Intervention of Archbishop Paul Gallagher at the United Nations High Level Meeting "Racism can and must be defeated through a culture of encounte..." - FULL TEXT 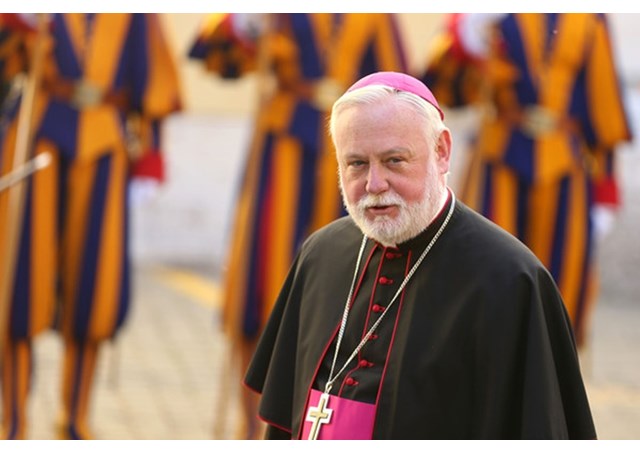 Published below is the intervention that H.E. Msgr.Paul Richard Gallagher, Secretary for Relations with States, pronounced at the High Level Meeting on the 20th anniversary of the adoption of the Durban Declaration and Plan of Action (DDPA), which is held in the context of of the 76th United Nations General Assembly in New York from 20 to 25 September 2021:

Secretary for Relations with States of the Holy See,
at the United Nations High-Level Meeting
to commemorate the 20th anniversary of the Durban Declaration and Programme of Action

The Holy See is pleased to participate in the High-level Meeting to commemorate the 20th anniversary of the Durban Declaration and Programme of Action, focusing on “reparations, racial justice and equality for people of African descent”.

As party to the International Convention on the Elimination of All Forms of Racial Discrimination, the Holy See, in accord with its particular nature and mission and in a spirit of cooperation, is engaged in combating all forms of racism, racial discrimination, xenophobia and related intolerance.

Racism is rooted in the erroneous and evil claim that one human being has less dignity than another. This not only disregards the truth that “all human beings are born free and equal in dignity and rights,”[1] but also the foundational ethical summons to act toward “one another in a spirit of brotherhood.”[2]

As Pope Francis noted in his Encyclical Letter Fratelli Tutti, our “social progress is not as real or definitive as we think,”[3] with racism regularly hiding beneath the surface “only to keep remerging.”[4]

Many persons of African descent around the world are migrants or refugees that after leaving their homes – or being forced to leave – face racism and xenophobia, discrimination and intolerance in countries of destination, rather than the support that they need. My Delegation hopes that the recent establishment of the Permanent Forum for People of African Descent will contribute to local, national and international efforts aimed at providing justice and support for victims of racism.

Universal human rights are indivisible and interdependent and thus cannot exist in opposition. Laws and norms that seek to root out discrimination and intolerance must therefore respect the right to freedom of opinion, thought, religion, and conscience. Monitoring, investigating, and prosecuting incidents of racism, racial discrimination, xenophobia and related intolerance should never become a justification for States to violate the human rights of minorities or to censor minority opinions.

Racism can and must be defeated through a culture of encounter, fraternity, and solidarity. While adopting international agreements and declarations such as the Durban Declaration are an important and necessary step, they must lead to real change through implementation by governments as well as through education and ethical media reporting, providing fact based and objective information in ways that respect the dignity of all and do not foster a divisive “us against them” mentality.

The Durban Declaration rightly expresses concern about intolerance, hostile acts, and violence against religious groups.[5] Intolerance on the basis of religion or belief leads to restrictions to the right to practice one’s chosen religion freely and in its most extreme forms can cause hostility, violence, and atrocity crimes. Disregard for the right to freedom of religion and belief leads to the violation of further human rights. In recent years, we have witnessed an overall rise in religious persecution by both State and non-State actors. Individuals and entire populations are discriminated against because of their faith while perpetrators often enjoy impunity. Some religious minorities in certain regions even face extinction, including Christians who represent the most persecuted group globally.[6]

Another form of discrimination is the insidious practice of eugenics. Today, we could say that a eugenic mentality often lurks behind artificial procreation techniques and the dark sides of pre-natal diagnostics, where the idea that there are human beings of inferior value because of disability, sex, or other traits often leads to the denial of their right to life. Such a mindset entrenches principles of discrimination squarely opposed to the Durban Declaration and cannot be ignored.

The Durban Declaration recognizes the role of religion in promoting the inherent dignity and worth of every person and in eradicating racism, racial discrimination, xenophobia and related intolerance.[7] This must be coupled with legislation and functioning institutions, but ultimately “racism will disappear…only when it dies in people’s hearts.”[8]

[8] Pontifical Council for Justice and Peace, The Church and Racism: Toward a More Fraternal Society, (Vatican City, 2001), 29.