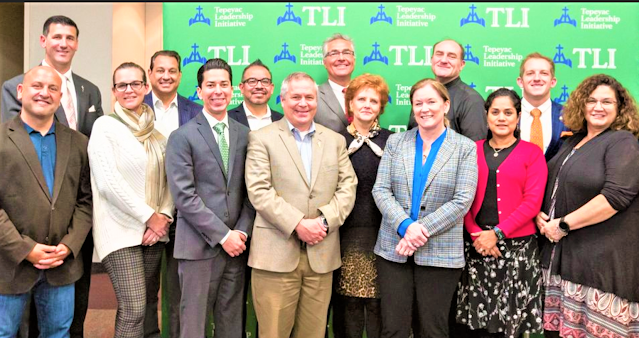 The Tepeyac Leadership Initiative is expanding!

Vision: With a spirit of charity, fidelity to the Magisterium and intellectual rigor, the Tepeyac Leadership Initiative is a catalyst development experience which equips lay Catholic professionals to become virtuous leaders, while supporting the mission of the Church, influencing the culture and serving the common good.

“This was one of my dreams for a long time; that we would have training and real leadership being built on being good professionals being a person of virtue and a person of faith,” said Bishop Thomas J. Olmsted at a reception following a Mass at the retreat center prior to the dinner. “We are already seeing it having a big impact in our own diocese, and now the Archdiocese of Los Angeles has invited us to help them begin the same thing there. That’s really wonderful.”

Individuals working in fields including religion, education, business, health care and public service completed the five-month program, which teaches students Church teachings and Biblical principles for growing in their faith while allowing it to influence their professional and personal lives.

The 18 sessions of the program take place on a virtual platform (From February to June). These live sessions are highly engaging, and interactive, and you participate from the comfort of your home or office. In addition to the weekly sessions, the program involves an all-day retreat. It takes place on a Saturday of April or May. The retreat is in-person. There is a virtual version of the retreat, but participants are highly encouraged to experience it in-person.

TLI coordinator Cristofer Pereyra said it is too early to gauge the expected turnout for the Los Angeles effort, but he sees this as just the potential beginning of branching into other dioceses.

“It’s a great way to start — it’s the largest archdiocese in the United States,” he said. “It will put us on the national stage [and] make it much easier to go into any other diocese.”

Tepeyac Leadership Initiative began in the Diocese of Phoenix in 2017, with the first class graduating the following year. Participants gain practical knowledge through the training as well as develop bonds with fellow classmates that help encourage them to grow and share their faith.

“The idea is by planting seeds through lay Catholic leadership, we are creating a more fertile ground for the Church to do what it does,” said Pereyra. “These people are not going out into the streets with a Bible. They are going to make the world a lot friendlier to the Gospel so the Church can continue its mission.”

“It was a fantastic experience, very special for me,” said graduate St. Thomas the Apostle parishioner Bill Fathauer, who has worked four years in government relations for the Arizona Deparment of Transportation. Not only has he gained a better understanding of his faith, but he’s been encouraged and inspired to live in the professional world as a Catholic, including being instilled with the truth that a loving God sees everyone — regardless of his or her opinion — as His creation.

“Working in politics, it’s very easy to view other people who have disagreements more like an enemy. It really opened my eyes,” he said. “I think it will make me better at my job because … I’m going to go [into a meeting] with an understanding of who they are; not this arbitrary person just existing.”