Nuncio Archbishop Pierre Tells US Bishops at Assembly "Pope Francis, then, is calling us to be a missionary Church that encourages everyone to be an evangelist." FULL TEXT + Video 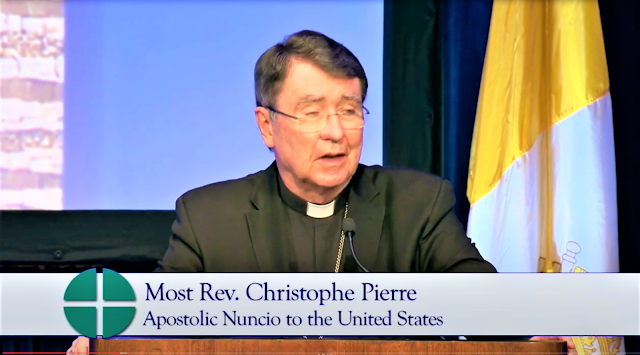 ADDRESS OF HIS EXCELLENCY ARCHBISHOP CHRISTOPHE PIERRE, APOSTOLIC NUNCIO TO THE UNITED STATES OF AMERICA, TO THE UNITED STATES CONFERENCE OF CATHOLIC BISHOPS PLENARY ASSEMBLY,
NOVEMBER 15, 2022
My Dear Brothers in Christ,
I greet you in the name of Pope Francis, assuring you of his closeness, fraternal support and prayers as you gather for this Plenary Assembly of the Episcopal Conference. I thank His Excellency José Gémez, Archbishop of Los Angeles and President of the USCCB and Father Fuller and the staff of the General Secretariat for the invitation to speak to you, as the Church in the United States continues to journey together. In a special way, I wish to acknowledge and thank Archbishop Gomez and Archbishop Allen Vigneron who are completing their terms as President and Vice President of the Conference.
(Starts at 16:28 on the Video below)

Archbishop Vigneron occasionally reminds me of an address I gave to you in which I asked, “So, where are we?” It is a question I frequently pose to the staff at the Apostolic Nunciature. I think it is necessary to answer the question so that, as we walk together on the Synodal path, we can also ask: “Where are we going?” This, I believe, is an important question, not only as you elect new leadership for your Conference, but also as you set out your strategic plan and pastoral priorities.
A Missionary Church
As Bishops, we walk together cum Petro et sub Petro. As we approach the 10" anniversary of the election of Pope Francis, it may be useful to reflect on some of the persistent themes of his Pontificate, which can offer us precious indications for our own way forward. In a short address to the General Congregation of Cardinals, before the 2013 conclave, then-Cardinal Jorge Bergoglio said:
“When the Church does not go out of herself to evangelize, she becomes self-referential and then she gets sick. [...] When the Church is self- referential, without realizing it, she believes she has her own light. She ceases to be the mysterium lunae and this gives rise to the grave evil of spiritual worldliness. [...] Simplifying, there are two images of the Church: either the evangelizing Church that comes out of herself, [...] or the worldly Church that lives in herself, of herself, for herself.” This captures the approach that Pope Francis has been trying to encourage over these 10 years.
Beginning with his first Apostolic Exhortation, Evangelii Gaudium, Pope Francis encouraged us to be a missionary Church that goes forth to announce the joyful message, more deeply committed to her mission than to maintenance of structures that may no longer adequately serve the mission. He writes:
I dream of a “missionary option”, that is, a missionary impulse capable of transforming everything, so that the Church’s customs, ways of doing things, times and schedules, language and structures can be suitably channeled for the evangelization of today’s world rather than for her self-preservation (Pope Francis, APOSTOLIC EXHORTATION EVANGELII GAUDIUM, 24 NOVEMBER 2013, 27).
Pope Francis proposes the image of “a poor Church for the poor”, a Church close to the abandoned and forgotten, a Church which conveys the tenderness of God. He proposes an evangelical Church, called to measure itself constantly against the breadth and richness of the Gospel, a Church willing to go forth from its comfort zone (cf. EG, 20). In an early interview, also in 2013, he said: “Evangelizing, in fact, is the grace and vocation proper to the Church, her deepest identity. She exists to evangelize.” (ANTONIO SPADARO, "INTERVIEW WITH PAPA FRANCESCO," IN La Civitta Cattolica 2013 II] 449-477.)
Thus, the synodal process, as well as the Pope’s encyclicals and exhortations should be understood in a missionary key. A question for us, my brother Bishops: does the Church in the United States understand herself in this way, especially as we live through a time of accelerated change?
A helpful way of answering this question may be to examine how well our local churches embody the characteristics of an evangelizing community, described in Evangelii Gaudium, 24: Do we go forth and take the initiative? Do we get involved? Do we accompany others, showing patience? What are the fruits that we are seeing from our evangelizing efforts? Finally, do our local churches demonstrate the joy, which flows from the Eucharist?
The Eucharistic Revival, currently underway, affords an opportunity for the Church in the United States to experience and celebrate the nuptial joy of a community that is loved by the Lord, of a community that evangelizes and that is herself evangelized. Let the Eucharistic Revival be lived in this light — as an evangelizing moment!
Pope Francis points out that there are barriers to this experience of joy and to the Church’s evangelizing efforts. One such barrier is our own internal structures which are always in need of pastoral and missionary conversion for evangelization, rather than for the Church’s self-preservation. (cf. EG, 25, 27).
A second barrier is sin; hence, the Holy Father speaks of the Church, using the image of the “field hospital”: