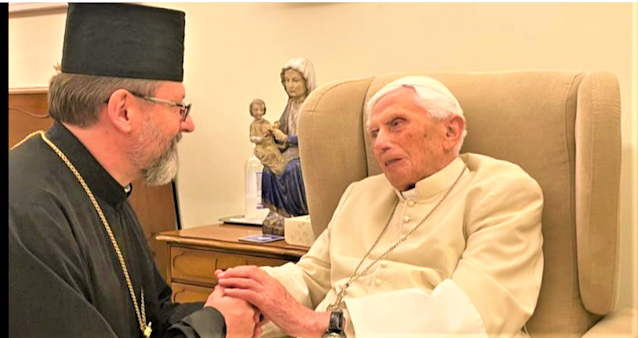 Pope Emeritus Benedict XVI received the Major Archbishop of Kiev Sviatoslav Shevchuk, head of the Ukrainian Greek Catholic Church.
The Pope Emeritus replied that he was following the situation closely and continued to pray for peace in Ukraine.

The last meeting between the two took place in February 2019. Benedict XVI had both appointed the bishop and confirmed his election as Major Archbishop in 2011.

Grand Archbishop Shevchuk has been in Rome since the beginning of the week. On Monday he met Pope Francis. As a gift, Shevchuk presented the Pope with a fragment from a Russian mine. The fragment of a mine that destroyed the facade of a church in Irpin in March is a "visible sign of the destruction and death that war brings every day," said the Major Archbishop of Kiev after the meeting. In the Vatican he also wants to speak to Cardinal Secretary of State Pietro Parolin and some ambassadors to the Holy See.