Saint November 12 : St. Josaphat whose Pious Zeal made many Converts - an Archbishop and Martyr - Patron of Ukraine and Unity 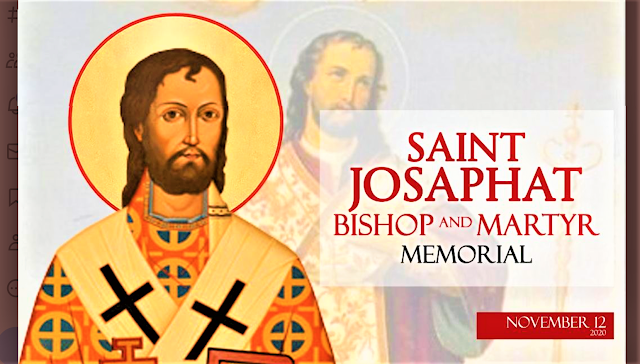 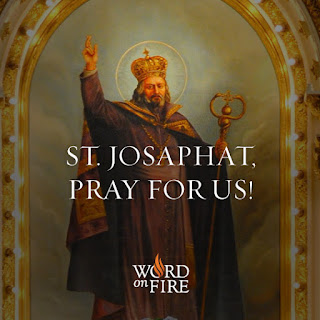 Of Ruthenian heritage, Josaphat's father had devoted himself to commercial pursuits, and held the office of town-councilor. Both parents contributed to implant the seeds of piety in the heart of their child. In the school at Volodymyr Josaphat — Johannes was the saint's baptismal name — gave evidence of unusual talent; he applied himself with the greatest zeal to the study of ecclesiastical Slav, and learned almost the entire casoslov (breviary), which from this period he began to read daily. From this source he drew his early religious education, for the unlettered clergy seldom preached or gave catechetical instruction. Owing to the straitened circumstances of his parents, he was apprenticed to the merchant Popovyc at Vilna. In this town, remarkable for the corruption of its morals and the contentions of the various religious sects, he seemed specially guarded by Providence, and became acquainted with certain excellent men (e.g. Benjamin Rutski), under whose direction he advanced in learning and in virtue.
Great were the virtues of the saint. As a boy he shunned the usual games of childhood, prayed much, and lost no opportunity of assisting at the Divine services. Children especially regarded him with the greatest affection, and found in him a worthy model. As an apprentice, he devoted every leisure hour to prayer and study. At first Popovyc viewed this behaviour with displeasure, but Josaphat gradually won such a position in his esteem, that Popovyc offered him his entire fortune and his daughter's hand. But Josaphat's love for the religious life never wavered. At first without a human guide along the paths of virtue, he received all spiritual direction immediately from the Holy Ghost.
His favourite pious exercise was to make a poklony (i.e. a reverence, in which the head touches the ground) with the ejaculation: "Jesus Christ, Son of God, have mercy on me, a poor sinner." Never eating meat, he fasted much, wore a hair-shirt and an angular chain, slept on the bare floor, and chastised his body until the blood flowed. The Jesuits frequently urged him to set some bounds to his austerities.
At the age of twenty-four (1604) he entered the Basilian monastery of the Trinity at Vilna. The fame of his virtues rapidly spread, and distinguished people began to visit him. After a notable life as a layman, Rutski also joined the order, bringing with him a wide erudition. When Josaphat reached the diaconate, regular services and labour for the salvation of souls had been already begun; the number of novices steadily increased, and under Rutski — who had meanwhile been ordained priest — there began the regeneration of religious life among the Ruthenians. In 1609, after private study under the Jesuit Fabricius, Josaphat was ordained priest. He subsequently became superior in several monasteries, and on 12 November, 1617, was reluctantly consecrated Bishop of Vitebsk, with right of succession to the Archbishopric of Polotsk. He became archbishop in 1618.
From his zealous study of the liturgical books he drew many proofs of Catholic truth, using his knowledge in the composition of several works — "On the Baptism of St. Volodymyr"; "On the Falsification of the Slavic Books by the Enemies of the Metropolitan"; "On Monks and their Vows". As deacon, priest, and bishop, he was distinguished by his extraordinary zeal in the service of souls. Not alone in the church did he preach and hear confessions, but likewise in the fields, hospitals, prisons, and even on his journeys. Even where his words of instruction might by themselves have failed, his entreaties and tears ensured him success. This zeal, united with his kindness and extraordinary love for the poor, won numbers to the Catholic Faith. Among his converts were included many important personages such as Ignatius, Patriarch of Moscow, and Emmanuel Cantacuzenus, who belonged to the family of the Greek Emperor Palæologus.
As archbishop he restored the churches; issued a catechism to the clergy with instructions that it should be learned by heart; composed rules for the priestly life, entrusting to the deacons the task of superintending their observance; assembled synods in various towns in the dioceses, and firmly opposed the Imperial Chancellor Sapieha, when he wished to make many concessions in favour of the schismatics. Throughout all his strivings and all his occupations, he continued his exemplary life as a religious, and never abated his zeal for self-mortification and prayer. He awaited death with a certain yearning, refusing to avail himself of the opportunity of flight afforded him.
While each succeeding year saw fresh evidence of his fruitful labours, it also witnessed the steady growth of the hatred of the schismatic party. Finally on 12 November, 1623, an axe-stroke and a bullet brought Josaphat his martyr's crown. After numerous miracles had occurred, a commission was appointed by Urban VIII in 1628 to inquire into the cause of Josaphat, and examined on oath 116 witnesses. Although five years had elapsed since Josaphat's death, his body was still incorrupt. In 1637 a second commission investigated the life of the martyr, and in 1643 — twenty years after his death — Josaphat was beatified. His canonization took place in 1867.

After his death his influence was still greater: conversions were numerous, and veneration for him continued to extend. His feast is kept on the first Sunday after 12 November, according to the Julian Calendar. Note: His feast is currently kept on November 12 on the Universal Calendar.
The Catholic Encyclopedia
Image Screenshot from  Archdiocese of Manila Office of Communications.
Daily Saint Patron Saints Saint Biographies Saints Saints of November Ukraine Ukraine Catholic Church