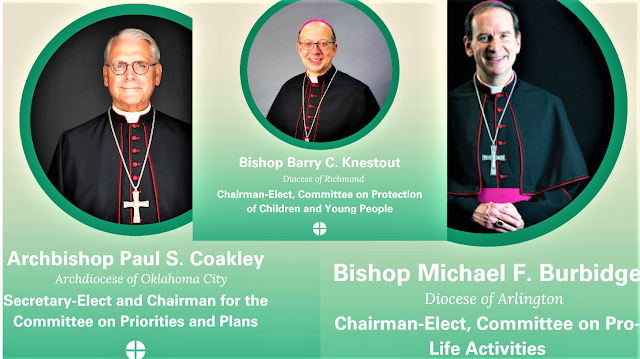 On November 16th, the U.S. Conference of Catholic Bishops announced the election results for their committee chairmen. On day 1 of the assembly, Archbishop Timothy P. Broglio, age 70, was elected as President-Elect of the United States Conference of Catholic Bishops over Archbishop William E. Lori. Archbishop Lori, age 71, was elected as Vice-President Elect.
Both assume office immediately following the Fall Plenary. Today, the bishops elected Archbishop Paul S. Coakley of Oklahoma City as Conference secretary and chairman of the Committee on Priorities and Plans in a 130-104 vote over Cardinal Joseph W. Tobin, CSsR, of Newark. Archbishop Coakley fills the vacancy that is left as Archbishop Broglio who has been serving as USCCB secretary since 2019, assumes the Conference presidency.

(UPDATED with USCCB Info) The U.S. Conference of Catholic Bishops (USCCB) has also elected the chairs of seven standing committees at their Fall General Assembly in Baltimore.

Bishop Michael F. Burbidge of Arlington was elected as chairman of the Committee for Pro-Life Activities in a 174-63 vote over Bishop W. Sean McKnight of Jefferson City, and fills the vacancy created with the election of Archbishop Lori as Conference vice-president. He assumes his post at the end of this year’s Fall General Assembly and will serve through November 2024, at which time he will be eligible for re-election.

Bishop Thomas John Paprocki of Springfield in Illinois, as chairman-elect of the Committee on Canonical Affairs and Church Governance in a 147-91 vote over Bishop Alfred A. Schlert of Allentown.

Bishop Joseph C. Bambera of Scranton, as chairman-elect of the Committee on Ecumenical and Interreligious Affairs in a 128-111 vote over Bishop Peter L. Smith, auxiliary bishop of the Archdiocese of Portland in Oregon.

Archbishop Charles C. Thompson of Indianapolis, as chairman-elect of the Committee on Evangelization and Catechesis in a 149-90 vote over Bishop William D. Byrne of Springfield in Massachusetts.

Bishop Abdallah Elias Zaidan, MLM, of the Maronite Eparchy of Our Lady of Lebanon, as chairman-elect of the Committee on International Justice and Peace in a 148-95 vote over Archbishop Nelson J. Pérez of Philadelphia.

Bishop Barry C. Knestout of Richmond, as chairman-elect of the Committee on the Protection of Children and Young People in a 127-114 vote over Bishop Elias R. Lorenzo, OSB, auxiliary bishop of the Archdiocese of Newark.