Wow LISTEN to the Beautiful Music Hidden in the Mantle of Our Lady of Guadalupe! 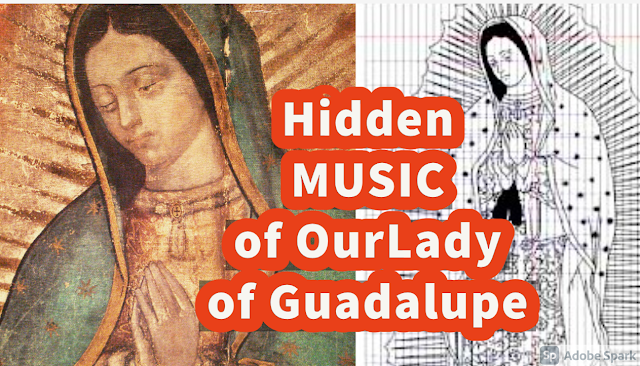 Hidden Music was discovered in the mantle of the Virgin of Guadalupe.

The symphonic work is entitled, "Music in the mantle of the Virgin of Guadalupe."

The work is based on the musical notes and melody found by Ojeda Llanes after nearly 23 years of research carried out on the mantle, stars and flowers of the Virgin of Guadalupe.

There were 61 musicians on stage, including members of the Vienna Music Choir, directed by Mtra. Nidia Gongora.

Ojeda Llanes recalled that in 1990, after reading a magazine about the beatification of Saint Juan Diego, he undertook the task of investigating the apparitions of the Virgin of Guadalupe, knowing the historical context and corroborating her existence.

—The Higher Institute of Guadalupanos Studies gives me the mission to study the image applying the only science that had not been done before in the studies of the image, Mathematics. I am a mathematician and I have even taken out about five books on this science and I began to investigate and went to the origin of Mathematics, to Pythagoras, that Greek sage. Pythagoras pointed out that where there is perfect symmetry there is music; The previous studies carried out on the image of the Virgin of Guadalupe show that the stars of the mantle are the constellations of the sky at the time of its impregnation, as well as the position of Jupiter that morning and the symmetry of the flowers of the Guadalupano mantle proportionally represent the main hills and volcanoes of the orography of Mexico; If the whole image is in the golden ratio, then it has perfect symmetry, therefore it has music, he said.

He pointed out that Pythagoras was the one who discovered the musical scale and had taken it from the position and sounds of hammers placed in a certain way.

—Therefore, the position of the elements that gave the image perfect symmetry had to be used to find the music. This led me to design a mathematical model as follows:

place the proportionally reduced image in the center of a golden rectangle; the mantle has 46 stars; 46 lines were drawn, each corresponding to each star: one in the center of the image, 23 starting from the center to the left and another 23 from the right side in such a way that there were millimetrically equal spaces between line and line and each line or space it corresponded to a certain star of the mantle or flower center of the dress; As their positions were different, I considered that each star according to its position and each flower center according to its position was a certain musical note.

Based on this mathematical model, I resorted to a music expert who proportionally placed the drawing of a piano on top of the golden rectangle that covered the image, taking care to place the central “C” in the center, in such a way that the proportional drawing of the A piano from a life-size one indicated the respective musical note that was drawn in a ruled notebook, respecting the exact position of the stars and the centers of the flowers.

The musical notes already expressed in a ruled notebook were placed in a musical computer program and the surprise was great to hear a beautiful musical harmony that is definitely heavenly sound. In the apparitions, Saint Juan Diego reported hearing a beautiful melody, he indicated.

—Now, since the discovery was made by a Yucatecan, it was commissioned to Mtro. Carlos Milan the project of making the arrangements of this "perfect harmony", a major challenge given that critics and the eyes of the world will be on this work which adds to the vast repertoire of universal sacred music composed and created by great masters.