Saint January 20 : Bl. Cyprian Michael Iwene Tansi a Priest from Nigeria who Ministered to the Poor, the Lonely, and the Sick 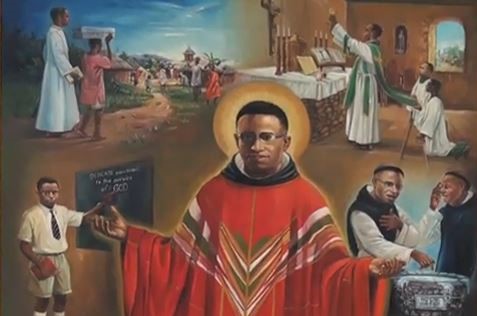 This Saint was Born on September, 1903, in Aguleri, Anambra, Nigeria.
Died:
January 20, 1964, Leicester, England
Beatified:
March 22, 1998 by Pope John Paul II
Bl. Cyprian Iwene Tansi was born in Nigeria, Africa, in 1903. His parents were not Christians, but they sent Iwene to a school run by Catholic missionaries. There he learned about Jesus and made the decision to become a follower of Christ. He received the name Michael when he was baptized.
Teachers were needed for the Catholic schools founded by the missionaries, so Michael decided to become a teacher. He earned his teaching certificate when he was only 16. He taught for several years and even became a headmaster, or principal. Michael’s work was satisfying, but he wanted to do more to help others to find Christ.Michael entered St. Paul’s Seminary at Igbarium in 1925. After ordination in 1937, he served as a parish priest in several villages. It was important for him to know all his parishioners, so he traveled on foot or on his bicycle to minister to the poor, the lonely, and the sick. He had a special interest in preparing young women for marriage. With the help of local nuns, the women were taught about Christian marriage and how to care for the children they would have.Michael longed for the chance to spend more time in quiet prayer. He bishop gave him permission to join an order of Trappist monks in England. In the monastery, Michael took the name “Father Cyprian.” He hoped that one day he would be able to open a Trappist monastery in Nigeria.After many prayerful years in the monastery, Father Cyprian died in 1964. His body was returned to his homeland for burial in 1986.Father Cyprian was declared “Blessed” by Pope John Paul II in 1998 in ceremonies in Nigeria.