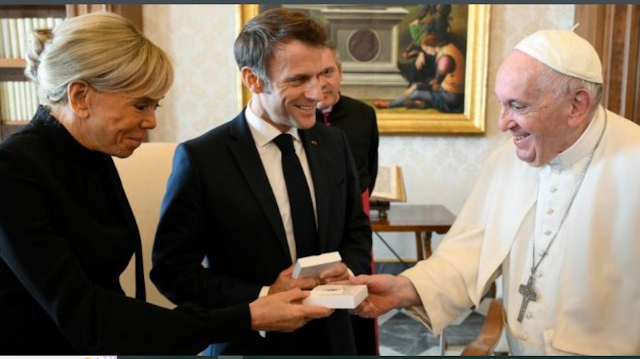 Pope Francis met with the President of France, Emmanuel Macron and his wife, Brigitte Macron, on October 24th. This was their third private audience at the Vatican. They discussed the promotion of peace in a world overtaken by war, especially the war in Ukraine.
According to a statement from the Holy See Press Office, the conversations were cordial and were focused on the ongoing war in Ukraine. "During the cordial discussions, which took place in the Secretariat of State," it said, "the parties focused on matters of an international nature, starting from the conflict in Ukraine, with special attention to the humanitarian situation." "Particular consideration," it continued, "was given to the region of the Caucasus, the Middle East, and Africa."
President Macron later met with Vatican Secretary of State, Cardinal Pietro Parolin, and Vatican Secretary for Relations with States and Multilateral Organizations, Archbishop Paul Richard Gallagher.
The audience with the Pope in the Apostolic Palace was nearly an hour, and there was the customary exchange of gifts. The Pope gifted a collection of his works, as well as a bronze medallion representing Saint Peter and the colonnade. The papal documents included this year's Message for Peace, the Document on Human Fraternity, and the book on the Statio Orbis of 27 March 2020, during the Covid-19 pandemic.
The French President gifted the Pope a first edition, in French, of the book For Perpetual Peace by German philosopher Emmanuel Kant. On Sunday, President Macron was among the opening speakers at the Rome-held ‘Spirit of Assisi’ event, sponsored by the Community of Sant’Egidio. The three-day annual peace event, whose theme this year as war wages on in Ukraine is ‘The Cry for Peace,’ will conclude with the speech and participation of Pope Francis on Tuesday at the Colosseum at the prayer for peace.
President Macron also met with Italy's new Prime Minister, Giorgia Meloni.

The French president had previously visited the Pope in November 2021 and in June of 2018.  Over the years, the Pope and French President have also had several phone calls, including when the Pope expressed his condolences for the 2020 stabbing attack at the Notre Dame Cathedral de Nice, where three people were killed; and when the French President contacted the Pope to emphasize the significance of his Apostolic Visit to Iraq in 2021. Edited from Vatican News with Screenshot
Emmanuel Macron France Pope Francis