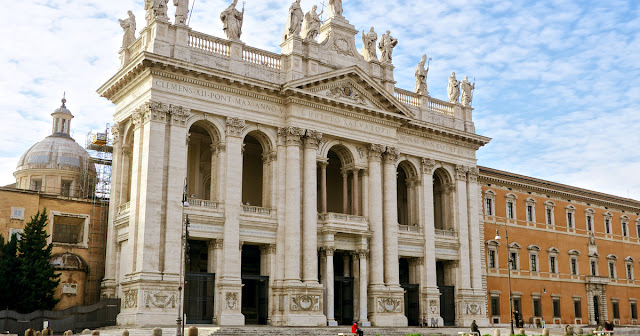 This is the oldest, and ranks first among the four great "patriarchal" basilicas of Rome. The site was, in ancient times, occupied by the palace of the family of the Laterani. A member of this family, P. Sextius Lateranus, was the first plebian to attain the rank of consul. In the time of Nero, another member of the family, Plautius Lateranus, at the time consul designatus was accused of conspiracy against the emperor, and his goods were confiscated. Juvenal mentions the palace, and speaks of it as being of some magnificence, "regiæ ædes Lateranorum". Some few remains of the original buildings may still be traced in the city walls outside the Gate of St. John, and a large hall decorated with paintings was uncovered in the eighteenth century within the basilica itself, behind the Lancellotti Chapel. A few traces of older buildings also came to light during the excavations made in 1880, when the work of extending the apse was in progress, but nothing was then discovered of real value or importance. The palace came eventually into the hands of Constantine, the first Christian emperor, through his wife Fausta, and it is from her that it derived the name by which it was then sometimes called, "Domus Faustæ". Constantine must have given it to the Church in the time of Miltiades, not later than about 311, for we find a council against the Donatists meeting within its walls as early as 313. From that time onwards it was always the centre of Christian life within the city; the residence of the popes and the cathedral of Rome. The latter distinction it still holds, though it has long lost the former. Hence the proud title which may be read upon its walls, that it is "Omnium urbis et orbis ecclesiarum mater, et caput".