Pope Francis Meets the Head of the Catholic Church in Ukraine, Archbishop Sviatoslav Shevchuk who said, "I am alive, this is the greatest miracle." - VIDEO 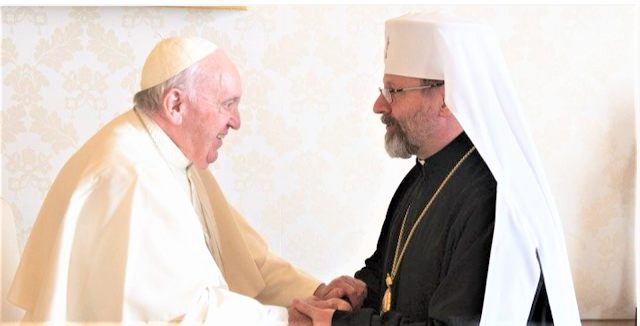 Pope Francis received the Head of the UGCC in the Vatican.
In the message of the secretariat of the Head of the UGCC in Rome, His Beatitude Sviatoslav presented the suffering of the Ukrainian people and the Church's service to alleviate them, and Pope Francis encouraged pastors to be patient in the service of closeness and presented the efforts of the Holy See aimed at ending the war and promoting the establishment just peace.
Vatican News reported that on Monday, November 7, 2022, Pope Francis received at the Apostolic Palace in the Vatican the Head of the Ukrainian Greek Catholic Church His Beatitude Sviatoslav, who is on a working visit to the Apostolic Capital. This is the first such visit of the Supreme Archbishop of Kyiv-Halytskyi after the beginning of the large-scale Russian invasion of Ukraine.
In a message from the Secretariat of the Head of the UGCC in Rome, it is noted that His Beatitude Svyatoslav brought as a gift to the Holy Father a piece of a Russian mine that damaged the facade of the Greek Catholic church in Irpen, as a symbolic gift, not only in view of the fact that it reminds of one of the first "cities -martyrs", but also due to the fact that similar pieces are removed from the bodies of soldiers and civilians, in particular, children, which is a visible sign of the destruction and death that war brings every day.
According to the Head of the UGCC, the Pope once again expressed his closeness to the Ukrainian people, assuring that he is close to them in prayer and concrete actions. He encouraged the Supreme Archbishop and pastors to be patient in the ministry of evangelical intimacy with the suffering people oppressed by the violence of war. The message of the secretariat also states that the Pope emphasized the efforts of the Holy See aimed at putting an end to aggression and promoting a just peace, as well as efforts aimed at supporting solidarity with the Ukrainian people.
His Beatitude Svyatoslav, in turn, said that he wanted to bring the appeal of the Ukrainian people to the Pope. He also presented to the Pope the Church's efforts to support the people in the war, about his visits to communities affected by the war in the center, east and south of the country. The Holy Father was also presented with a pastoral plan for 2023, in the center of which is service to the weakest, reception and support of displaced persons, treatment of wounds caused by war. The Supreme Archbishop pointed to the colonial dimension of the war against Ukraine, emphasizing the inadmissibility of peace proposals that include denying the right to exist of the Ukrainian people and state within its internationally recognized borders.
The head of the UGCC thanked the Pope for everything that was done to stop the war, to mediate for peace, to release prisoners and hostages, to organize the general solidarity of the Catholic Church in support of the suffering Ukrainian people.
Source: Vatican News - Ukrainian
Archbishop Sviatoslav Shevchuk Ukraine Ukraine Catholic Church