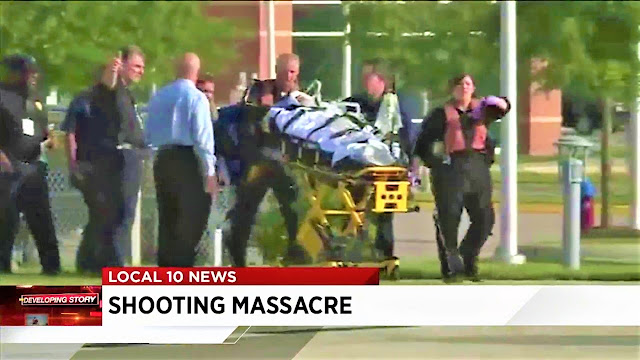 Authorities used a Saturday morning news conference to focus on the victims and said they would not be referring to the gunman by name in future. They said Craddock had about 15 years' experience as an engineer with the city.
Among the dead were eight men and four women. Most were city employees but one was a contractor trying to fill a permit at the public works building, city manager Dave Hansen said at the news conference.
Virginia Beach Police Chief James Cervera said the gunman opened fire on three floors before he engaged in a "running gunbattle" with four police officers.

"This was a long-term, large gunfight," he said.

Four people were wounded in Friday's shooting, including a police officer whose bulletproof vest saved his life, Cervera told reporters on Friday.

The shooting happened shortly after 4 p.m. when the veteran employee of the Public Utilities Department entered a building in the city's Municipal Center, and "immediately began to indiscriminately fire upon all of the victims," Cervera said.

Police entered the building and got out as many employees as they could, then exchanged fire with the suspect, who was armed with a .45-calibre handgun with a suppressor, the chief said, adding that officers gave the suspect first aid after he was shot, but he died.
Police initially said the gunman shot and killed 11 people, including one who was found inside a vehicle outside the municipal building. Cervera later said one more died on the way to the hospital. The shooting sent shock waves through Virginia Beach, the state's largest city and a popular vacation spot in southeastern Virginia.
Edited from CBC.ca
Image Source: Screen shot
Posted by Jesus Caritas Est at 11:44 AM