Bishop in Nicaragua suggests an "ethical decalogue" for politicians; Hopes for Release of all Political prisoners 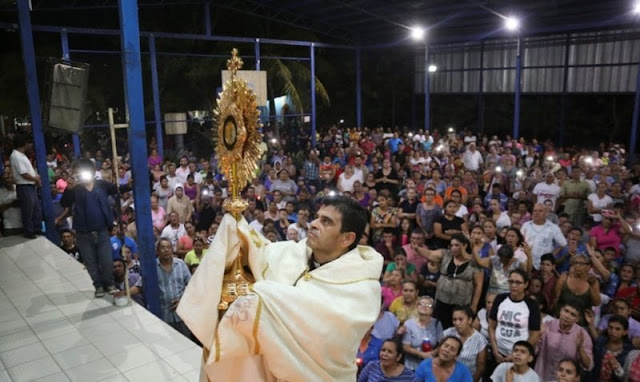 The Bishop of Matagalpa presents an "ethical decalogue" for politicians; the release of all prisoners is still awaited


Matagalpa (Agenzia Fides) - The passage of the Gospel proclaimed during Masses last Sunday, the "discourse of the mountain" (Mt 5.17-37) which deals with the subject of the fulfillment of the law, gave the cue to Msgr. Rolando José Alvarez Lagos, Bishop of Matagalpa, to present an ethical decalogue to politicians in the country to follow.
During the homily of the Mass celebrated in the Cathedral, Mgr. Alvarez, with the clear and direct style that characterizes him, said: "First: do not disqualify the other; second: do not criticize him in a destructive way; third: do not judge him in an incorrect way; fourth: respect his dignity; fifth: respect his privacy, his integrity and his family life; sixth: respect the opinions of the other; seventh: recognize that we all need each other; eighth: always look for points of consensus; ninth: consider Nicaragua as the greatest and main common good; tenth: overcome evil with good".
Nicaragua still lives in a situation of strong tension due to the lack of freedom in all senses. Not even the news of the upcoming elections has brought serenity to families who have a family member in prison without a real accusation. Nobody knows the exact number of political prisoners, but it is well known that there are many. As the note sent by a local Fides source informs, the news of the release, on February 13, of eight political prisoners by the Orteguista regime, certainly provoked satisfaction among the groups that ask for the release of prisoners of conscience, but the family members of prisoners continue to demand the unconditional release of all citizens who are detained in the country's various penitentiaries.
Brenda Gutiérrez, president of the Committee for the Liberation of Political Prisoners, told the local press that although no one should be thanked because freedom is a right, the intervention of the Apostolic Nuncio, Archbishop Waldemar Sommertag, must be acknowledged who was the only one able to make himself heard by the couple who governs Nicaragua, President Daniel Ortega and Vice President Rosario Murillo, his wife. Brenda Gutiérrez added: "It is a terrible situation. There is no freedom, it seems that we are kidnapped in our own country".
According to Alianza Civica there are still 61 political prisoners. Brenda Gutiérrez stressed that "although the Grand Coalition of the opposition is concerned about defining the electoral reform in view of the upcoming elections, we cannot forget those who suffer unjustly in prison". (CE) (Agenzia Fides, 17/2/2020)
Posted by Jesus Caritas Est at 12:00 PM