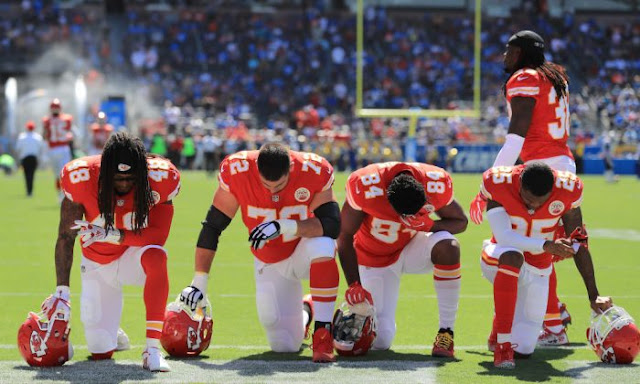 The Kansas City Chiefs are world champions after winning Super Bowl LIV in Miami, Florida, defeating the San Francisco 49ers 31 - 20 on February 2, 2020.
After the win, Chiefs Chairman and CEO Clark Hunt said, "I want to thank the Lord for blessing us with all these incredible people to bring this trophy home."
Players from both teams are open about faith and how it helps them with their careers and keep things in perspective.
CBN reported that after a Bungee Jump nearly left him paralyzed Chiefs Quarterback Patrick Mahomes was named MVP of the Super Bowl, carrying the ball into the end zone on his own for one of the Chiefs' crucial touchdowns. He's one of the most dynamic players in the league and he says his faith in God is the source of his success. "Doing what I do every single day, and then knowing that as long I'm doing everything the right way, the way that He'd want me to do it, then I can walk off the field with my head held high and be able to be the man that I'm supposed to be. It's given me a lot of blessing in my life and I'm trying to maximize and glorify Him in everything I do," said Mahomes.
Patrick Mahomes Faith and Family Message

Fox reports that  The Chiefs weren't initially sure if there would be an extra plane ticket for the team's Catholic chaplain. But, Fr. Richard Rocha the team chaplain did perform the Mass at night for the team. Fr. Rocha, has a football background - He played football at Benedictine College in Atchison, Kansas, and coached high school and college football before joining the seminary. He also serves as the Royals' Catholic chaplain.
****** According to Sports Spectrum the Kansas City Chiefs CEO Clark Hunt: 'My identity is my faith in Christ' Clark Hunt, chairman and CEO of the Kansas City Chiefs. The Kansas City Chiefs may be one win away from their first Super Bowl appearance in 50 years, but Chiefs owner/CEO Clark Hunt has other goals in mind beyond athletic success. “We want our employees to develop spiritually,” Hunt said in October. "My identity is my faith in Christ.”

Kansas City Chiefs kicker Harrison Butker, is very open on social media and in public about his love of the Church—particularly for Sacred Liturgy.  Butker describes how experiencing Masses at the university’s Catholic Center gave him a new view of Catholicism. “There was reverence,” he said, “It didn’t feel like we just made this up. There is tradition in our liturgy. It is set apart from the world.” Butker also says his new appreciation of the faith was influenced  the preaching and ministry of Father Joshua Allen, the Georgia Tech campus chaplain. “He didn’t shy away from Catholic truths,” Butker said. “He spoke in a charitable way, but in a way that made you hear the truth. You heard what the Catholic Church teaches and why.” . Harrison Butker said, “The summit of our faith is the Eucharist. That’s what makes us Catholic. You become Catholic because you believe in the Real Presence. A priest who celebrates the liturgy well believes what he is doing.” Butker is beginning his third season with the Chiefs and, along with his wife Isabelle and their newborn son, James, with St. Mary’s as his parish.
During the football season, Butker is not always able to attend Sunday Mass in a parish setting, but he has been working with the Chief’s chaplain, Father Richard Rocha, to provide more beautiful and well-prepared Masses for the Catholic coaches and players each Saturday evening at the team hotel. Butker hopes to continue to promote the Sacred Liturgy in the Kansas City area, but as a new father,  “You can witness through your life, but you also need to witness through catechesis, which comes through education,” he said. “And, as the father of the family it’s my responsibility to pass on the truths of the faith to my children.”