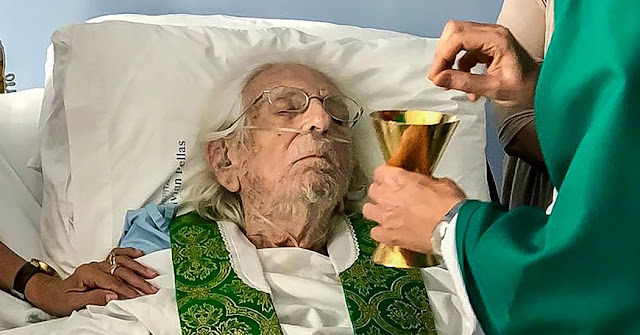 The controversial Nicaraguan liberation theologian Fr. Ernesto Cardenal died on March 1st, 2020 at the age of 95. The priest-poet was suspended from the priesthood because of his political engagement in 1985, and Pope Francis lifted the suspension in 2019. The politically left-wing Cardenal was temporarily a minister of the then revolutionary government of Nicaragua.
Fr. Ernesto was able to celebrate Mass again after 35 years. His homeland of Nicaragua, considers him one of its best writers and poets. The priest was Minister of Culture during the Sandinista government. Pope John Paul II publicly confronted him in 1983, while in Nicaragua. The Vatican suspended Cardenal a divinis in 1984, since he wouldn't leave his political office. Pope Francis lifted the sanction last year at the old priest's request to celebrate Mass again.
Posted by Jesus Caritas Est at 10:01 AM