At Mass, Pope Francis says "St. John Paul II was a man of God because he prayed , and prayed a lot." 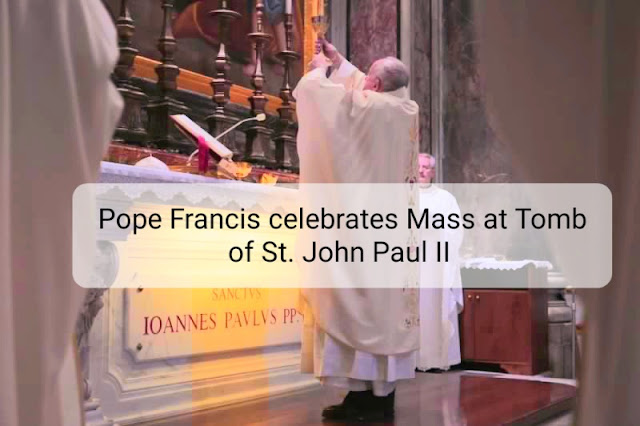 HOLY MASS IN MEMORY OF THE CENTENARY OF THE BIRTH
OF ST. JOHN PAUL II
HOMILY OF THE HOLY FATHER FRANCIS
Vatican Basilica - Altar of St. John Paul II
Monday, May 18 2020

"The Lord loves his people" ( Ps . 149,4), we sang, it was the refrain of the interleectional song. And also a truth that the people of Israel repeated, he liked to repeat: "The Lord loves his people." And in bad times, always "the Lord loves"; one has to wait for how this love will manifest. When the Lord sent, for this love, a prophet, a man of God, the reaction of the people was: "The Lord has visited his people " (cf. Ex 4:31), because he loves him, he has visited him. And the same said the crowd that followed Jesus seeing the things Jesus did: "The Lord has visited his people" (cf. Lk 7:16).
And today we can say here: a hundred years ago the Lord visited his people. He sent a man, prepared him to be a bishop and to lead the Church. Recalling St. John Paul II we take up this: "The Lord loves his people", "the Lord has visited his people"; sent a pastor.
And what are, let's say, the "traces" of a good shepherd that we can find in St. John Paul II ? So many! But let's just say three. Since they say that Jesuits always say things to three, let's say three: prayer, closeness to the people, love of justice. St. John Paul II was a man of God because he prayed , and prayed a lot. lot But how come a man who has so much to do, so much work to guide the Church ..., has so much prayer time? He knew well that the first task of a bishop is to pray. And this not told Vatican II, he said San Pietro, when they made deacons, said: "And we bishops, prayer and preaching the Word" (cf. Acts6.4). The first task of a bishop is to pray, and he knew it, he did it. Model of bishop who prays, the first task. And he taught us that when a bishop does an examination of conscience in the evening he must ask himself: how many hours have I prayed today? Praying man.
Second track, man of closeness . He was not a man detached from the people, on the contrary he went to find the people; and he traveled the whole world, finding his people, looking for his people, getting close. And closeness is one of the traits of God with his people. Recall that the Lord says to the people of Israel: "Look, what people have had their gods as close as I am with you?" (cf Dt 4,7). A closeness of God to the people which then becomes narrow in Jesus, becomes stronger in Jesus. A shepherd is close to the people, on the contrary, if he is not he is not a shepherd, he is a hierarch, he is an administrator, perhaps good, but he is not a shepherd. Proximity to the people. And St. John Paul II he gave us the example of this closeness: near the big and small, near and far, always close, he made himself close.
Third track, love for justice . But full justice! A man who wanted justice, social justice, justice of peoples, justice that drives wars away. But full justice! This is why St. John Paul II was the man of mercy, because justice and mercy go together, they cannot be distinguished [in the sense of separating], they are together: justice is justice, mercy is mercy, but one without the other it's not found. And speaking of the man of justice and mercy, we think what St. John Paul II did to make people understand the mercy of God. We think how he carried out devotion to Saint Faustina [Kowalska] whose liturgical memory from todayit will be for the whole Church. He had heard that God's righteousness had this face of mercy, this attitude of mercy. And this is a gift that he left us: justice-mercy and right mercy .

Let us pray to him today to give all of us, especially the pastors of the Church but to all, the grace of prayer, the grace of closeness and the grace of justice-mercy, mercy-justice.
FULL TEXT + Image Source: Vatican.va - Translation from Italian
Posted by Jesus Caritas Est at 8:37 AM