RIP Famous TV Host Regis Philbin, who was Catholic and will have Funeral Service at Notre Dame - Rare Interview with Cardinal 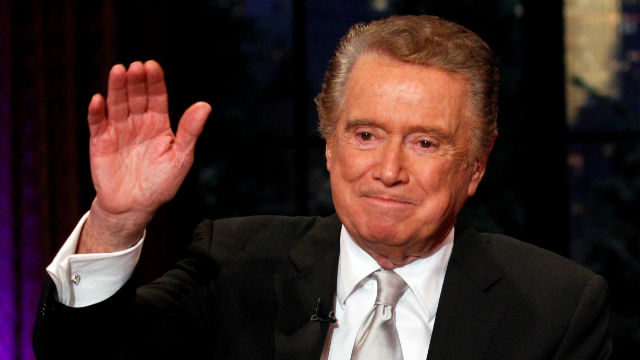 Regis Philbin the famous TV host has died of natural causes on Friday, July 24, 2020 at the age of 88. Regis was born on August 25, 1931, in Manhattan. His father, Francis Philbin, a U.S. Marine was of Irish heritage. His mother, Filomena (born Boscia), was from an Italian immigrant family of ethnic Albanians. Philbin had a Catholic upbringing and was an alter boy. He had one brother, Frank M. Philbin, born on March 1, 1951 and who died on January 27, 2007. He attended  the University of Notre Dame, where he graduated in 1953 with a sociology degree. He later served in the United States Navy, and he then had varied television and radio jobs before broadcast Television.

Former television host Regis Philbin will have a funeral service and be buried on the campus of Notre Dame, according to a report by WSBT.
(Below: Watch a rare Interview with Regis and Cardinal Dolan - starts at 0:47)
A university spokesperson told WSBT that Philbin, will have a funeral service at the Basilica of the Sacred Heart and will be buried at Cedar Grove Cemetery on campus. No date has been set.
In an article by Franciscan Media, it was noted that Philbin carried lessons of faith with him through the ups and downs of his career. “It’s been very beneficial,” he tells St. Anthony Messenger. “It makes you stronger and overcome certain losses that occur in your life that everybody goes through one time or another.” Such as? “How about job loss?” Philbin offers.

“That’s happened a couple of times, so you’ve just got to do a little prayer and hope for the best. I think your religion strengthens you in that regard.”

For Philbin, Notre Dame’s influence wasn’t found just on the football field. He says it’s the religious education he’s received, first at Our Lady of Solace Grammar School and Cardinal Hayes High School in New York’s South Bronx, and then at Notre Dame, that has grounded and guided him throughout his life.

“I think it solidified me, disciplined me and taught me an awful lot,” Philbin said while appearing on the TV show The Sunday Mass with New York’s Cardinal Timothy M. Dolan on Christmas Day 2009. “Everything I am right now I attribute to the 16 years I spent in Catholic education. This was great training for the life that followed. I don’t think other schools duplicate that in so many ways.”

Regis Francis Xavier Philbin’s interest in show business sparked as a child. Listening to Bing Crosby croon on the radio every night, the altar server had visions of a singing career.

In New York he was offered a co-hosting spot on Morning Show in 1983. Two years and two co-hosts later, Kathie Lee Gifford joined the show, which was renamed Live With Regis and Kathie Lee after becoming syndicated in 1988.


Philbin was married twice and had four children. He was married to Catherine Faylen, from 1955 to 1968, and they had a daughter, Amy, and a son, Daniel. He married interior decorator Joy Senese in 1970 (till death) and they had two daughters, Joanna and Jennifer. At the time of his death, Philbin resided in Manhattan, He supported  the sports teams of his alma mater, the Notre Dame Fighting Irish.
He remains a strong supporter of (Catholic) Cardinal Hayes High School. In 2007, he designated Hayes as the beneficiary of his $175,000 winnings from his appearance on a game show. He was also host of the popular Who Wants to Be a Millionaire? from 1999 to 2002.

Each year, he also funded scholarships for several Hayes students. “When I go there and see the kids, I’m very proud of them and what they’ve accomplished and the difference that Hayes has made in their lives,” he says. “And frankly, it’s all based on the religion part of it.”

Philbin shared his faith with the media. “There is a wide chasm between the media and religion, especially the Catholic religion I think, but that’s just the way it is,” he says. But “I’ve supported Hayes, Notre Dame and the church on many occasions.”

“That privilege of being educated at Notre Dame goes a long way,” he tells St. Anthony Messenger as he walks toward his cheering fans at the bookstore; “and Lou Holtz, who insists on you trying to be perfect. I’m not. I’m just like everybody else, but that, and the religion, helped me a lot.”

Regis Philbin is the Guinness World Records holder for most hours logged on screen (currently at more than 16,700),