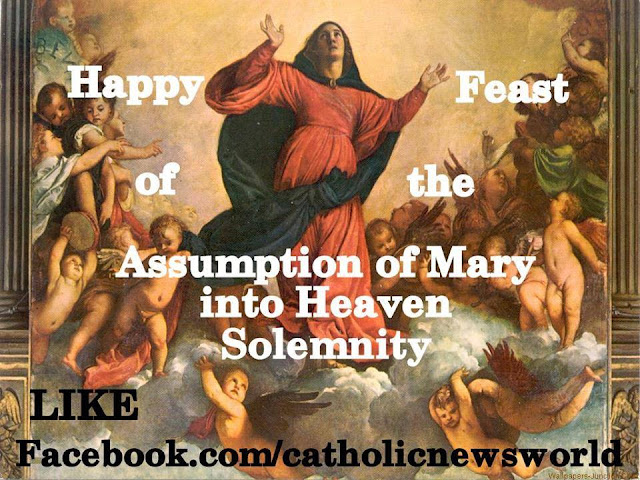 FIRST READING
Revelation 11.19a; 12.1-6a, 10ab
God’s temple in heaven was opened, and the ark of his covenant was seen within his temple.

A great portent appeared in heaven: a woman clothed with the sun, with the moon under her feet, and on her head a crown of twelve stars. She was pregnant and was crying out in birth pangs, in the agony of giving birth.

Then another portent appeared in heaven: a great red dragon, with seven heads and ten horns, and seven diadems on his heads. His tail swept down a third of the stars of heaven and threw them to the earth. Then the dragon stood before the woman who was about to bear a child, so that he might devour her child as soon as it was born.

And she gave birth to a son, a male child, who is to rule all the nations with a rod of iron. But her child was snatched away and taken to God and to his throne; and the woman fled into the wilderness, where she has a place prepared by God, so that there she can be nourished for one thousand two hundred sixty days.

Then I heard a loud voice in heaven, proclaiming, “Now have come the salvation and the power and the kingdom of our God and the authority of his Christ.”

SECOND READING
1 Corinthians 15.20-26
Brothers and sisters: Christ has been raised from the dead, the first fruits of those who have fallen asleep. For since death came through a man, the resurrection of the dead has also come through a man; for as all die in Adam, so all will be made alive in Christ. But each in his own order: Christ the first fruits, then at his coming those who belong to Christ.

Then comes the end, when he hands over the kingdom to God the Father, after he has destroyed every ruler and every authority and power. For he must reign until he has put all his enemies under his feet. The last enemy to be destroyed is death.

PSALM
Psalm 45
R. At your right hand stands the queen in gold of Ophir.

Daughters of kings are among your ladies of honour; at your right hand stands the queen in gold of Ophir. Hear, O daughter, consider and incline your ear; forget your people and your father’s house. R.

The king will desire your beauty. Since he is your lord, bow to him. The princess is decked with golden robes; in many-coloured robes she is led to the king; behind her the virgins, her companions, follow. R.

With joy and gladness they are led along as they enter the palace of the king. R.

GOSPEL
Luke 1.39-56
Mary set out and went with haste to a Judean town in the hill country, where she entered the house of Zechariah and greeted Elizabeth.

When Elizabeth heard Mary’s greeting, the child leaped in her womb. And Elizabeth was filled with the Holy Spirit and exclaimed with a loud cry, “Blessed are you among women, and blessed is the fruit of your womb. And why has this happened to me, that the mother of my Lord comes to me? For as soon as I heard the sound of your greeting, the child in my womb leaped for joy. And blessed is she who believed that there would be a fulfillment of what was spoken to her by the Lord.”

And Mary said, “My soul magnifies the Lord, and my spirit rejoices in God my Saviour, for he has looked with favour on the lowliness of his servant. Surely, from now on all generations will call me blessed; for the Mighty One has done great things for me, and holy is his name. His mercy is for those who fear him from generation to generation. He has shown strength with his arm; he has scattered the proud in the thoughts of their hearts. He has brought down the powerful from their thrones, and lifted up the lowly; he has filled the hungry with good things, and sent the rich away empty. He has helped his servant Israel, in remembrance of his mercy, according to the promise he made to our fathers, to Abraham and to his descendants forever.”

And Mary remained with Elizabeth about three months and then returned to her home.