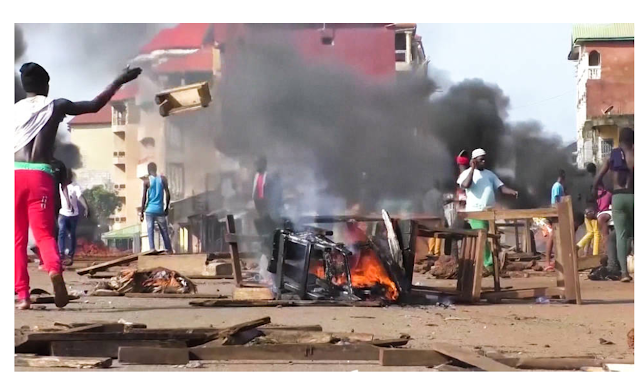 Conakry (Agenzia Fides) - According to official figures, a total of 21 people died in clashes that took place in the Republic of Guinea on October 18, following the announcement of the preliminary results of the presidential election, by the Electoral Commission (CENI), which sees the re-election of t outgoing President, Alpha Condé, with 59, 5% of the vote against 33.5% for the opposition candidate, Cellou Dalein Diallo, The opposition leader, who declared himself the winner, confirmed yesterday, October 26, his intention to appeal to the Constitutional Court against the result of the election, flawed, according to him, by massive fraud. In addition to the capital Conakry, the clashes have spread to the major cities in the country. Shops remain closed for fears of riots and looting. UN envoys, the African Union (AU) and the Community of West African States (ECOWAS) continue their mediation efforts and meeting talks with various Ministers, the Electoral Commission and the diplomatic corps.

Amnesty International has denounced the actions of the Guinean security forces who reportedly fired deadly ammunition at demonstrators during the post-election riots, based on testimony statements and video analysis of the clashes. The NGO for the defense of human rights also condemned the blocking of the Internet and telephone communications during the riots.

Even before the election, Condé's candidacy for a third term was strongly contested by the opposition because it was seen as a violation of the Constitution, which provides for two consecutive terms for the Presidency of the Republic (see Fides, 19/10/2020)

Condé became Guinea's first democratically elected leader in 2010 and was re-elected in 2015. However, human rights groups, accuse him of sliding towards authoritarianism. Guinea is the only French-speaking African country to have refused to join the Franco-African Community proposed by De Gaulle in 1958. The country proclaimed independence under a socialist regime that Ahmed Sékou Touré ruled with an iron fist for a quarter of a century. After his death in 1984, Lansana Conté, a soldier, took power with a coup. He was elected president in 1990, he was elected twice, but these were neither free nor transparent ballots.

But on September 28, 2009, the army violently suppressed a gathering of thousands of opposition supporters who rejected his candidacy in Conakry Stadium in the run-up to the presidential election: According to the United Nations, 157 people were killed and 109 women were raped. After Camara himself was seriously injured, he resigned power and paved the way for the first democratic elections on November 7, 2010, which Alpha Condé won.

Guinea's immense mineral wealth (it is one of the world's leading producers of bauxite and has deposits of iron, gold, diamonds and oil) have often been at the center of heated international legal disputes. (L.M.) (Source: Agenzia Fides, 27/10/2020)