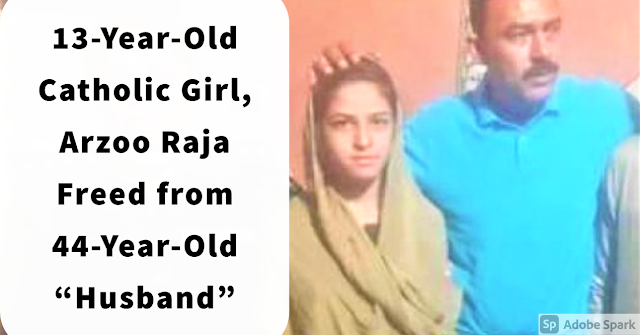 Arzoo Raja, the 13-year-old girl kidnapped, forcefully converted to Islam and married against her will to Ali Azhar, a 44-year-old Muslim, is freed.

Asia News reports that the Sindh High Court has reviewed its judgment and wants to investigate the case. Their rethinking is the result of pressure from public opinion, Christian and Muslim, and the intervention of Bilawal Bhutto-Zardari, president of the Pakistani People's Party. A law against the marriage of minors, approved in the Senate, is at a standstill in parliament because it is "contrary to Sharia law and Islam". Pakistan ranks sixth in the world for the number of child brides.

Changing on a previous ruling delivered on 30 October, the Sindh High Court decided to send Arzoo Raja to a safe haven (Darul Aman, "women's refuge"), separating her from Ali Azhar, and to arrest the latter on charges of kidnapping, perjury and marriage with a minor.

After Arzoo was kidnapped, her parents filed a kidnapping report. But the alleged husband, Ali Azhar defended himself by saying that the girl was 18 years old and that she freely converted to Islam and married him without compulsion.

But the parents presented the girl's birth certificate confirming her age as a minor: 13 years old.

Diego Saleh, vicar general and director of the Karachi Justice and Peace Commission, confirmed that Arzoo is now in a protected place. He thanked all the people, Christians and Muslims, who acted and prayed for her. And he especially thanked the Sindh government and the police for their efforts in recovering the 13-year-old girl. But - he added - "our struggle is not over, it is only at the beginning because there are still hundreds of Arzoos waiting for justice and a freedom".