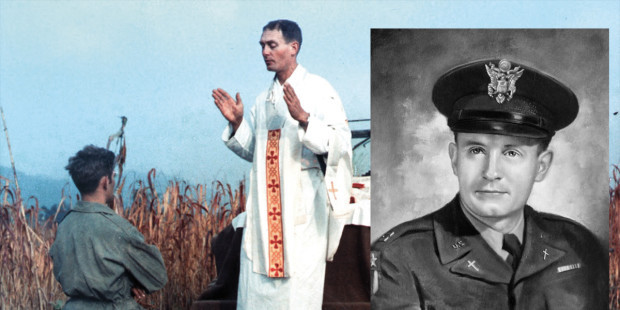 Emil Joseph Kapaun was a Catholic priest and U.S. Army Chaplain born in the small Czech farming community of Pilsen, Kansas, on Holy Thursday, April 20, 1916. Growing up he was much like any other hardworking farm boy, but he was especially mindful of God and others.    At first feeling the call to become a missionary priest, under the direction of his local parish priest he decided to enter the seminary for the Diocese of Wichita and was ordained a priest on June 9, 1940. He became an army chaplain and was captured in N. Korea. Father Kapaun spent himself in heroic service to his fellow prisoners as a POW without regard for race, color or creed, giving them help and hope when they needed it most.
The Pentagon recently released a message saying they identified his remains.
Excerpt from Statement by Pentagon Press Secretary John F. Kirby

Finally, I want to finish by honoring a hero from the Korean War. The Defense POW MIA Accounting Agency formally identified the remains of Army Chaplain Emil Kapaun of Kansas from remains that had rested among unknowns at the National Memorial Cemetery of the Pacific in Hawaii.
His remains had rested among the 867 remains buried there as unknowns at the cemetery. In 2018, the Defense POW MIA Accounting Agency began a seven-phased project to disinter all remaining Korean War unknowns from the cemetery.
And at a White House ceremony on April 11, back in 2013 President Obama posthumously awarded the Chaplain the Medal of Honor for his heroic service during the Korean War. And just to remind, because I think it's important to think about what heroes like he did.
On November 2, 1950, the Third Battalion was near Pusan when the unit came under heavy fire from Chinese forces and received orders to withdraw. Approximately a quarter of the Battalion's soldiers made their way back to friendly lines, but the others -- including many wounded soldiers became trapped.
Chaplain Kapaun volunteered to stay with the wounded and was soon captured and taken to a Chinese-run POW camp on the Yalu River. The Chaplain continued to minister to other POWs, even after he became gravely ill. And he lived long enough to celebrate a final Easter mass in late March, dying on May 23, 1951.
I think it's just terrific that we were able to identify his remains and bring closure to his family, and to honor his service, and the Department thanks him for that service and for the example he set of bravery and courage under fire.
Source: https://www.defense.gov/Newsroom/Transcripts/Transcript/Article/2527735/pentagon-press-secretary-updates-reporters-on-defense-operations/