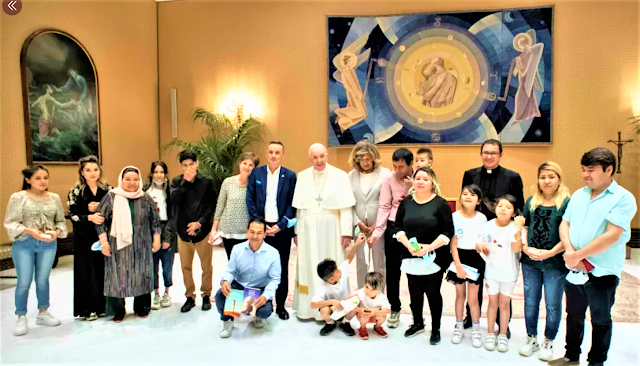 Asia News reports that Pope Francis met with a group of Afghan Christians rescued from Afghanistan. Pary Gul, her children, sons-in-law and grandchildren were airlifted to Italy in August. She told the pontiff about her husband going missing during days of violence. Thanks to the Meet Human Foundation, they are starting a new life in Italy with the “pope's ring”.
The Afghan Christian family who managed to escape from Kabul thanks to an appeal via AsiaNews by writer Ali Ehsani met Pope Francis this morning in the Vatican. Before today’s general audience, in a room adjacent to the Paul VI hall, the pontiff received in a moving meeting Pary Gul. Her husband has been missing since the Taliban seized the Afghan capital where he was probably "denounced" by someone as a Christian. She came with her three daughters and their husbands, her youngest son and grandchildren who were part of a group of 14 people who arrived in Italy in August evacuated with the Italian airlift thanks to the Meet Human Foundation of Bergamo, which was moved to act after reading our article.
Pary Gul arrived at the Vatican with a gift for the pope: a ring she brought with her from Afghanistan. But Francis, who listened with great attention to their story, gave it back. “He told her that this is now 'the pope's ring' but instead of him keeping it, she should have it as a token of friendship and hope for the future,” Nembrini said. The picture of the meeting and the story are front page news in L’Osservatore Romano, the newspaper of the Holy See. The Pope asked about her husband, but unfortunately no news has come from Afghanistan about his fate, which is a source of great concern. In Italy the group is facing other issues, starting with one-year-old Elivas, the youngest son, who is in poor health after contracting a bad infection. Fortunately, he is doing better. Now the group is moving to Bergamo (northern Italy) where they will live in a house made available by Meet Human, allowing them to settle in their new country, through school and work. The foundation has decided to be financially responsible for the family, refusing government support. Their focus will be instead on charity and donations “because charity is charity," Nembrini said, building friendships one day at a time.
Edited from Asia News IT

Unknown said…
No one My house is broken if you can help us that will be great full for us ask for government but still I didn't get any response we are very poor if you can't believe you may call in video call so that you may believe us we are in very critical situation ... Father their hand to Christians ppl to help you please help me father
September 23, 2021 at 9:03 PM