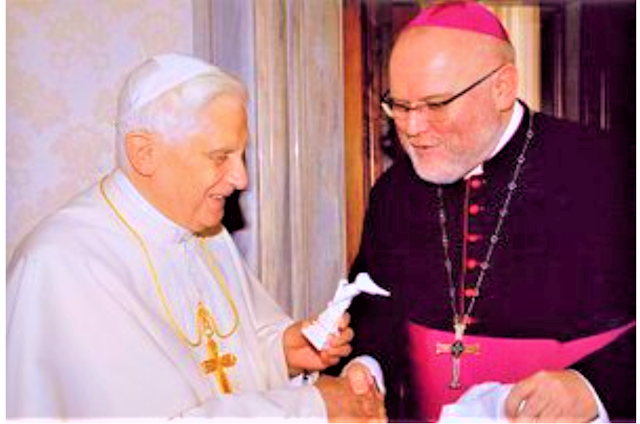 The Munich abuse report was presented on Thursday, January 20, 2022 and it faults Pope Emeritus Benedict XVI then Joseph Cardinal Ratzinger, Cardinal Reinhard Marx, Cardinal Friedrich Wetter and other persons in charge.The lawyers accuse Benedict of misconduct in four cases during his tenure as Archbishop of Munich and Freising (1977-1982). Marx is accused of misconduct in two cases, Wetter in 21 cases. Attorney Martin Pusch also pointed out that the emeritus head of the church had rejected his responsibility in all cases in a personal statement. His statement has been published with his consent with the report.
According to the attorney, two cases concern priests who were criminally sanctioned but both were allowed to continue working as pastors. No action was taken against them under church law, and "nothing recognizable" about care for their victims.
"I am shocked and ashamed," said Marx in a first reaction to the report published on Thursday by the Westpfahl Spilker Wastl (WSW) law firm . His first thought is for those affected who have "experienced misery and suffering to an alarming extent" at the hands of church representatives. In the report, Marx is accused of misconduct in two cases.
Pope Emeritus Benedict XVI is, thus, incriminated in an abuse report published today by the Archdiocese of Munich and Freising. As archbishop, he failed to take action against clerics accused of abuse in four cases, the experts claim. The report also incriminates Cardinals Wetter and Marx and some priests and deacons. In essence, it is about the allegation that some priests and deacons continued to be employed even after allegations of sexual abuse became known. Archbishop Gänswein rejected the allegations a few days ago. The number of victims is about 497 victims, mostly male. Children and young people were reported as victims during the period between 1945 and 2019.
FULL REPORT: https://westpfahl-spilker.de/wp-content/uploads/2022/01/WSW-Gutachten-Erzdioezese-Muenchen-und-Freising-vom-20.-Januar-2022.pdf
Cardinal Marx's Diocese of Munich Statement:
The Archdiocese has no knowledge of the content of the report until it is published. Vicar General Christoph Klingan and Head of Office Stephanie Herrmann will accept the report as clients during the public presentation by the law firm commissioned on Thursday morning, January 20th, on behalf of the archdiocese. It is important to Archbishop Marx, Vicar General Klingan and Head of Office Herrmann to exchange information about the report with the Advisory Council for Affected Persons and the Review Commission in the Archdiocese as soon as possible. Due to the expected scope of the report, which covers the period 1945 to 2019, it will take time to deal with the content in a well-founded manner. After an initial examination, the Archdiocese will comment on the content of the report at a press conference onThursday, January 27, at 11 a.m. in the Catholic Academy in Munich, Mandlstrasse 23 .
Source: https://www.erzbistum-muenchen.de/news/bistum/Statement-von-Kardinal-Marx-zur-Veroeffentlichung-des-Missbrauchsgutachtens-40868.news
Excerpt from Vatican News:

At least 497 people were abused in the Archdiocese of Munich-Freising over a period of almost 74 years (from 1945 to 2019). Most of them were young; 247 are male victims and 182 are female. Sixty percent of the victims were between the ages of 8-14. The report identifies 235 perpetrators of abuse including 173 priests, nine deacons, five pastoral workers, 48 people from the school environment. This is the data presented in the report on clerical abuse in the Church of Munich, compiled by the Westpfahl Spilker Wastl law firm, which was commissioned by the archdiocese in February 2020.

Also on Thursday, Cardinal Seán Patrick O'Malley, President of the Pontifical Commission for the Protection of Minors, issued a comment on the report.

"The Holy See has committed to study the independent report that was commissioned by the Archdiocese of Munich and we await their response," he wrote. "The Church’s commitment to transparency and accountability are fundamental to its promise to all people, most especially those who have been abused."