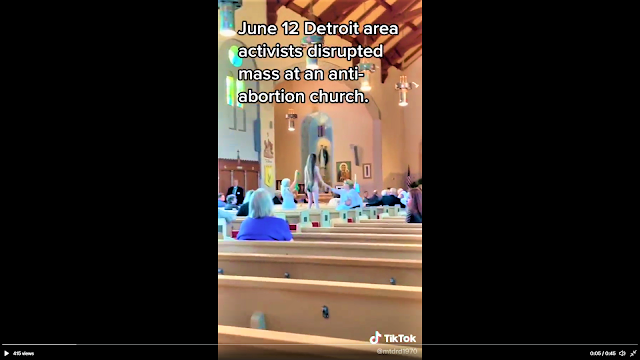 Holy Mass at a Catholic church in Michigan was interrupted by a half naked woman standing on pew (See 1st video below) and shouting pro-abortion chants. According to reports 5 women disrupted the 11:00 am Mass at St. Veronica's in Eastpointe, MI. Fr. Stan was starting his homily when 2 women stood up on the pew and completely removed their clothes and used vulgar language saying, among other things, "Kill al. babies." The women of the parish pushed (See 2nd video below) these individuals out of the church. “Overturn Roe? Hell, no!” the woman shouted. “Abortion without apology!”

Disrupting "business as usual" at a woman hating Catholic church -
Get to DC #SCOTUS#RiseUp4Abortion#Green4Abortion pic.twitter.com/yQTBrV6p7V