VATICAN : POPE : APPOINTMENTS OF BISHOPS AND OTHER NEWS

IN HONOR OF THE YEAR OF FAITH - JCE NEWS WILL BE SHOWING SOME OF THE TOP CATHOLIC MOVIES OF ALL TIME. TUNE IN TOMORROW FOR THE NEXT PART OF THE BELLS OF ST. MARY'S -

ASIA NEWS REPORT
by Amélie de La HougueThe 24-hour vigil will be held worldwide on January 27. Initiative followed by 500 cities more than in 2012. This year's event coincides with the "International Holocaust Remembrance Day".

Jerusalem (AsiaNews) - More than 3 thousand cities will mark the fifth day of intercession for peace in the Holy Land, to be held January 27, 2013. An extra 500 communities have joined since 2012. Worldwide priests, religious and laity ensure a chain of 24 hours of prayer.

In his talk on January 1, World Day of Peace, Msgr. Fuad Twal, Latin Patriarch of Jerusalem, said: "Peace between peoples can be born and grow only if it is first in every person, every family, every religious community, in all people." "I think - said the prelate - that all the means to achieve peace must pass through justice and dialogue, and never through violence. The path is full of pitfalls, but hope guides us and the song of the angels assures us ".

The main promoters of the Day of Prayer for the Holy Land are: the National Association of Italian Papaboys, the Apostolate of the "Youth for Life", the chapels of perpetual adoration throughout Italy and the world, groups of Eucharistic Adoration , the Association for the promotion of the extraordinary prayer of all Churches for Reconciliation, Unity and Peace.
SHARED FROM ASIA NEWS REPORT

Posted by Jesus Caritas Est at 2:53 PM No comments:

Agenzia Fides REPORT - The Cathedral was filled with the faithful for the celebration of the Eucharist in which Cardinal Julio Terrazas, Archbishop of Santa Cruz de la Sierra, ordained Auxiliary Bishop of the Archdiocese, Mgr. René Leigue Cesari, the first indigenous of East Bolivian called to this ministry. In his homily, Cardinal Terrazas called Monsignor René Leigue "son" and "friend", thanked him for accepting this mission despite the doubts and human weakness, and reminded him that the mission of Bishops is to be ministers of unity and witnesses of truth.According to a note of the archdiocese sent to Fides Agency, the solemn rite, celebrated on January 16, was attended by the Archbishop of Santa Cruz, Cardinal Julio Terrazas, also His Exc. Mgr. Sergio Gualberti, Archbishop coadjutor, the auxiliary Bishops, priests, deacons and pastoral workers. Also His Exc. Mgr. Giambattista Diquattro, Apostolic Nuncio, and about fifteen Bishops from all over the country were present.After 50 years of priesthood and 34 of Episcopal ministry, Cardinal Julio Terrazas said he was especially pleased to ordain Bishop of Santa Cruz, a man born, raised and formed in this land, then added: "I thank God that we can have a reliable guide for the people, a word of encouragement in all circumstances, and a friendly presence, a presence that encourages all ... who leads us to announce the ability that our people have to be able to receive God, to love and to say with clarity and courage to all those who ask us, why we believe, celebrate, what we live every day." (CE)
Posted by Jesus Caritas Est at 2:46 PM No comments:

GARISSA, January 18, 2013 (CISA) -At least five people were killed, including a senior police officer, and six seriously wounded when gunmen attacked a restaurant in Garissa on Wednesday (January 16th).
“Four people died on the spot, while six others were rushed to the hospital,” Garissa County Commissioner Mohamed Maalim told AFP. “The attackers stormed the restaurant where patrons were having dinner or chatting and opened fire indiscriminately and then ran away.”
Garissa deputy prison chief Allan Njagi was among the dead.
Police suspect al-Shabaab sympathizers in Garissa of carrying out this and other recent attacks, although the militant group has not claimed responsibility. The group has, however, offered a large bounty for the killing of Kenyan security officers in an attempt to recruit more Kenyan youth.
No arrests have yet been made in relation to the incident, said newly appointed area police Chief Charlton Mureithi.
Two suspected suicide bombers were also killed Thursday morning in nearby Hagadera camp in Dadaab refugee complex when their explosives went off while being handled, he said.
Mureithi said he suspects the explosives were to be planted on roads to target security forces.
Garissa and its environs have been beset by numerous incidents of violence, including grenade attacks and shootings in recent months
SHARED FROM CISA NEWS
Posted by Jesus Caritas Est at 2:45 PM No comments: 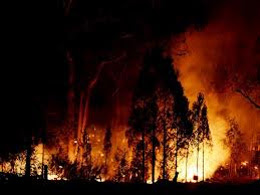 Fires continue to burn out of control in the Warrumbungle National Park
As fires continue to rage out of control in Coonabarabran and north west NSW where 51 homes have been destroyed, the Bishop of Bathurst, the Most Rev Michael McKenna has established a fund to help victims of the worst bushfires to hit the region in more than 40 years.
Earlier this week, Bishop McKenna called on Australians to pray for and offer practical help to victims of fires and yesterday launched the Diocese of Bathurst's Coonabarabran Bushfire Appeal.
Donations can be made by direct deposit to an account set up by the Diocese's Bushfire Appeal Fund or if a tax deductable receipt is required via donations to Centacare Bathurst.
Fires burning in north west NSW have already been declared a catastrophe with 14 of the 83 fires uncontained. More than 200 fire fighters are working around the clock, assisted by 20 aircraft during the day.
Apart from those who have lost their homes, many have been evacuated as the fires rage through and around farmland. Bishop praises courage and comittment of rural fire fighters as they battle blazes near Coonanabarabran
The Centacare Bathurst agency has trained counsellors and workers on the ground in Coonabarabran visiting those who have been evacuated to the local Bowling Club and other facilities in the town. After holding talks with the local Warrumbungle Shire Council, Centacare has offered to assist with the distribution of shopping vouchers to victims as well as urgently needed essentials such as clothing and bedding.
In addition to helping establish and manage the Diocese's Bushfire Appeal Fund, Centacare plans to reinforce its team of trained counsellors next week to help victims with practical as well as emotional support as they come to terms with the loss of their homes and for farmers, the further loss of livestock, sheds, outbuildings and fencing.
Some landowners allowed back to their properties have been faced with the grim task of dealing with hundreds of dead sheep and cattle or having to put down many animals badly burnt as the fires raged across paddocks.

Bishop Michael McKenna announces funding to help victims of fires
Further roles and activities in which Centacare will play a key role will evolve over the next few weeks. Decisions on the best way Centacare Bathurst can provide on-going help will follow further discussions at a local level among other service providers over the coming days.
Counsellors expect to be needed in the region over many months as the initial shock wears off and the reality of devastating loss experienced by so many families hits home.
In the aftermath of Victoria's Black Saturday which destroyed entire towns and left so many homeless, it was found that many bushfire victims were in need of emotional support more than 18 months later.
"In the early days people are so busy trying to organise their lives, the insurance and cope with the disaster that it is often not until much later that the enormity of what they experienced affects them and depression sets in," says a counsellor from Centacare Victoria.
Today with temperatures expected to soar into the 40's Coonabarabran's 3000 residents are on high alert as rural fire fighters continue to battle the 45,000 hectare blaze that continuing to burn out of control across the Warrumbungle National Park. 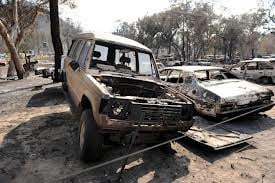 Heat of Coonabarabran fires melted metal, destroying cars, farm vechiles and sheds
Early this morning one of the fires broke containment lines as the blaze entered its fifth day.
Bishop McKenna has nothing but praise for the courage and competence of fire fighters, many of whom are volunteers, as well as the emergency workers operating in the area.
To donate to the Diocese of Bathurst's Bushfire Appeal to help victims of the Coonabarabran fires log on to - http://www.bathurst.catholic.org.au/?i=1191&donate-to-coonabarabran-bushfire-appeal
Alternatively you can send donations direct to Centacare Bathurst, PO Box  1215, Bathurst NSW 2795.

SHARED FROM ARCHDIOCESE OF SYDNEY
Posted by Jesus Caritas Est at 2:43 PM No comments:

Mark 2: 13 - 17
13He went out again beside the sea; and all the crowd gathered about him, and he taught them.14And as he passed on, he saw Levi the son of Alphaeus sitting at the tax office, and he said to him, "Follow me." And he rose and followed him.15And as he sat at table in his house, many tax collectors and sinners were sitting with Jesus and his disciples; for there were many who followed him.16And the scribes of the Pharisees, when they saw that he was eating with sinners and tax collectors, said to his disciples, "Why does he eat with tax collectors and sinners?"17And when Jesus heard it, he said to them, "Those who are well have no need of a physician, but those who are sick; I came not to call the righteous, but sinners."

Posted by Jesus Caritas Est at 2:35 PM No comments:

Posted by Jesus Caritas Est at 12:35 PM No comments: