VATICAN : POPE : JESUS PRAYER BEFORE DEATH AND OTHER NEWS

Agenzia Fides REPORT- On Sunday, February 5, Pedro Manuel died, aged 43, after saving the lives of seven children who had been dragged off into the sea, in front of a beach near the small town of Quinindé, in Ecuador. Pedro Manuel belonged to the Community "Hogar of Nazareth", founded by Maria del Prado Almagro. According to the note sent by the diocese of Cordoba (Spain) to Fides, "Brother Pedro" was a lay consecrated to the Lord, and from 1990 until 1998 he lived in Hogar of Nazareth in Cordoba. This year he was assigned to the mission that the society runs in the village of Quinindé (Ecuador). In this place he helped abandoned children as responsible of the "Holy Family School of Nazareth", a commitment recognized by many.On the Sunday that Latin America will celebrate the Day of Consecrated Life, this event reminds how far the love for God and neighbor can reach. Mgr. Eugenio Arellano Fernandez, M.C.C.I., Apostolic Vicar of Esmeraldas, said that "Brother Pedro died as he lived, given to God and the children". (CE) (Agenzia Fides 08/02/2012)
Posted by Jesus Caritas Est at 12:32 PM No comments:

Agenzia Fides REPORT- "The presidential elections whose first round is fixed for Sunday, February 26, will be decisive for the future of the country", say the Bishops of Senegal in the message dedicated to the presidential elections.In the document, which Fides received, it is stressed that "this first election after the 50th anniversary celebrations of sovereignty, is the bearer of important challenges, giving rise to a particularly acute atmosphere of tension, with unforeseeable risks, if the different protagonists will not be able to reason".The main challenge, according to the Bishops, derives from the "world crisis that spares no nation on the planet" but cannot hide "the internal misrule that has lasted for several decades, marked by public affairs without prospects, partisan, and does not take the needs of the population into consideration".This has not prevented, the bishops point out, the political upheaval of 2000 (which brought to power the current President Wade, after decades of government of the Socialist Party) through "free and transparent election, accepted by everyone". And that is what is hoped for this year's elections. This is why the message appeals to the candidates, so that they give proof of "great democratic culture, desire for truth, the perspective to improve the living conditions of the population, excluding unnecessary diatribes and demagogic promises". Likewise, voters are asked to consider each candidate with a critical eye with its plans and to exercise discernment in the light of the Word of GodThe message ends with the exhortation to prayer, listening and putting into practice the Word of God, entrusting the country to Mary, Our Lady of Poponguine, Queen of Senegal. (L.M.) (Agenzia Fides 08/02/2012)
Posted by Jesus Caritas Est at 12:31 PM No comments: Juan Perez is given financial support by
Catholic Mission of Australia to continue his studies
to become a priest
The generosity of Australians and their donations to the Catholic Mission has made it possible for a young Peruvian to study for the priesthood.
But financial support for this future priest in the Amazonian rainforest jungles of Peru is not the only Australian connection.
For the past 20 years Juan Perez' parish priest in the city of Iquitos, Peru has been Father John Andersen from the Archdiocese of Sydney.
Fr Andersen, who is better known as Padre Juan by the 3000-plus parishioners to whom he ministers as part of Iquitos' parish of Santa Rosa baptised the young man when he was a baby and has known his family and been part of their lives ever since.
"With only 24 priests in the vast Iquitos Vicariate, there is a great need for more good men like Juan," says Fr Andersen.
Currently back in Australia to spend a few weeks visiting his 96-year-old father as well as his brother and sisters and large extended family, Fr Andersen remains a diocesan priest and is in Peru as a missionary priest with the full support and blessing of the Archbishop of Sydney, Cardinal George Pell.
Initially when Fr Andersen was first given permission by Cardinal James Freeman, the then Archbishop of Sydney, to work as an associate priest with the Columban Fathers of Peru, he thought he would return to Australia within six years and resume his work as a diocesan priest. 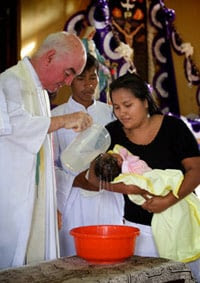 Fr Andersen baptised Juan Perez as
a baby and has known the Peruvian
seminarian throughout his young life
That was 30 years ago and thanks to the encouragement and support of successive Archbishops of Sydney and generosity of members of the Sydney Archdiocese, bringing the message of God's love to the people of Peru, most of whom are poor and lead hard lives, has become his life's work.
"Catholic Mission is helping support the Vicariate of Iquitos through its works with communities, Church leaders and children," says Martin Tuelan, National Director of Catholic Mission. "With input from Fr Andersen, supporters of Catholic Mission are assisting in the growth of faith throughout the region with the training of priests and catechists, and in particular young men such as Juan Perez."
Juan and his fellow seminarians at the Iquitos St Augustine Seminary benefit from the financial support given to them by Australia's Catholic Mission, enabling them to continue with their priestly studies in a region where the average wage for many is just $700 per year.
Fr Andersen recalls baptising Juan when the Perez family brought him to the Church of Santa Rosa, and again later when Juan became one of his altar servers. 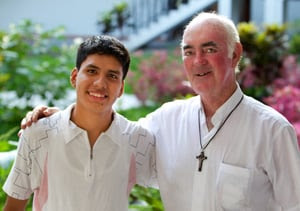 Peruvian seminarian with Sydney diocesan priest,
Father John Andersen
"Each Saturday evening he would be part of a group of young people who would meet at the church to pray and reflect on the reading for Sunday Mass," he remembers, impressed with the teenager's faith, piety and his often profound and insightful reflections on the scriptures.
At 14, Juan told his mentor, friend and family priest Fr Andersen that he was considering a vocation to the priesthood. Then after two years of discernment, he entered St Augustine's Seminary.
"The people who live on the river and its tributaries may see a priest only a few times a year and they need pastoral and spiritual sustenance," says Martin Tuelan and expresses his gratitude to Catholic Mission's supporters which has enabled the Mission to join in this important cause of training priests and bringing God's kingdom on earth to the people of Iquitos.
To donate to Catholic Mission in Australia to support the work of priests worldwide, and in particular the mission in Peru where Sydney Archdiocesan priest, Fr Andersen is mentoring, encouraging and helping a new generation of young men become tomorrow's priests and messengers of God log on to www.catholicmission.org.au
Posted by Jesus Caritas Est at 12:30 PM No comments:

ASIA NEWS REPORT: In the island’s east coast city hundreds of people digging with their bare hands in search of hundreds still buried under rubble. Caritas Philippines warns that food supplies are running low. Landslides and mudslides block roads and make it impossible for the arrival of humanitarian aid. The local Catholic Church opens churches, chapels and schools to provide shelter to hundreds of displaced families.

Manila (AsiaNews) – The death toll from the 6.9 magnitude earthquake that struck the islands of Negros and Cebu (Central Philippines) on 6 February has risen to 48 dead and 92 missing. In the eastern part of the island the quake destroyed dozens of towns and villages. Hundreds of people are buried under the rubble. Alvin Futalan, head of the Guihulngan police (100 thousand inhabitants), explains that there are in the hundreds of collapsed buildings in the towns and people are digging with their bare hands. The National Disaster Risk Reduction Management Council (Ndrrmc) has recorded over 700 aftershocks, that two days after the earthquake are causing landslides, blocking rescue teams and the arrival of humanitarian aid.

Sister Mapet spokesperson for Caritas Philippines (National Secretariat of Social Action, Nassa), told AsiaNews that "to help the earthquake survivors, the parishes of the Diocese of Dumaguete and San Carlos (Negros Island, central Philippines) are using up stocks, that are running out. "

The nun says that the situation is dramatic. The earthquake has made roads impassable, five bridges have collapsed and another five can only carry light vehicles or on people foot. "The parishes - says Sr. Mapet - have opened churches, chapels and schools to accommodate the hundreds of displaced families and organized collections of food, blankets and clothes among the parishioners not affected by the earthquake. We are still waiting for the aid requested from Caritas International and the government. " (Sc)'
http://www.asianews.it/news-en/Death-toll-from-Negros-and-Cebu-earthquake-rises-to-48-dead-and-92-missing-23912.html
Posted by Jesus Caritas Est at 12:28 PM No comments:

EUROPE : MASS IN THANKSGIVING FOR RELIGIOUS

CATHOLIC HERALD REPORT: A solemn Mass for the religious of the Diocese of Westminster is held at Westminster Cathedral

Archbishop Vincent Nichols is pictured with representatives of female religious communities in the Archdiocese of Westminster after the solemn Mass for religious of the diocese (Mazur/catholicnews.org.uk)
A Solemn Mass for the religious of the Diocese of Westminster was held at Westminster Cathedral on Thursday, February 2, the feast of the Presentation of the Lord.
Representatives from most of the 107 female religious communities in the diocese attended.
Archbishop Vincent Nichols was the principal celebrant at the Mass, delivering a homily that praised the brave undertaking of religious life by the Sisters, 24 of whom were celebrating jubilee anniversaries.
The Archbishop of Westminster quoted the Prophet Malachi, saying that the consecrated life teaches us that “the work of the Lord is to purify and refine ourselves, until we are like gold in His eyes”.
He went on to say that it takes great effort to permit the Lord into our lives so completely and acknowledged the dedication of the Sisters to helping those in need.
The archbishop concluded his homily by saying: “We thank God for our vocation and for all who led us to that decision in life and we cheerfully dedicate ourselves anew today.”
http://www.catholicherald.co.uk/catholiclife/2012/02/09/archbishop-thanks-god-for-sisters/
Posted by Jesus Caritas Est at 12:27 PM No comments:

Posted by Jesus Caritas Est at 12:14 PM No comments: