(Vatican Radio) The people of God endure the challenges of daily life with faith and patience. That – Pope Francis said – is what keeps the Church going.

Speaking at morning Mass at Casa Santa Marta on Monday, the Pope commented on the letter of St. James in which he says: “Consider it pure joy whenever you face trials of many kinds”. Patience he explained – has nothing to do with resignation – “when we endure trials with faith they ripen our lives”.

He who wants everything immediately – the Pope said – he who does not know the wisdom of patience and perseverance is like a spoilt child. That kind of person – he added – is a person who does not grow, who is incapable of facing life as it presents itself. And another temptation for those who have no patience – the Pope said – is in the omnipotence of getting what you want immediately, as in the case of the Pharisees who asked Jesus for a sign form heaven: “they wanted God to perform a miracle to show that God approved of him”.

“They confuse God’s way of acting with that of a sorcerer. But God does not behave like a sorcerer, God has his own way of proceeding. And God is patient. Each time we receive the Sacrament of Reconciliation, we sing a hymn to God’s patience. And the Lord carries us on his shoulders with much patience! Christians must live their lives in time with the music of patience, because it is the music of our fathers, of the people of God, of those who believed in his Word, who followed the commandment that the Lord gave to our father Abraham: “walk before me and be blameless”.
And quoting from the Letter to the Hebrews, Pope Francis said “God’s people has suffered and has been persecuted but it has had the joy of looking forward to God’s promises”. This is the kind of patience – he said - that we must have when we are faced with trials and challenges: the patience of a mature person, the patience of God that carries us on His shoulders. This – Pope Francis said – is “the patience of our people”.

And Pope Francis turned his thoughts to the many people he meets when he visits parishes who face problems and suffer. People with a disabled child or challenged by disease, but he said – “who go forward in their lives with patience”.

These are the people of God, in our parishes, in our institutions – so many of them – that keep the Church going with their everyday holiness. Brothers – he said: “consider it pure joy when you face trials, because you know that the testing of your faith produces perseverance. Let perseverance finish its work so that you may be mature and complete, not lacking anything”.

Text from Vatican Radio website
Posted by Jesus Caritas Est at 11:21 AM No comments:

Posted by Jesus Caritas Est at 11:13 AM No comments: 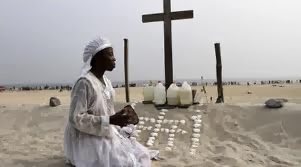 This Sunday, Feb. 16, 2014 dozens of villagers in Northeastern Nigeria, Africa were murdered by terrorists. According to news reports they chanted "Allah is great" as they murdered an estimated 63 people. "As I am talking to you now, all the dead bodies of the victims are still lying in the streets," Nigerian resident Abubakar Usman said to Reuters. "We fled without burying them, fearing the terrorists were still lurking in the bushes." Christians live in the area the where the attack took place. The radical Boko Haram terrorist group has murdered thousands of Christians in recent years. Image share from: http://en.tengrinews.kz/
Posted by Jesus Caritas Est at 11:10 AM No comments:

James, a servant of God and of the Lord Jesus Christ,
to the twelve tribes in the dispersion, greetings.

Consider it all joy, my brothers and sisters,
when you encounter various trials,
for you know that the testing of your faith produces perseverance.
And let perseverance be perfect,
so that you may be perfect and complete, lacking in nothing.
But if any of you lacks wisdom,
he should ask God who gives to all generously and ungrudgingly,
and he will be given it.
But he should ask in faith, not doubting,
for the one who doubts is like a wave of the sea
that is driven and tossed about by the wind.
For that person must not suppose that he will receive anything from the Lord,
since he is a man of two minds, unstable in all his ways.

The brother in lowly circumstances
should take pride in high standing,
and the rich one in his lowliness,
for he will pass away “like the flower of the field.”
For the sun comes up with its scorching heat and dries up the grass,
its flower droops, and the beauty of its appearance vanishes.
So will the rich person fade away in the midst of his pursuits.

The Pharisees came forward and began to argue with Jesus,
seeking from him a sign from heaven to test him.
He sighed from the depth of his spirit and said,
“Why does this generation seek a sign?
Amen, I say to you, no sign will be given to this generation.”
Then he left them, got into the boat again,
and went off to the other shore.
Posted by Jesus Caritas Est at 10:34 AM No comments:

A viral PRO-LIFE video has reached over 1.5 million views. The secret is revealed at the end of the short commercial portraying a true story. It was made in Thailand for a company that sells women's clothing products. This video is heart-breaking and sadly shows what the beginning of life is like for thousands of babies in Thailand and other parts of Asia. Please share this mother's story of true love.... 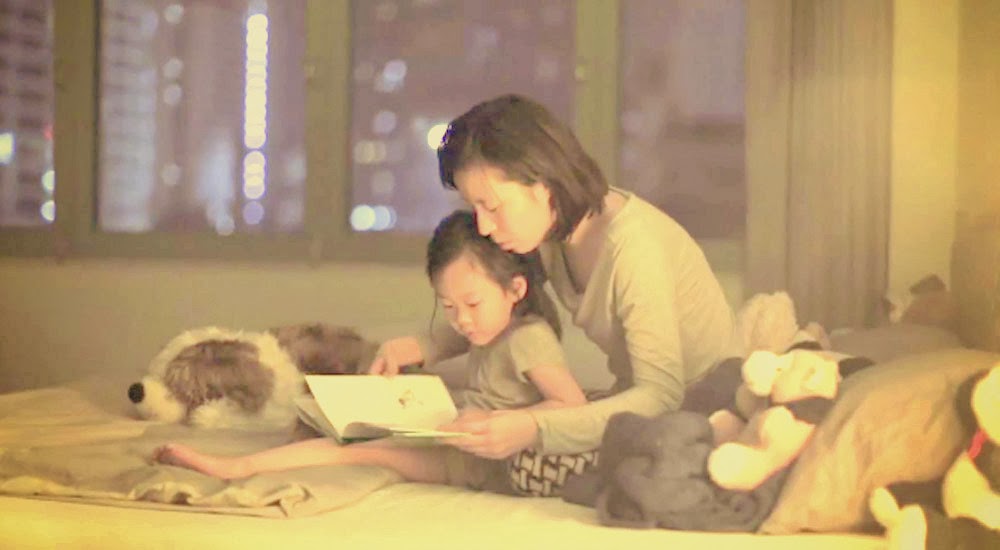 Posted by Jesus Caritas Est at 9:46 AM No comments: 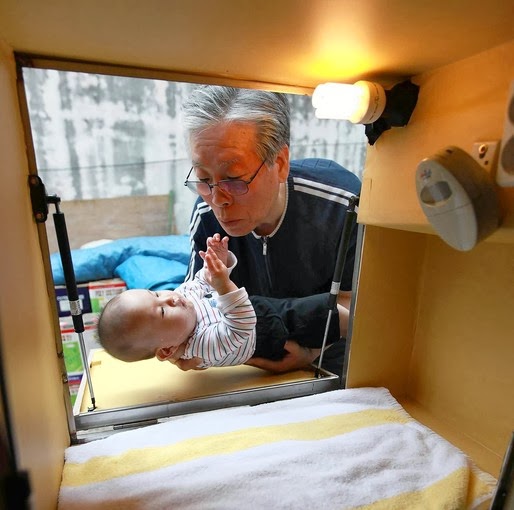 ASIA NEWS REPORT: (Image source: Google) by Wang Zhicheng Every year in China at least 10 thousand infants are abandoned. Because of the one-child policy, many of them are girls, but there are also many babies with disabilities or serious illnesses. 60 million births that are not legally registered. Guangzhou ( AsiaNews) - Chinese authorities have opened 25 new "baby hatches" , where parents can leave their babies and thus save their lives. Over the next few months, the government has ordered that every city have at least two "hatches". According to Xinhua, since the first "hatches" were opened in 2011 there are now about 25.

FOR BREAKING NEWS AND INSPIRATIONAL STORIES AND FREE MOVIES
LIKE US ON FACEBOOK NOW http://www.facebook.com/catholicnewsworld
Within the first 15 days of opening in Guangzhou, 79 babies were abandoned. The parents leave their child in the "hatches", consisting of an incubator and a bell. After placing the newborn, they can ring the bell, which rings with a certain delay, to allow parents time to disappear into anonymity . The majority of children placed in "nests" have disabilities or serious illnesses. In all likelihood, the parents abandon them because they have no money to deal with the medical care. It is estimated that at least 10 thousand children are abandoned each year in China. The new policy of "hatches" is a corrective to the one-child law that sought to prevent unwanted births or higher quotas than those set by the population control offices through severe fines and violence. This has often led to the abandonment of girls. The important fact is that both girls and boys are being placed in the "hatches". And this is exactly why the government decided to widen strictures of the one-child law, allowing couples in which one partner is an only child, to have a second child. Several women interviewed about this so-called relaxation of the law have commented that it is useless. They add that many families are no longer able to support the costs of raising and educating one child in the cities let alone two. The situation is different in the countryside where, in addition to the abandonment of girls, there is another problem: the presence of second and third children, not registered in order to escape the fines imposed by the Office of Population Control. It is estimated that this "anonymous" population could count as many as 60 million unregistered children. SHARED FROM ASIA NEWS IT
Posted by Jesus Caritas Est at 9:21 AM No comments:

LAND OF CHRISTIANS REDUCED IN LEBANON

Ind. Catholic News: After the proclamation of independence in the Lebanon, 8130 square km of land belonged to the Lebanese Christians. Today, however, Lebanese Christians have about 4,000 km of land. These figures were provided by Talal al-Doueihy, head of the Movement 'Lebanese Land-Our Land Movement' and reported by the The Daily Star newspaper. The drastic decrease in landed properties belonging to Christians in the country of the Cedars has various causes. Many Christians are emigrating and when they leave they have no choice but to sell their land to Muslims buyers. In addition, during the years of the government of Rafiq Hariri - Prime Minister from 1992 to 1998 and then from 2000 to 2004, who was killed in a suicide bombing on 14 February 2005 - the law regarding the sale of land which guaranteed the right of first refusal to owners of adjacent lands was canceled. The Hariri government wanted in this way to encourage investments in Lebanon from the Arab Gulf countries. The result is that almost all of the lands sold during those years increased from Christian owners to Muslim owners. Several legislative proposals have been presented in parliament to try to block the erosion of the land ownership of Christians in Lebanon. One presented by MPs Sami Gemayel and Ibrahim Kanaan aims to regulate the ownership of land property in Lebanese territory by foreign buyers. Another prepared by the Parliamentary Joseph Maalouf aims to curb the change of ownership of plots of land above 3,000 square meters, and to limit the room for maneuver of intermediaries in the sale of land. Source: Fides
Posted by Jesus Caritas Est at 8:58 AM No comments: