Saint May 28 : St. Bernard of Montjoux : Patron of #Skiers , #Climbers, and Hitchhikers 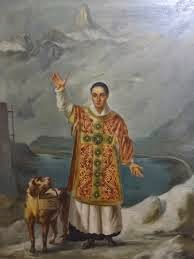 The St. Bernard dogs are named after him. Born in 923, probably in the castle Menthon near Annecy, in Savoy; died at Novara, 1008. He was descended from a rich, noble family and received a thorough education. He refused to enter an honorable marriage proposed by his father and decided to devote himself to the service of the Church. Placing himself under the direction of Peter, Archdeacon of Aosta, under whose guidance he rapidly progressed, Bernard was ordained priest and on account of his learning and virtue was made Archdeacon of Aosta (966), having charge of the government of the diocese under the bishop. Seeing the ignorance and idolatry still prevailing among the people of the Alps, he resolved to devote himself to their conversion. For forty two years he continued to preach the Gospel to these people and carried the light of faith even into many cantons of Lombardy, effecting numerous conversions and working many miracles.
For another reason, however, Bernard's name will forever be famous in history. Since the most ancient times there was a path across the Pennine Alps leading from the valley of Aosta to the Swiss canton of Valais, over what is now the pass of the Great St. Bernard. This pass is covered with perpetual snow from seven to eight feet deep, and drifts sometimes accumulate to the height of forty feet. Though the pass was extremely dangerous, especially in the springtime on account of avalanches, yet it was often used by French and German pilgrims on their way to Rome. For the convenience and protection of travelers
St. Bernard founded a monastery and hospice at the highest point of the pass, 8,000 feet above sea-level, in the year 962. A few years later he established another hospice on the Little St. Bernard, a mountain of the Graian Alps, 7,076 feet above sea-level. Both were placed in charge of Augustinian monks after pontifical approval had been obtained by him during a visit to Rome. These hospices are renowned for the generous hospitality extended to all travelers over the Great and Little St. Bernard, so called in honor of the founder of these charitable institutions. At all seasons of the year, but especially during heavy snow-storms, the heroic monks accompanied by their well-trained dogs, go out in search of victims who may have succumbed to the severity of the weather. They offer food, clothing, and shelter to the unfortunate travelers and take care of the dead. They depend on gifts and collections for sustenance. At present, the order consists of about forty members, the majority of whom live at the hospice while some have charge of neighboring parishes. The last act of St. Bernard's life was the reconciliation of two noblemen whose strife threatened a fatal issue. He was interred in the cloister of St. Lawrence. Venerated as a saint from the twelfth century in many places of Piedmont (Aosta, Novara, Brescia), he was not canonized until 1681, by Innocent XI. His feast is also celebrated on the 15th of June in some Calendars. (From the Catholic Encyclopedia)
Posted by Jesus Caritas Est at 6:14 PM 1 comment: 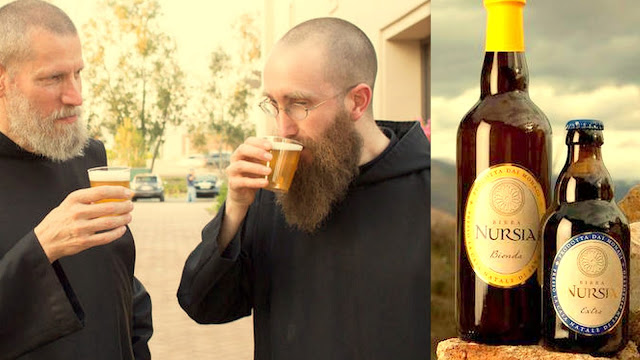 Catholic monks have been brewing beer for over 1,500 years.The Monks of Norcia at the monastery of St. Benedict have a 13th century cloister built over St. Benedict’s birthplace in the Italian city of Norcia, near Rome. The monastery was reopened in Great Jubilee Year of 2000. They follow their founder’s rule of Ora et Labora (Prayer and Work). In 2012 the monks of Norcia began brewing their own line of beer.  12 of the 18 monks who now live in St. Benedict’s monastery come from the United States. Thus they also ship bottles of their beers to North America.  The in the sixth century, Benedict of Norcia, the patron of Europe and founder of Western monasticism, wrote a guide for monastic life called “The Rule of St. Benedict.” This book of seventy-three chapters explain how to run a monastery.  In medieval times beer was safer to drink than water contaminated by sewage. Known as “liquid bread,” beer also helped the monks through periods of fasting. Fr. Benedict Nivakoff, from Connecticut, the director of the brewery, says there is a supernatural” part to their work. “People see that for us it’s not just a job,” he said. “Our job is to do something which, by the standards of the secular world, is pretty useless: to pray.” “There’s a comparison with beer, because in a sense, [beer] is useless, it’s not something that you have to have to survive,” he said. “But it’s something you can enjoy and it makes life better, like God.” It’s designed to fulfill a two-fold goal of self-sufficiency and evangelization, because, Davoren said, beer-making is a great ice-breaker, and conversation often moves from ale to faith. They make more than 13,000 gallons of beer per year which is brewed during days which begin at 4 a.m.. “We’re seeking God above all,” Davoren added. “The focus of our day is God. We work to support ourselves, but also for the glory of God: The beer helps support the monastery, so that the monastery can support his work in the world.”
Edited from the Website of https://birranursia.com/
Posted by Jesus Caritas Est at 12:50 PM No comments: 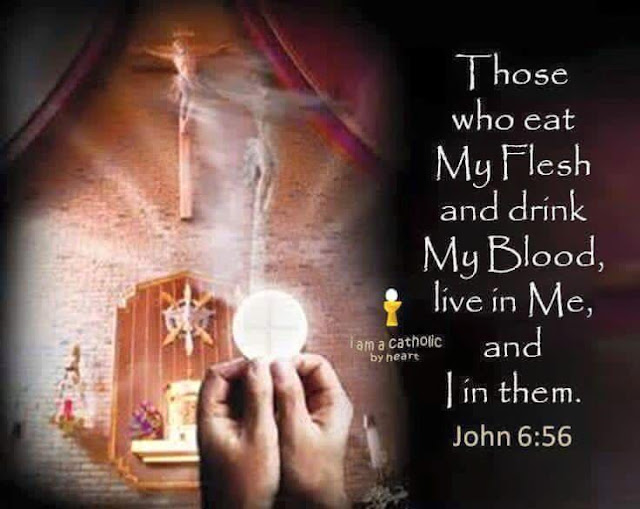 Friday of the Eighth Week in Ordinary Time
Lectionary: 351

Beloved:
The end of all things is at hand.
Therefore be serious and sober-minded
so that you will be able to pray.
Above all, let your love for one another be intense,
because love covers a multitude of sins.
Be hospitable to one another without complaining.
As each one has received a gift, use it to serve one another
as good stewards of God’s varied grace.
Whoever preaches, let it be with the words of God;
whoever serves, let it be with the strength that God supplies,
so that in all things God may be glorified through Jesus Christ,
to whom belong glory and dominion forever and ever. Amen.

Beloved, do not be surprised that a trial by fire is occurring among you,
as if something strange were happening to you.
But rejoice to the extent that you share in the sufferings of Christ,
so that when his glory is revealed
you may also rejoice exultantly.

Jesus entered Jerusalem and went into the temple area.
He looked around at everything and, since it was already late,
went out to Bethany with the Twelve.

The next day as they were leaving Bethany he was hungry.
Seeing from a distance a fig tree in leaf,
he went over to see if he could find anything on it.
When he reached it he found nothing but leaves;
it was not the time for figs.
And he said to it in reply, “May no one ever eat of your fruit again!”
And his disciples heard it.

They came to Jerusalem,
and on entering the temple area
he began to drive out those selling and buying there.
He overturned the tables of the money changers
and the seats of those who were selling doves.
He did not permit anyone to carry anything through the temple area.
Then he taught them saying, “Is it not written:

My house shall be called a house of prayer for all peoples?
But you have made it a den of thieves.”

The chief priests and the scribes came to hear of it
and were seeking a way to put him to death,
yet they feared him
because the whole crowd was astonished at his teaching.
When evening came, they went out of the city.

Early in the morning, as they were walking along,
they saw the fig tree withered to its roots.
Peter remembered and said to him, “Rabbi, look!
The fig tree that you cursed has withered.”
Jesus said to them in reply, “Have faith in God.
Amen, I say to you, whoever says to this mountain,
‘Be lifted up and thrown into the sea,’
and does not doubt in his heart
but believes that what he says will happen,
it shall be done for him.
Therefore I tell you, all that you ask for in prayer,
believe that you will receive it and it shall be yours.
When you stand to pray,
forgive anyone against whom you have a grievance,
so that your heavenly Father may in turn
forgive you your transgressions.”
Posted by Jesus Caritas Est at 9:09 AM No comments:

Pope Francis holds a monstrance containing a Holy Host at the end of the Corpus Domini procession from St. John at the Lateran Basilica to St. Mary Major Basilica to mark the feast of the Body and Blood of Christ, in Rome, Thursday, May 26, 2016 - AP
26/05/2016 21:30

(Vatican Radio) Pope Francis celebrated Mass on the steps of Rome’s cathedral basilica of St. John Lateran Thursday evening, to mark the Solemnity of the Most Holy Body and Blood of Our Lord, Jesus Christ.
In the homily he prepared for the occasion, Pope Francis focused on the Eucharist as the source of Christian strength. “From the outset,” he said, “it is the Eucharist which becomes the centre and pattern of the life of the Church: but we think also of all the saints – famous or anonymous – who have ‘broken’ themselves, their own life, in order to ‘give something to eat’ to their brothers and sisters.” The Holy Father went on to say, “How many mothers, how many fathers, together with the slices of bread they provide each day on the tables of their homes, have broken their hearts to let their children grow, and grow well; how many Christians, as responsible citizens, have broken their own lives to defend the dignity of all, especially the poorest, the marginalized and those discriminated;  where do they find the strength to do this?” he asked. “It is in the Eucharist: in the power of the Risen Lord’s love, who today too breaks bread for us and repeats: ‘Do this in remembrance of me’.”
Click below to hear our report

The liturgy was followed by a torchlight Eucharistic procession from the Lateran Basilica to the nearby Basilica of St. Mary Major: an occasion for parish groups, sodalities and charitable and fraternal organisations of all kinds to give public witness to the central mystery of the faith: that Jesus Christ is really, truly, substantially present: body, blood, soul and divinity, under the species of bread and wine.
Ordinary citizens participated too, whether watching from the windows and balconies of the buildings that line the route from the Lateran basilica along the via Merulana to the Basilica of St Mary Major, or joining on foot in the procession itself.
All told, the Mass and procession rad roughly two and a half hours, and ended as the fullness of night fell on the city in late spring, with the Pope leading the faithful in Eucharistic adoration and offering solemn benediction.
Posted by Jesus Caritas Est at 8:32 AM No comments: