POPE FRANCIS "WE NEED THE OXYGEN OF THE GOSPEL, THE BREATH OF THE SPIRIT..."

Posted by Jesus Caritas Est at 10:27 AM No comments:

522 SPANISH MARTYRS OF 1930s ARE BEATIFIED BY HOLY FATHER

(Vatican Radio) Pope Francis sent a video message on Sunday marking the beatification of 522 Spanish martyrs who were killed during the anti-Christian persecutions of the 1930s. Please find below the full text of the video message in English translation.Dear brothers and sisters, greetings.I would like to express my heartfelt participation in the celebration which is taking place in Tarragona, in the course of which a large number of Pastors, consecrated people and lay members of the faith are being proclaimed Blessed Martyrs. Who are the martyrs? They are Christians who have been “earned” by Christ, disciples who have learnt well the sense of that “love to the extreme limit” which led Jesus to the Cross. There is no such thing as love in installments, no such thing as portions of love. Total love: and when we love, we love till the end. On the Cross, Jesus felt the weight of death, the weight of sin, but he gave himself over to the Father entirely, and he forgave. He barely spoke, but he gave the gift of life. Christ “beats” us in love; the martyrs imitated him in love until the very end.The Sainted Fathers say: “Let’s imitate the martyrs!” We must always die a little in order to come out of ourselves, of our selfishness, of our well-being, of our laziness, of our sadnesses, and open up to God, to others, especially those who need it most. We implore the intercession of the martyrs, that we may be concrete Christians, Christians in deeds and not just in words, that we may not be mediocre Christians, Christians painted in a superficial coating of Christianity without substance – they weren’t painted, they were Christians until the end. We ask them for help in keeping our faith firm, that even throughout our difficulties we may nourish hope and foster brotherhood and solidarity.And I ask you to pray for me. May Jesus bless you and the Sainted Virgin protect you.SHARED FROM RADIO VATICANA
Posted by Jesus Caritas Est at 10:22 AM No comments:

While still more people gathered in the crowd, Jesus said to them,
“This generation is an evil generation;
it seeks a sign, but no sign will be given it,
except the sign of Jonah.
Just as Jonah became a sign to the Ninevites,
so will the Son of Man be to this generation.
At the judgment
the queen of the south will rise with the men of this generation
and she will condemn them,
because she came from the ends of the earth
to hear the wisdom of Solomon,
and there is something greater than Solomon here.
At the judgment the men of Nineveh will arise with this generation
and condemn it,
because at the preaching of Jonah they repented,
and there is something greater than Jonah here.”
Posted by Jesus Caritas Est at 10:19 AM No comments: 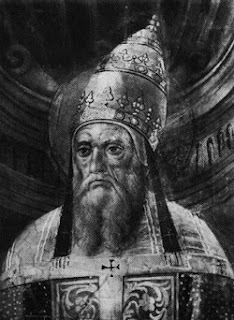 http://www.ewtn.com/saintsHoly/saints/C/stcallistusi.asp
Posted by Jesus Caritas Est at 10:16 AM No comments: 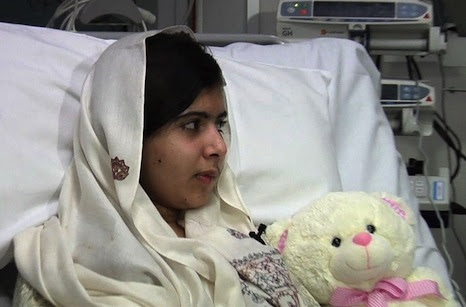 File photo shows Malala Yousafzai recovering after her shooting (picture: AFP/HO/University Hospitals Birmingham)
I started thinking about that, and I used to think that the Talib would come, and he would just kill me. But then I said, 'If he comes, what would you do Malala?' then I would reply to myself, 'Malala, just take a shoe and hit him.'  But then I said, 'If you hit a Talib with your shoe, then there would be no difference between you and the Talib. You must not treat others with cruelty and that much harshly, you must fight others but through peace and through dialogue and through education.' Then I said I will tell him how important education is and that 'I even want education for your children as well.' And I will tell him, 'That's what I want to tell you, now do what you want.'

Doctors had to place a titanium plate over the hole in her skull and her hearing has been badly affected.


She has already been named as one of Time magazine's most influential people in 2013 and has reportedly secured a $3 million contract for a book on her life story.
"This frail young girl who was seriously injured has become such a powerful symbol not just for the girls' right to education, but for the demand that we do something about it immediately," said former British prime minister Gordon Brown, UN envoy on education who organized World Malala Day.
"From the day that terrible shooting -- assassination attempt -- took place, Malala Yousafzai is a symbol for the rights of girls, and indeed the rights of all young people, to an education," said UN spokesman Martin Nesirky.
The Taliban made it clear that the aim of the shooting was to let the world know that girls have no right to equality at school.
Now, more girls than ever before are attending schools in the Swat Valley.
But the United Nations estimates that 57 million children of primary school age do not get an education -- half of them in countries at conflict like Syria.
"Students and teachers across our globe are intimidated and harassed, injured, raped, and even killed. Schools are burned, bombed, and destroyed," said Diya Nijhowne, director of the Global Coalition to Protect Education from Attack.
Gunmen from the Boko Haram Islamist group -- whose name literally means "Western education is a sin" -- broke into a secondary boarding school and killed 41 students and one teacher before setting fire to the building.
According to Ban's annual report on children and conflict, 115 schools were attacked last year in Mali, 321 in the occupied Palestinian territory, 167 in Afghanistan and 165 in Yemen.
Schools were also a regular target in Pakistan when Malala started a diary at the age of 11, written under the pseudonym of Gul Makai, the name of a Pashtun heroine, that was published on BBC Urdu.
The young girl built up a worldwide following of supporters as she told of the anxiety she and friends felt as they saw students dropping out for fear of being targeted by militants. Girls also refused to wear uniforms to school in case militants saw them.
Malala and her family briefly left Swat during a government offensive on the Taliban controlled territory.
On their return, they were the subject of threats by militants before the attack on October 9 last year.
The family now live in Birmingham, England where the girl has undergone surgery and rehabilitation. The Taliban said it shot Malala because of her efforts to promote "secular education" and have made it clear she remains a target. AFP
Edited FROM UCAN/ UN/Interview with Jon Stewart
Posted by Jesus Caritas Est at 10:15 AM No comments:

MARCH FOR THE BABIES ATTACKED BY PROTESTERS IN AUSTRALIA

For release: Sunday 13th October 2013
The Australian Christian Lobby has expressed concern at the anger and vitriol directed at pro-life supporters during yesterday’s annual March for the Babies in Melbourne.
More than 3,000 people participating in the peaceful march were confronted by around 50 radicals who yelled and screamed abuse. The shocking abuse of pro-life supporters was captured by Channel 7 and Channel 9.
According to media reports, several of those hurling abuse were members of the Socialist Alliance and one was filmed wearing a T-Shirt advertising the Australian Sex Party.
ACL’s Victorian Director Dan Flynn, who is also Deputy Chair of March for the Babies, said today that such abuse was unacceptable in a society which respects freedom of speech.
“Every group has the right to lawful assembly and free speech, but no group has a right to violently attack such a lawful assembly with abuse and violence.
“I can only surmise that the motive of these 50 people is to manufacture a violent scene to dissuade people from attending the March for the Babies in the future.”
Mr Flynn said he respected the view of the pro-abortion protestors but said the cause of protecting unborn babies and reforming Victoria’s abortion laws should be allowed to be debated in a civil manner.
March for the Babies occurs each year to peacefully campaign for human rights protections for the unborn, which were completely removed by the passing of a 2008 abortion bill in the Victorian Parliament.
SHARED FROM ACL
Posted by Jesus Caritas Est at 9:58 AM No comments:

117 PILGRIMS KILLED DURING STAMPEDE AT HINDU FESTIVAL IN INDIA The tragedy occurred after people reportedly panicked on their way to the famous Ratangarh Mata temple on the ninth day of the Durga festival as rumors spread that the bridge over the Sindh River in Madhaya Pradesh was about to collapse. About a quarter of a million people were reported to have gathered around the temple.
The death toll was expected to rise further as people were still missing on Monday, officials said, while some families were understood to have taken bodies away to avoid red tape.
Authorities said that search and rescue operations had ended as families continued to look for missing loved ones around the site of the tragedy.
Mangal Kishore, who lost his two-year-old son and whose wife was hospitalized, blamed the local government for failing to take suitable measures to manage the large crowds.
"She [my wife] went to seek blessing for our son, and we lost him," he said.
Chief Secretary Anthony De Sa, the state's highest ranking civil servant, said that there would be an investigation into the stampede, a common occurrence at religious festivals in India where authorities have routinely faced accusations of failing to properly manage large crowds.
The Sindh River bridge was only recently rebuilt after water was released from a nearby dam without warning, killing 49 people during the same festival in 2006.
SHARED FROM UCAN NEWS
Posted by Jesus Caritas Est at 9:43 AM No comments: