LOVE IN ACTION - 100 YEARS OF OUR LADY'S NURSES 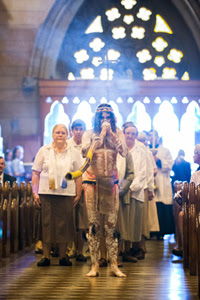 Glen Matthews Tribal Musician Leading in Oln's Mass
It may be the smallest order in Australia - Our Lady's Nurses for the Poor - but the 13 sisters and their practical and compassionate work among the sick and poor, was recognised and celebrated at a special Centenary Mass at St Mary's Cathedral last weekend.
Nearly one thousand people from around the country gathered to remember Eileen O'Connor, the c o-founder of Our Lady's Nurses for the Poor, also known as the Brown Nurses.
Auxiliary Bishop of Sydney and Principal Celebrant, Bishop Terry Brady, echoed the thoughts of many at the mass when he referred to Eileen O-Connor as a "saint-in-waiting".
While still a very young woman Eileen, along with Missionaries of the Sacred Heart priest Fr Edward McGrath, co-founded  Our Lady's of the Poor in Sydney in 1913.
With just a handful of supporters they quietly provided in-home healthcare, advocacy and friendship for the poor, sick and marginalised.
And not without their own battles.
Eileen, affectionately known as "Little Mother", suffered a lifetime of pain and suffering following a fall when very young and resulting in a broken spine. Numerous operations and complications through tuberculosis meant she never grew more than 115 centimetres and in her last years she suffered paralysis and would lapse into unconsciousness for days at a time. Like her supporter and co-founder Fr McGrath her battles were not only physical ones. Both battled with Church authorities with massive obstacles placed in their way however they inspired a small congregation of nuns to dedicate their lives  to visiting the sick and the very poor in their homes when others would not cross the doorstep. These women administered health care and helped with household work and also took care of children in the home. Eileen O'Connor, co-founder of Our Lady's Nurses for the Poor
Eileen died in 1921 aged just 28.
Those days of battling with church authorities are long gone and Eileen's work was honoured by many senior church leaders at the Centenary Mass.
Apart from Bishop Brady there were five bishops from the Archdioceses of Sydney, Brisbane and Canberra-Goulburn and the Dioceses of Maitland Newcastle, Broken Bay and Wollongong as well as 42 priests. The Apostolic Nuncio to Australia, Archbishop Paul Gallagher also attended along with political and community leaders, other religious orders and organisations.
For many the mass provoked memories when they were youngsters of the Brown Nurses going about their work. For all it was a very moving celebration beginning with Indigenous musician Glen Doyle leading the 13 remaining Sisters into the Cathedral.
"As a little boy, I can recall the Brown Nurses getting on and off the 399 bus from Circular Quay to Maroubra Beach at Dudley Street, Coogee," Bishop Brady recalled during his homily.
"I remember being told the story of co-founders, Eileen O'Connor and Fr Ted McGrath MSC, by my mother.
"In the mid-1970s my path with the Sisters crossed again when I was working with the then South Sydney Council as a welfare worker.

Bishop Terry Brady - Homily
"Many of the poorest people of the inner city were being cared for by the Sisters, especially those whom were in the 'too hard' basket for others.
"Over the centuries the Lord has tended to tap on the shoulder young women like Eileen to carry out his most challenging missions," he said.
"He certainly knew what he was about when he offered his invitation to Eileen.
"She may have been crippled and had a number of other ailments but her heart was on fire for the love of the Lord and her brothers and sisters, especially the poorest of the poor.
"In many ways, Our Lady's Nurses for the Poor was a forerunner of a much larger congregation in our church, the Missionaries of Charity.
"I often wonder if the Blessed Teresa of Calcutta had not heard of these Australian based Sisters."
Bishop Brady said Eileen's status as a 'saint in waiting' was not without foundation.
"To many of us, she is already an uncanonised Saint," he said. 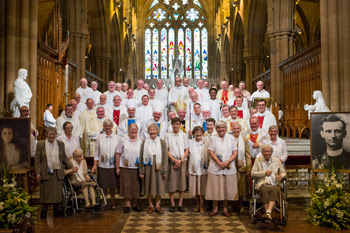 Historic Oln Centenary Mass
"Many of us have a desire to see Eileen O'Connor officially to be beatified and ultimately to be declared a Saint of our Church.
"Work already has been completed, however more is to be done and it is really up to a number of us here today to work much more deliberately to make it happen.
"I dream for the day when the words declaring Eileen O'Connor a Saint of the Universal Church will fill St Peter's Square."
His Excellency, Apostolic Nuncio to Australia, Archbishop Paul Gallagher, said it was an honour to address the congregation as the recently-appointed representative of His Holiness, Pope Francis, exactly one month after his election as the Successor of St Peter and Bishop of Rome.
"As has been noted from the first moment that his name was announced from the balcony of St Peter's, Jorge Bergoglio, Jesuit priest, bishop, cardinal and now Pope, has always been, and will remain, a friend of the poor," he said. Our Lady's Nurses for the Poor was established as a ministry of compassionate service for the sick poor in their own homes.
"So, he would be delighted to know that I am with you this morning to celebrate the centenary of the Brown Nurses."
The Sisters may be small in number but they keep alive the faithfulness and vision of their co-founders.
The Sister's mission for the poor and disadvantaged in the local government areas of Sydney, Randwick and Leichardt is conducted by the Brown Nurses. Based in Glebe this small team of registered nurses continue to minister to the sick poor in the tradition of Eileen O'Connor.
"The cause of a person's poverty is not yours to question. The fact a person is poor is the reason you help." - Eileen O'Connor
SHARED FROM ARCHDIOCESE OF SYDNEY Eileen O'Connor faced many physical hurdles in her short life 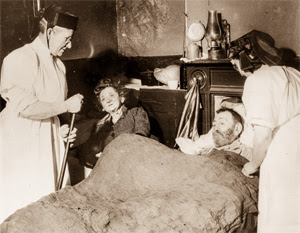 When many of the city's sick and marginalised were left by themselves, the "Brown Nurses" were thee to assist.

Posted by Jesus Caritas Est at 9:52 PM No comments:

RIP LITTLE BOY'S MESSAGE OF PEACE WHO DIED IN BOSTON


Martin's hopes for a better world are tragically poignant Martin's message, penned at school
Today that little child is 8-year-old Martin Richard, killed in the bombing at the Boston Marathon. Afriend of his teacher apparently posted a picture Martin had made that is leading the nation, teaching of peace.
Martin’s life was cruelly cut short, and his mother and sister, who survived, are gravely injured. Our hearts go out to this family that has sustained so much loss.
Martin’s words--“No more hurting people. Peace”--have moved a nation to consider peace, to know peace, to build peace, to live toward peace in the face of unspeakable, calculated cruelty.
“You shall not hurt or harm on all my holy mountain,” Isaiah continues (11:9).
It is breathtaking and heartbreaking that the wisdom of the ages comes through the words of this child, teaching a nation.
This time, we don’t yet know who designed and orchestrated this act of terror. There is a collective national breath-holding, as we are poised to find someone, blame someone, punish someone, maybe just anyone, so we can relieve the tension and vent.
Martin’s here, teaching peace. Peace means not hurting people. Peace means not wanting a scapegoat, a political club with which to beat the other side, and a way to vent our very justifiable rage.
If you honor this little, very brief and wonderfully important life, take a moment and let his words teach you.
Of course, we need to find who did this, and we must prosecute them to the fullest extent of the law.
But this time, let us listen to Martin and not give in to the impulse to seek revenge.
Peace is not hurting people.
SHARED FROM UCAN NEWS
Posted by Jesus Caritas Est at 9:47 PM No comments:

ASIA NEWS REPORT
As cars drove by, the woman's husband asked for help but to no avail. The motorbike the man and his family (wife, daughter and son) were riding was hit from behind by a lorry that fled the scene of the accident. Although father and son survived, rescuers say that had help arrived in time, mother and daughter could have been saved as well. The Indian public is dismayed for the lack of civility and humanity in Indian society.

Jaipur (AsiaNews/Agencies) - Motorists and passers-by ignored a man for more than 40 minutes as his wife and their little eight-month girl bled to death in the middle of a road. The accident occurred yesterday in a tunnel in the city of Jaipur (250 km southwest of New Delhi). Avideo recorded by a CCTV camera shows the distraught man's calls for help fall on deaf ears as a stream of vehicles drove by without stopping for help. The man and his son, who was also riding on the motorbike, suffered only light injuries.
Kanhaiya Lal was riding his motorbike with his wife Guddi, 24; son Tanish, 4; and eight-month daughter Arushi, in an unlawful albeit traditional travelling arrangement. A lorry traveling at high speed hit them from behind, throwing everybody off the bike. The vehicle's driver did not stop but sped on as if nothing had happened.
The woman and the toddler lost immediately consciousness from heavy blood loss. Holding his injured son, who was alert, Lal called for help and led him away from the centre of the road.
Only 40 minutes after a man reached Kanhaiya and called police and an ambulance. For the woman and the girl it was too late; they were pronounced dead before they arrived at the hospital.
The doctor in charge of the SMS emergency unit, D. S. Meena, said that "The situation might have been better if they were provided medical help in time".
Indians were dismayed by the accident, which highlights the lack of civility and humanity in today's society. For men, the question is what is to be done to change things.
"That kind of failure is very, very common on the roads," said Mridul Bhasin, a campaigner with an advocacy road safety group, who was quoted in The Hindu. "This is happening day in, day out every minute in our country. People die and we turn a blind eye."
A similar accident occurred in October 2011 in Guangdong, China, when Yueyue, a two-year-old girl, was hit by two lorries and left to die on the road.
SHARED FROM ASIA NEWS IT

Posted by Jesus Caritas Est at 9:46 PM No comments:

Posted by Jesus Caritas Est at 9:44 PM No comments: 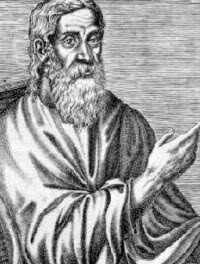