Official Prayer to St. John XXIII Dear Pope John, Your simplicity and meekness carried the scent of God and sparked in people’s hearts the desire for goodness. You spoke often of the beauty of the family gathered around the table to share bread and faith: pray for us that once again true families would live in our homes. With outstretched hands you sowed hope, and you taught us to listen for God’s footsteps as he prepares a new humanity: help us have a healthy optimism of defeating evil with good. You loved the world with its light and darkness, and you believed that peace is possible: help us be instruments of peace at home and in our communities. With paternal gentleness you gave all children a caress: you moved the world and reminded us that hands have been given to us not for striking, but for embracing and drying tears. Pray for us so that we do not limit ourselves to cursing the darkness but that we bring the light, bringing Jesus everywhere and always praying to Mary. Amen.
Posted by Jesus Caritas Est at 10:38 PM No comments:

Catholic #Quote to SHARE by #MotherTeresa "If we have no peace, it is because we have forgotten that we belong to each other." 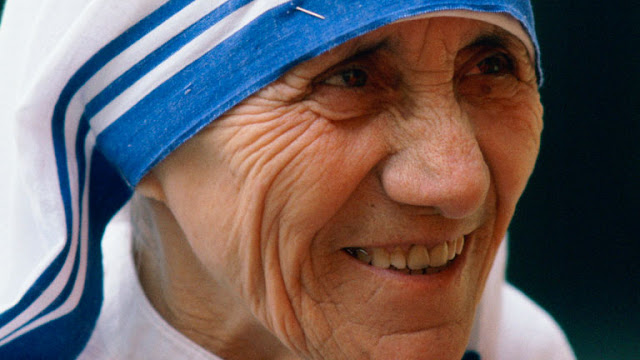 "If we have no peace, it is because we have forgotten that we belong to each other." Mother Teresa
Posted by Jesus Caritas Est at 8:41 PM No comments: 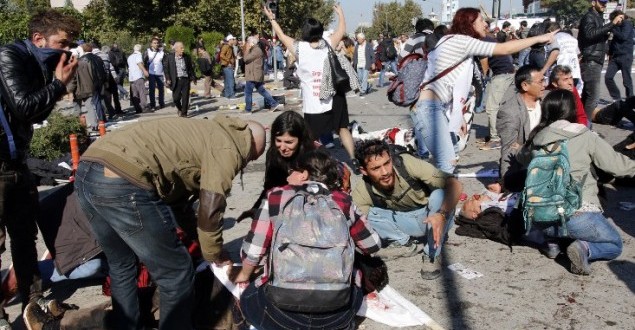 At least 95 people were killed in Ankara the capital of Turkey. This happened when 2 bombs exploded during a peace ralley. Turkey’s Health Minister,Mehmet Muezinoglu, has indicated that over 186 others were wounded. The explosions were seconds apart outside the main train station. The demonstration was calling for increased democracy and an end violence between Kurdish rebels and Turkish forces. Authorities indicated the attacks were suicide bombings.  Turkey recently agreed to take a more active role in the U.S.-led battle against the IS. The attacks came when Turkey nears elections; with a general election on Nov. 1. Prime Minister Ahmet Davutoglu held an emergency security meeting due to the attack.
Posted by Jesus Caritas Est at 8:20 PM No comments:

by Joshua LapideBetween yesterday and today, seven Palestinians are killed, including a 15-year-old boy, in attacks in Jerusalem, Hebron, and Kiryat Arba. A 17-year-old Israeli attacks and kills three Palestinians and a Bedouin, describing them as terrorists. Palestinians and the army clash at the Gaza border, as well as in Jerusalem, the West Bank and the Galilee. Political leaders seem powerless.
Jerusalem (AsiaNews) – The violence is escalating between Israelis and Palestinians, spreading from Jerusalem and the West Bank to Gaza. In a sermon at a mosque in Gaza City, Hamas' Gaza chief Ismail Haniyeh said, "we are calling for the strengthening and increasing of the intifada."
A Palestinian, 22-year-old Ahmed Qali, who was seriously wounded during clashes with Israeli border police in East Jerusalem, died of wounds he sustained during clashes in Shuafat refugee camp.
Two Israelis in their 60s were wounded in stabbing attacks in Jerusalem. Their attacker was killed.
Seven Palestinians were killed and over 60 were wounded during clashes with Israeli forces near the Gaza border fence at Khan Younes Friday afternoon.
Among those killed was a 15-year-old Palestinian boy, Mohammed al-Raqab. Yesterday, another Palestinian was killed and 400 injured in clashes in East Jerusalem and the West Bank.
Two Israelis were lightly wounded in two attacks in Jerusalem and near the settlement of Kiryat Arba in the West Bank.
Friday's stabbings included one by a 17-year-old Jew in the southern Israeli city of Dimona who lightly or moderately wounded three Palestinians and a Bedouin, calling them “terrorists”.
A police officer was attacked in Hebron whilst a Jewish 16-year-old was stabbed in Jerusalem. An Arab Israeli woman was shot and killed when she tried to stab a security guard at a bus station in the northern Israeli town of Afula.
Clashes occurred also yesterday in Nazareth, Kfar Kanna, Sakhnin, and Arraba, all Arab towns in the Galilee.
A rocket fired from the Gaza Strip exploded in an open field in Israel not far from the border. No damage or injuries reported.
Violence between Israelis and Palestinians escalated after clashes erupted on the Temple Mount and in the Old City of Jerusalem, following visits by Jewish settlers and ultranationalists who want to pray at the site reserved for Muslims.
As violence spreads among Jews and Muslims, Israelis and Palestinians, political leaders on both sides seem powerless.
Benjamin Netanyahu, who continues to support the illegal Israeli settlements in the occupied territories and branded recent stabbings as terrorism, said he "strongly condemned the harming of innocent Arabs" and vowed to bring to justice anyone who breaks the law.
Saeb Erakat, who is close to Palestinian President Mahmoud Abbas, accused Netanyahu and his government of "committing a new massacre of Palestinians" in Gaza.
According to Israeli observers, although violence is increasing at present, it is still not comparable to the intifadas of 1987 and 2000.

The two conflicts cost the lives of some 5,000 Palestinians and around 1,100 Israelis.
Shared from AsiaNews IT
Posted by Jesus Caritas Est at 7:46 PM No comments: 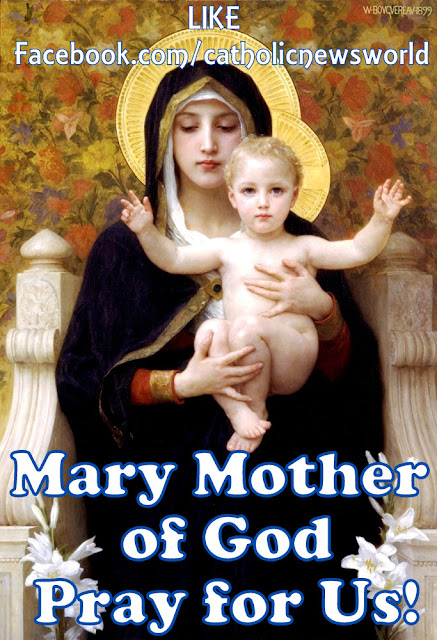 Saturday of the Twenty-seventh Week in Ordinary Time
Lectionary: 466

Thus says the LORD:
Let the nations bestir themselves and come up
to the Valley of Jehoshaphat;
For there will I sit in judgment
upon all the neighboring nations.

Apply the sickle,
for the harvest is ripe;
Come and tread,
for the wine press is full;
The vats overflow,
for great is their malice.
Crowd upon crowd
in the valley of decision;
For near is the day of the LORD
in the valley of decision.
Sun and moon are darkened,
and the stars withhold their brightness.
The LORD roars from Zion,
and from Jerusalem raises his voice;
The heavens and the earth quake,
but the LORD is a refuge to his people,
a stronghold to the children of Israel.

Then shall you know that I, the LORD, am your God,
dwelling on Zion, my holy mountain;
Jerusalem shall be holy,
and strangers shall pass through her no more.
And then, on that day,
the mountains shall drip new wine,
and the hills shall flow with milk;
And the channels of Judah
shall flow with water:
A fountain shall issue from the house of the LORD,
to water the Valley of Shittim.
Egypt shall be a waste,
and Edom a desert waste,
Because of violence done to the people of Judah,
because they shed innocent blood in their land.
But Judah shall abide forever,
and Jerusalem for all generations.
I will avenge their blood,
and not leave it unpunished.
The LORD dwells in Zion.

While Jesus was speaking,
a woman from the crowd called out and said to him,
“Blessed is the womb that carried you
and the breasts at which you nursed.”
He replied, “Rather, blessed are those
who hear the word of God and observe it.”
Posted by Jesus Caritas Est at 2:39 PM No comments: 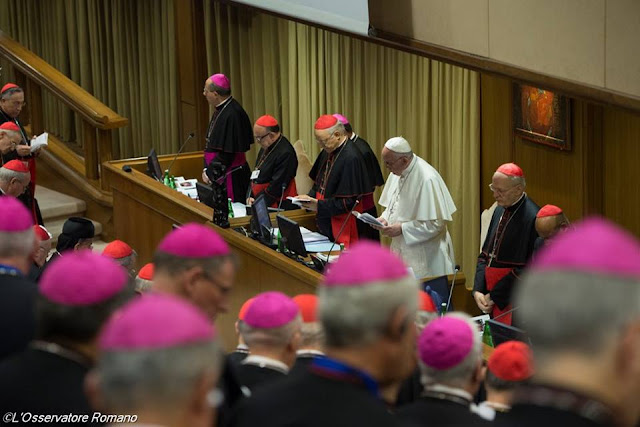 (Vatican Radio) At the end of the first week of the Ordinary Assembly of the Synod of Bishops on the Family in Vatican City, Fr. Thomas Rosica CSB, English Media Attaché for the Holy See, joined Fr. Federico Lombardi SJ to summarise the discussions at the daily press briefing.
A number of issues were spoken about and addressed in interventions from Synod Fathers at the Synod on the Family on Friday evening and Saturday morning. The Fathers continued with their interventions on part two of Instrumentum Laboris. Once they had completed this section they began to listen to interventions on part three, Vatican spokesman Fr. Federico Lombardi, SJ, told the media Fr. Lombardi said that there were 75 interventions in the plenary session. There were a good number of interventions from Fathers representing Europe, Africa, the Middle East, and Latin America. He noted there were few interventions from North America.
A number of themes emerged from the interventions including the spirituality of family life, the missionary responsibility of families to look after and foster good marriages, the role of various family movements in the Church, and ways that the Church can remain close and show tenderness to families that are struggling.
There were also a number of interventions on the relationship and balance between justice and mercy. The media was told that there are divergent views on this issue amongst the Fathers. One of the Fathers said that mercy does not mean an abandonment of the Church’s teaching. His Eminence Beatitude Baselios Cleemis Thottunkal, President of the Indian Bishops Conference and head of the Syro-Malankara Catholic Church, was a guest at the press briefing. He told the media that mercy means conversion which is reciprocal. “The Gospel demands this as a condition. The Kingdom of God is at hand, be converted,” he said.
Concern was also expressed for military families. Many military personnel are far from home and often separated from their families for extended periods. These men and women, as well as their families, are in need of special pastoral care.
The Fathers acknowledged that due to diverse situations and contexts there is no such thing as a "typical family". Many of them spoke about indissolubility being one of the essential elements of Christian marriage.
A number of Fathers also spoke earnestly about marriage preparation. Many considered pre-marriage formation to be seriously lacking. One Father suggested that the bishops themselves needed to penitentially admit that they had failed to provide formation for the lay faithful in this regard. There was a suggestion in another intervention that couples, like those in formation for the priesthood or religious life, also need a "novitiate" time before entering into the sacrament of marriage. It was thought that the crisis in religious and priestly vocations is directly linked to the crisis in family life.
Fr. Lombardi was asked questions about the process of the Synod after a suggestion was reported that, in the future, Synod Assemblies be longer processes which begin with continental meetings first. This means that issues would be more focused and refined when they were brought to the universal Synod Assembly. His Beatitude Cardinal Thottunkal responded by saying that things have to start in local contexts so that it can be brought to Synod Assemblies like this one. He said that he saw no contradiction in this kind of methodology and thought that the fruits of such a process could be much better for the whole church.
Lombardi explained that the Instrumentum Laboris could be changed if, in the small groups, an absolute majority proposed changes. This proposal would then go to the Synod Committee. He reminded the media that interventions in the plenary were not proposals to the Synod; they are part of the “conversation”.
The effect of migration has been a reoccurring theme in this Synod throughout the first week. Cardinal Thottunkal said that he agreed with Pope Francis’ request that people welcome migrants and be generous to them. He added, however, that he also has his own personal view on the matter. He believes that the world community and leaders should make it possible for people to be accommodated and sustained in their own countries. “We must work to keep these people in their own countries,” he said.
The Synod Fathers will return to work on Monday morning when they will, again break into small groups to discuss part two of Instrumentum Laboris.
Posted by Jesus Caritas Est at 2:31 PM No comments: