POPE FRANCIS TO ANGLICAN ARCHBISHOP "FELLOW CITIZEN OF THE SAINTS..." AND LATEST FROM VATICAN

Posted by Jesus Caritas Est at 7:47 PM No comments:

IN HONOR OF THE YEAR OF FAITH- JCE WORLD NEWS IS SHARING Anthony - Warrior of God. (Image share - Google)

Posted by Jesus Caritas Est at 7:39 PM No comments: 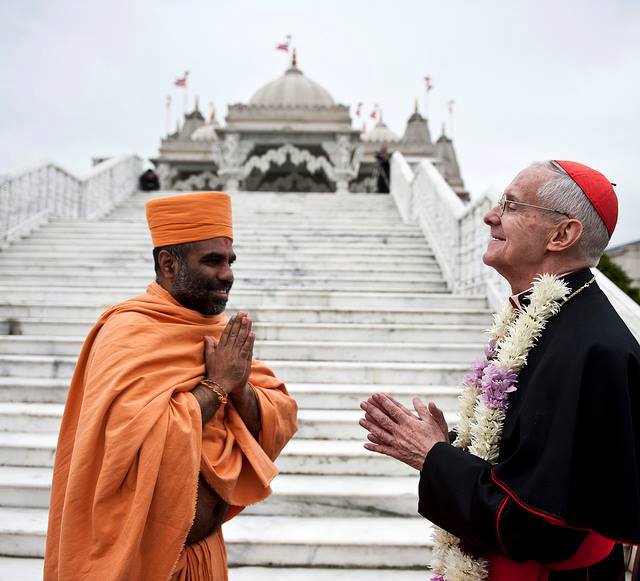 The President of the Holy See's Pontifical Council for Interreligious Dialogue Cardinal Jean-Louis Tauran, and the Bishops' Conference Chair of the Office for Interreligious Relations, the Most Rev Kevin McDonald, joined representatives from many of the world's major religions in London on Thursday, to offer prayers for peace and to bear witness to their longing for a more just and peaceful world.
The gathering, 'Together in Prayer for Peace', held in Westminster Cathedral Hall, took its inspiration from the 1986 Day of Prayer for Peace convened by Pope John Paul II in Assisi, Italy.
Archbishop McDonald echoed the then-Pope's words in his introduction: "Although religious leaders cannot make political decisions in favour of peace, they can, nonetheless, come together in search of the gift of peace."
At the conclusion of the prayers and reflections, everyone present at the well-attended gathering stood for the 'Pledge for Peace' - 11 commitments promoting dialogue, peace and justice among followers of the world's religions.
Pointing out that only a minority of people live by violence, Cardinal Tauran championed prayer and unity as the twin pillars of a more peaceful world:
"By praying for peace we allow God to transform and inspire us to be witnesses and bearers of peace".
The representatives were:
Mrs Annabel Knight-Djalili, Bahá'í
Lama Gelongma Zangmo, Buddhist
Monsignor Peter Fleetwood, Christian
His Holiness Nirliptananda Swami, Hindu
Mr Bakul Mehta and Dr Harshad Sanghrajka, Jain
Dr Jonathan Gorsky, Jewish
Shaykh Ibrahim Mogra, Muslim
Lord Singh of Wimbledon, Sikh
Ervad Shahyan Dastur and Ervad Rustom K Bhedwar, Zoroastrian
SHARED FROM IND. CATH. NEWS - PHOTO SHARE NEWS.VA -
Posted by Jesus Caritas Est at 7:36 PM No comments:

ASIA NEWS REPORT
by Melani Manel PereraSome vandals destroyed a statue of the Virgin and attempted to set fire to the shrine of St. Francis Xavier in Angulana (Archdiocese of Colombo). The consecrated hosts, however, remained intact and the faithful see this a sign from Jesus: "No one can destroy the love of Christ."

Colombo (AsiaNews) - There is growing religious intolerance in Sri Lanka: a group of unknown persons attacked the Catholic Church of St. Francis Xavier in Angulana in the Archdiocese of Colombo. The vandals destroyed an ancient statue of the Virgin, and then demolished the tabernacle: they removed it from the altar trying to set fire to the Eucharist. The incident occurred on June 5th at around 10 pm, but so far the police have not yet identified the perpetrators.
For the past several months attacks against religious minorities have been on the rise in Sri Lanka, particularly Christian and Islamic. These attacks are usually fomented by Buddhists extremist groups (Bodu Bala Sena or Sinhala Ravaya), struggling to protect the Sinhalese population and Buddhist (the majority, ed)  religion. Such attacks are new to the country, where attacks occur infrequently religious roots.
The faithful of the archdiocese have been shocked by what happened. But many believe that in the midst of the raid a miracle also took place, which has refreshed and reinvigorated their faith. Although the tabernacle was found completely soaked in kerosene - police believe at least 30 liters - the consecrated hosts did not catch fire, remaining intact.

"This - say the faithful to AsiaNews - is a powerful miracle, through which Jesus is giving a message to our society and those who carry out such attacks, no one can destroy Christ and his love. Because he died, he gave up his life for us and then rose again. Nobody can do anything to him. "

SHARED FROM ASIA NEWS IT
Posted by Jesus Caritas Est at 7:57 AM No comments:

ST. MARY MACKILLOP MEDAL GIVEN TO POPE BY SR. CASEY OF AUSTRALIA 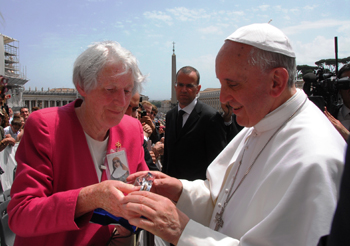 Pope Francis with Sr Maria Casey who presented him with a St Mary MacKillop medal
Sister Maria Casey, rsj presented the Holy Father, Pope Francis with a formal St Mary of the Cross MacKillop medal during her visit to Rome last month.
The limited edition medal is one of those struck to commemorate the canonisation of Australia's first saint in October 2010.
"The first Wednesday after Pentecost on 22 May, I attended the Pope's General Audience in St Peter's Square and after the General Audience I was very privileged to be among those to meet and speak with the Holy Father," she says.
This is when Sr Maria presented the medal to Pope Francis.
"His Holiness was very interested in Mary MacKillop and he sent his blessing to all the Sisters, their family and friends and to all Australians."
The Sydney-based Josephite found Pope Francis to be humble, warm, friendly and someone with "the human touch."
"His ordinariness and ability to be totally present with each person he spoke to was very much in evidence as he made his way along the line of people waiting to meet him," she says, recalling how there were two nuns from the Chinese mainland in the line in which she stood waiting to meet His Holiness.
"He fully engaged the two nuns as he did with everyone else he met that day," she says.
The former Postulator for the Cause of Mary MacKillop, current President of the Canon Law Society of Australia and New Zealand, Sr Maria is also Vicar of Consecrated Life for the Archdiocese of Sydney and in late May, was in Rome for a conference on New Forms of Consecrated Life. This had been the subject of her dissertation some years ago when she studied for her degree in canon law at Saint Paul University, Ottawa. 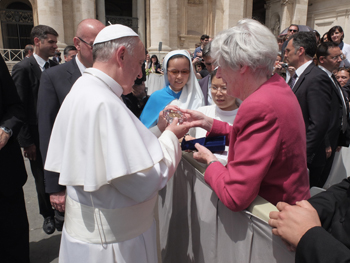 Sr Maria Casey presents Pope Francis with a limited edition St Mary MacKillop Medal
The Conference in Rome which was attended by international experts on canon law, religious, priests, church leaders and representatives of 25 different movements and other emerging forms of consecrated life took place over two days.
Once over, Sr Maria who had spent many years in Rome during her time as Postulator for the Cause, had several other appointments. So she stayed on a few more days and was able to attend the General Audience in St Peter's Square after which she was among those with special tickets who met and spoke with the Holy Father.
"Before the Audience, Pope Francis travelled in the popemobile going as near to as many sections of the very large crowd as he could. Later he would walk in front of the barricades and meet and speak with as many people as possible," she says.
For Sr Maria it was both "humbling and impressive" to see his interaction as he made his way along a crowded throng of men, women and children.
"Some threw their arms around him and gave him a big hug, and at one point there was a woman who wanted to give him a friendship bracelet. I watched as he held out his right hand for her to tie on the bracelet. But in her nervousness she was all thumbs and had trouble tying the knot. At no stage did he try to hurry her. Instead he smiled and spoke with her and put her completely at ease."
Sr Maria was struck by how attentive Pope Francis was to each person or child he met. Smiling, he accepted their gifts of flowers, baskets of olives, statues and pictures. She was also impressed by his fluent English which Pope Francis learned during three months of intensive study while staying at the Jesuit Milltown community in Dublin. 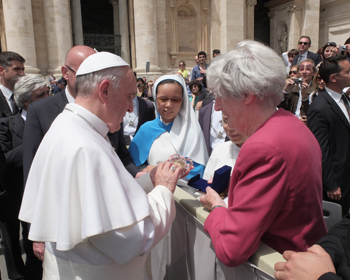 Holding the medal presented by Sr Maria Casey the Holy Father inspects the reverse side with its engraved map of Australia
She was also struck by the Holy Father's reflections on the significance of Pentecost in an address he gave that day as part of the General Audience.
"Let us witness to the newness, hope and joy that the Lord brings to life. Let us feel within us 'the delightful comforting joy of evangelising, because evangelising, proclaiming Jesus, gives us joy," he said but warned that only a faithful and intense relationship with God made it possible to get out of our closedness and proclaim the Gospel with clear and fearless speech.
"Without prayer our acts are empty, and our proclamation has no soul. It is not inspired by the Spirit," he said.
Pope Francis is the third Pontiff Sr Maria has been "honoured and privileged to meet."
"Fourth if you count being among the Sisters of St Joseph's guard of honour for Pope Paul VI when was in Sydney in 1970 and came to North Sydney to pray at St Mary MacKillop's tomb," she says with a smile.
In 1995 during the Beatification of St Mary of the Cross MacKillop, Sr Maria met Blessed Pope John Paul II and in 2010 she met Pope Benedict at the Canonisation ceremony for Australia's first saint.
For a video or the complete transcript of Pope Francis' Reflections on Pentecost delivered at the General Audience in St Peter's Square on 22 May log on to http://www.vatican.va/holy_father/francesco/audiences/2013/documents/papa-francesco_20130522_udienza-generale_en.html
SHARED FROM ARCHDIOCESE OF SYDNEY
Posted by Jesus Caritas Est at 7:49 AM No comments:

Friday of the Tenth Week in Ordinary Time

So death is at work in us, but life in you.
Since, then, we have the same spirit of faith,
according to what is written, “I believed, therefore I spoke,”
we too believe and therefore speak,
knowing that the one who raised the Lord Jesus
will raise us also with Jesus
and place us with you in his presence.
Everything indeed is for you,
so that the grace bestowed in abundance on more and more people
may cause the thanksgiving to overflow for the glory of God.


St. Methodius I of Constantinople
PATRIARCH OF CONSTANTINOPLE
Feast: June 14


source: http://www.ewtn.com/saintsHoly/saints/M/stmethodiusiofconstantinople.asp#ixzz1xl6Y6vrD
Posted by Jesus Caritas Est at 7:18 AM No comments: