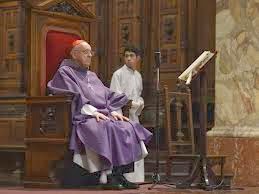 Pope Francis presides the Lenten Station at St. Anselm Basilica, followed by Holy Eucharist for Ash Wednesday at St Sabina Basilica in Roma. Homily below. Pope Francis delivered the homily at Mass to mark the beginning of the Lenten season on Wednesday - Ash Wednesday. In his remarks to the gathered faithful, the Holy Father spoke of the three hallmarks of Christian struggle during the penitential season: prayer, fasting and almsgiving. Below, please find Vatican Radio's full English translation of the Holy Father's prepared remarks.   “Rend your hearts and not your garments” (Joel 2:13). With these insightful words of the prophet Joel, the liturgy introduces us into Lent today, indicating the conversion of the heart characteristic of this time of grace. The prophetic call is a challenge for all of us, without exception, and reminds us that conversion is not a matter reducible to outward forms or vague intentions, but engages and transforms one’s entire existence from the center of the person, from the conscience. We are invited to embark on a journey in which, in defiance of the routine, we strive to open our eyes and ears, but especially the heart, to go beyond our “little garden.” To open oneself to God and to others: we live in an increasingly artificial world, in a culture of “doing”, [a culture] of the “useful”, in which we exclude God from our horizon without even realizing it. Lent calls us to “give ourselves a ‘shake-up’”, to remember that we are creatures, that we are not God. We run the risk of closing ourselves to others also: we risk forgetting them, too - but only when the difficulties and sufferings of our brothers challenge us, only then we can start our journey of conversion towards Easter. It is an itinerary that includes the cross and sacrifice. Today’s Gospel shows the elements of this spiritual journey: prayer , fasting and almsgiving (cf. Mt 6,1-6.16-18 ). All three involve the need not to be dominated by the appearance of things: the appearance of things does not matter – nor does the value of life depend on the approval of others or on success, but from how much we have inside. The first element is the prayer. Prayer is the strength of the Christian and of every believing person. In the weakness and fragility of our life, we can turn to God with the confidence of children and enter into communion with Him. In the face of so many wounds that hurt us and that could harden the heart, we are called to dive into the sea of prayer, which is the sea of God’s boundless love, to enjoy its tenderness. Lent is a time of prayer, a more intense, more diligent prayer, [one] more able to take care of the needs of the brethren, to intercede before God for the many situations of poverty and suffering. Listen: RealAudioMP3 The second element of the Lenten journey is fasting. We must be careful not to make a formal fasting, or one that in truth “satisfies” us because it makes us feel as though we have all in order. Fasting makes sense if it really affects our security, and also if a benefit to others comes from it, if it helps us to grow in the spirit of the Good Samaritan, who bends down to his brother in need and takes care of him. Fasting involves choosing a sober life, which does not waste, which does not “discard”. Fasting helps us to train the heart to essentiality and sharing. It is a sign of awareness and responsibility in the face of injustices, abuses, especially towards the poor and the little ones, and is a sign of our trust in God and His providence. The third element is almsgiving: it is a sign of gratuity because alms are given to someone from whom you would not expect to receive anything in return. Gratuity should be one of the characteristics of a Christian, who, aware of having received everything from God freely, that is without any merit, learns to give to others freely. Today often gratuity is not part of everyday life, where everything is bought and sold. Everything is calculation and measurement. Almsgiving helps us to live the gratuitousness of the gift, which is freedom from the obsession with possessing things, [freedom from] the fear of losing what one has, from the sadness of those who do not want to share their well-being with others. With its calls to conversion, Lent comes providentially to rouse us, to shake us from our torpor, from the risk of moving forward [merely] by inertia. The exhortation that the Lord speaks to us through the prophet Joel is loud and clear: "Return to me with all your heart” (Joel 2:12). Why must we return to God? Because something is wrong in us, in society, in the Church - and we need to change, to turn things around, to repent! Once again Lent comes to make its prophetic appeal, to remind us that it is possible to realize something new within ourselves and around us, simply because God is faithful, continues to be full of goodness and mercy, and is always ready to forgive and start over from scratch. With this filial confidence, let us set out on our way! Text from Vatican Radio website
Posted by Jesus Caritas Est at 12:12 PM No comments:

POPE FRANCIS Lent Angelus Message “In these days the Church asks us to ponder with joy and gratitude God’s immense love..."

If the blessing and distribution of ashes take place outside Mass, it is appropriate that the Liturgy of the Word precede it, using texts assigned to the Mass of Ash Wednesday.

Even now, says the LORD,
return to me with your whole heart,
with fasting, and weeping, and mourning;
Rend your hearts, not your garments,
and return to the LORD, your God.
For gracious and merciful is he,
slow to anger, rich in kindness,
and relenting in punishment.
Perhaps he will again relent
and leave behind him a blessing,
Offerings and libations
for the LORD, your God.

Blow the trumpet in Zion!
proclaim a fast,
call an assembly;
Gather the people,
notify the congregation;
Assemble the elders,
gather the children
and the infants at the breast;
Let the bridegroom quit his room
and the bride her chamber.
Between the porch and the altar
let the priests, the ministers of the LORD, weep,
And say, “Spare, O LORD, your people,
and make not your heritage a reproach,
with the nations ruling over them!
Why should they say among the peoples,
‘Where is their God?’”

Then the LORD was stirred to concern for his land
and took pity on his people.

Brothers and sisters:
We are ambassadors for Christ,
as if God were appealing through us.
We implore you on behalf of Christ,
be reconciled to God.
For our sake he made him to be sin who did not know sin,
so that we might become the righteousness of God in him.

Working together, then,
we appeal to you not to receive the grace of God in vain.
For he says:

In an acceptable time I heard you,
and on the day of salvation I helped you.

Jesus said to his disciples:
“Take care not to perform righteous deeds
in order that people may see them;
otherwise, you will have no recompense from your heavenly Father.
When you give alms,
do not blow a trumpet before you,
as the hypocrites do in the synagogues and in the streets
to win the praise of others.
Amen, I say to you,
they have received their reward.
But when you give alms,
do not let your left hand know what your right is doing,
so that your almsgiving may be secret.
And your Father who sees in secret will repay you.

“When you pray,
do not be like the hypocrites,
who love to stand and pray in the synagogues and on street corners
so that others may see them.
Amen, I say to you,
they have received their reward.
But when you pray, go to your inner room,
close the door, and pray to your Father in secret.
And your Father who sees in secret will repay you.

“When you fast,
do not look gloomy like the hypocrites.
They neglect their appearance,
so that they may appear to others to be fasting.
Amen, I say to you, they have received their reward.
But when you fast,
anoint your head and wash your face,
so that you may not appear to be fasting,
except to your Father who is hidden.
And your Father who sees what is hidden will repay you.”
Posted by Jesus Caritas Est at 11:04 AM No comments: