Posted by Jesus Caritas Est at 9:39 AM No comments:

AN AMAZING NEW POP-MACHINE made by Coca-Cola brings peace among two countries. This video went viral on the web with over 1 MILLION views.
About the Coca-Cola Machine:
In March 2013, Coca-Cola set out to break down barriers and create a simple moment of connection between two nations -- India and Pakistan. The initiative "Small World Machines" provided a live communications portal between people in India and Pakistan and showed that what unites us is stronger than what sets us apart. The key to engaging with each other through the machines was simple: people in India and Pakistan could complete a task, like touching hands, drawing peace, love, and happiness symbols -- together. (Shared from Coca-Cola)
Posted by Jesus Caritas Est at 9:31 AM No comments:

Part 1 Click http://jceworld.blogspot.ca/2013/06/free-catholic-movies-lion-witch-and.html
IN HONOR OF THE YEAR OF FAITH JCE NEWS will be showing some of the Best Catholic Films of all time. Here is the drama of The Lion, the Witch and the
Wardrobe, PART 2 in English :

Posted by Jesus Caritas Est at 9:25 AM No comments:

Mark 12: 13 - 17
13And they sent to him some of the Pharisees and some of the Hero'di-ans, to entrap him in his talk.14And they came and said to him, "Teacher, we know that you are true, and care for no man; for you do not regard the position of men, but truly teach the way of God. Is it lawful to pay taxes to Caesar, or not?15Should we pay them, or should we not?" But knowing their hypocrisy, he said to them, "Why put me to the test? Bring me a coin, and let me look at it."16And they brought one. And he said to them, "Whose likeness and inscription is this?" They said to him, "Caesar's."17Jesus said to them, "Render to Caesar the things that are Caesar's, and to God the things that are God's." And they were amazed at him.

Always Something New to Learn

Piano Suite Premier is designed to help beginners through intermediate players become competent and keen musicians. With this much content, you'll always be challenged:

Piano Suite Premier has been recognized the following organizations:
Read all Reviews

Posted by Jesus Caritas Est at 9:13 AM No comments: 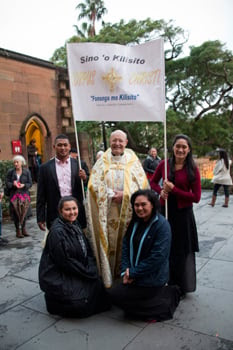 In brief respite from rain, Bishop Porteous with a group of Tongan Australians and their prayer For One Human Family
Sunday's stormy weather, plummeting temperatures and pelting rain triggered the cancellation of the annual Walk with Christ Procession of the Blessed Sacrament through the CBD to the Cathedral. However  the winter conditions didn't stop 4000 crowding into St Mary's Cathedral to mark the Feast of Corpus Christi and join Pope Francis in the world's first global Eucharistic Adoration.
"Being inside the Cathedral lent a special beauty and real sense of solemnity to the day and the joy and devotion of all those who had braved the weather was overwhelming," says Cathy Kennedy, Director of CREDO, the Archdiocese of Sydney's Catholic Renewal and Evangelisation Diocesan Office.
Cathy says in the past the Procession of the Blessed Sacrament on the Feast of Corpus Christi has had to be cancelled midway through the walk due to heavy rain.
"But this is the first time any of us can remember the weather being so bad that a decision was made to cancel the procession entirely and to hold the celebration instead inside the Cathedral," she says.
The decision was made early Sunday morning as wild gusts and heavy rain drenched the city.
"With the Anzac Bridge and other roads closed by the storm, it was decided not to add to the traffic chaos with the Procession," Cathy says.
The cancellation on the annual Corpus Christi Procession of the Sacrament was posted on the Archdiocese website and CREDO organised volunteers to be at St Patrick's Church Hill, Wynyard where participants in the Walk with Christ had been told to gather, to let them know about the change in plan.
While thousands had been expected to take part in the Procession, what wasn't expected was the huge turnout at the Cathedral where it was literally standing room only. Cardinal Pell delivered the homily at Sunday's Feast of Corpus Christi and Eucharistic Adoration
The Archbishop of Sydney, Cardinal George Pell delivered the homily and although there was no Walk with Christ through the CBD, Bishop Julian Porteous, Episcopal Vicar of Evangelisation and Renewal carried the Holy Sacrament in a solemn procession through the Cathedral, accompanied by 10 seminarians from the Seminary of the Good Shepherd at Homebush and the Mater Redemptoris Missionary Seminary at Chester Hill and followed by the Knights of the Holy Sepulchre.
The 4000 at the Cathedral also joined in an hour of Eucharistic Adoration as part of the Holy Father's global initiative that saw churches and cathedrals across the world synchronise their watches so millions of faithful could simultaneously pray together in what was one of the most significant events of this Year of Faith.
While many millions of Catholics from every corner of the globe were able to participate at the same time as the live broadcast from Rome's St Peter's Basilica from 5 pm local time, nations such as Australia, New Zealand and parts of the US and South America, the time difference made this impossible.  So instead of joining the global Adoration at what would have been 1.am Monday morning Sydney time, Cardinal Pell designated the 3 pm Corpus Christi celebrations at the Cathedral as the official Cathedral Adoration Event for the faithful to be united with Pope Francis.
shared from ARCHDIOCESE OF SYDNEY
Posted by Jesus Caritas Est at 9:11 AM No comments:


source: http://www.ewtn.com/saintsHoly/saints/F/stfranciscaracciolo.asp#ixzz1woocho5J
Posted by Jesus Caritas Est at 6:15 AM No comments: