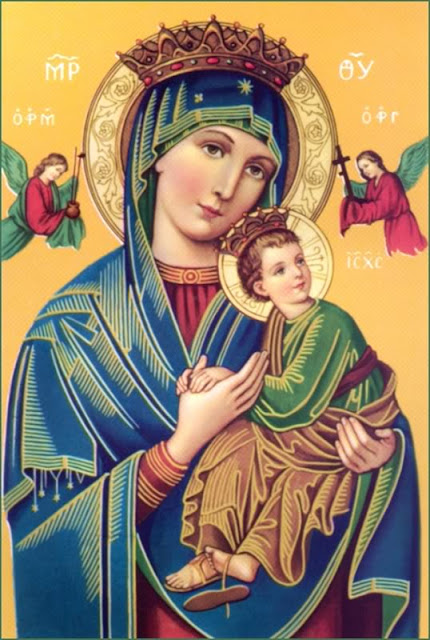 June 27, is the feast day of Our Lady of Perpetual Help, also known as Our Lady of Perpetual Succor, and the Madonna di San Matteo. We are reminded that Our Blessed Mother constantly intercedes for us with Jesus, Our Lord—in our times of struggle, pain, and difficulty.
Mother of Perpetual Help, you have been blessed and favored by God. You became not only the Mother of the Redeemer but the Mother of the redeemed as well. We come to you today as your loving children. Watch over us and take care of us. As you held the child Jesus in your loving arms, so take us in your arms. Be a mother ready at every moment to help us. For God who is mighty has done great things for you, and His mercy is from age to age on those who love Him. Our greatest fear is that in time of temptation, we may fail to call out to you, and become lost children. Intercede for us, dear Mother, in obtaining pardon for our sins, love for Jesus, final perseverance, and the grace always to call upon you, Mother of Perpetual Help.
Our Lady of Perpetual Help is a title and devotion given to Our Blessed Mother, following an association with a Byzantine painting originating as early as the 13th century. Since that time, this golden image has inspired Catholics to pray to the Blessed Virgin Mary for intercession with her beloved Son, Jesus Christ. The painting, as interpreted by art historians and theologians, represents a message of salvation and reparation: “You can come to me.” The icon, possibly painted in Crete by an unknown artist, depicts Our Blessed Mother, holding the infant Christ. To her right is the Archangel Michael, carrying the lance and sponge of the crucifixion. On her left is the Archangel Gabriel carrying the cross and nails used in the crucifixion. Also known as the Theotokos of the Passion, the icon suggests that Christ, even as an infant, knew of His passion and death, and is seeking the comfort of his mother.
The origins and early history of the painting are lost to record, but in the fifteenth century, the icon was first venerated at the Church of San Matteo. Prior to that, history suggests that the painting was stolen in Crete, and brought to Italy by a pious merchant, who eventually (possibly following an apparition of the Blessed Mother to his daughter) bequeathed the painting to the church, which was served for a time by the Hermits of Saint Augustine. The picture remained in the church for nearly three hundred years.
In 1812 the French invaded Rome and destroyed the church. The picture disappeared. Between 1863 and 1865 it was discovered in an oratory of the Augustinian Fathers at Santa Maria in Posterula. Under the direction of Pope Pius XI, the original icon was displayed for public veneration under the care of the Redemptorist Fathers at the Church of Saint Alphonsus (built on the original site of the destroyed Church of San Matteo), where it remains today.
Text shared from 365 Rosaries Blog
Powerful Prayer to Our Lady of Perpetual Help
O MOTHER of Perpetual Help, Grant that I may ever invoke Your most powerful name, Which is the safeguard of the living And the salvation of the dying.
O purest Mary! O sweetest Mary! Let your name henceforth Be ever on my lips.
Delay not, O Blessed Lady, To succor me Whenever I call on you.
In all my temptations, In all my needs, I will never cease To call on you Ever repeating Your sacred name, Mary, Mary!
Oh, what consolations, What sweetness, What confidence, What emotion fills my soul When I utter your sacred name, Or even only think of you!
I thank the Lord For having given you, For my good, So sweet, so powerful, So lovely a name.
But I will not be content With merely uttering your name. Let my love for you prompt me Ever to hail you, Mother of Perpetual Help.
Mother of Perpetual Help, Pray for me And grant me the favor I confidently ask of you.
Posted by Jesus Caritas Est at 11:40 PM 1 comment:

Saint June 27 : St. Cyril of Alexandria : #Doctor of the #Church 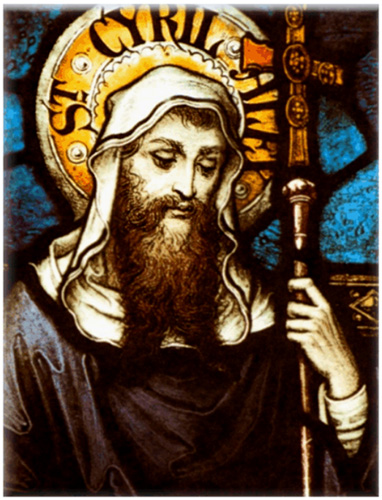 St. Cyril of Alexandria
DOCTOR OF THE CHURCH
Feast: June 27
Posted by Jesus Caritas Est at 10:15 PM No comments:

#BreakingNews Pope Francis "...not only ask forgiveness to the gay person who is offended." Interview on Plane - FULL TEXT 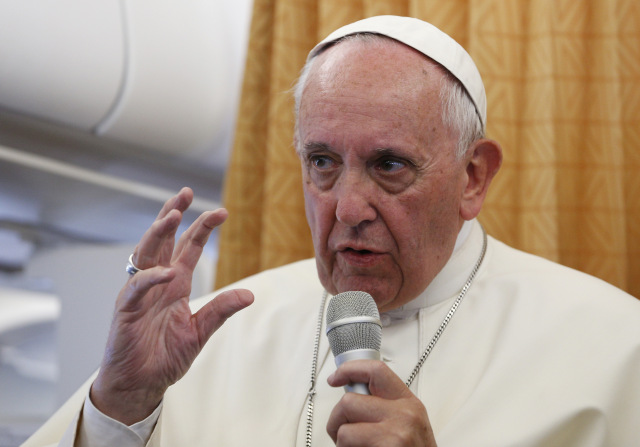 Pope Francis on the Plane to Rome from Armenia spoke to reporters on June 26, 2016. This was at the end of his three-day papal visit to Armenia. He spoke about Brexit, the Orlando shooting addressing comments that Church should apologize to homosexual persons for having “marginalized” them which were mentioned by Cardinal Marx.
Please find below the full text of the press conference, translated by Catholic News Agency: 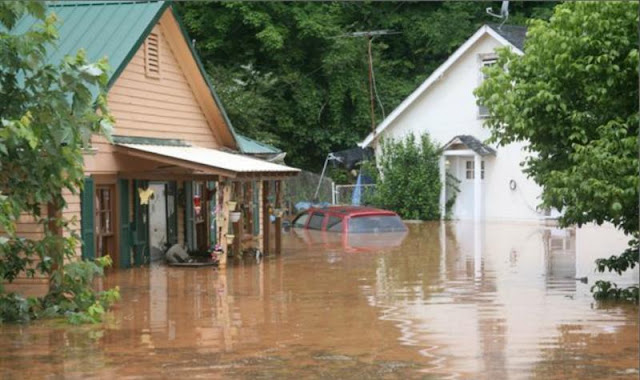 West Virginia flooding has resulted in 25 deaths and left hundreds homeless In some areas 250 millimetres of rain was reported. There was also flooding in Texas, and flood watches spread to Louisiana, Mississippi. Some counties will receive federal assistance after the worst flooding in more than a century. U.S. President Barack Obama has declared a major disaster for West Virginia. He also  ordered federal aid to affected individuals for temporary housing, repairs and other programs. A  state of emergency has been declared in 44 of 55 counties. 200 members of the West Virginia National Guard are helping rescue efforts. About 32,000 homes and businesses are without power. , Texas river flooding forced evacuations also and, claimed 6 lives. Please Pray for the affected families.
Posted by Jesus Caritas Est at 8:53 PM No comments: 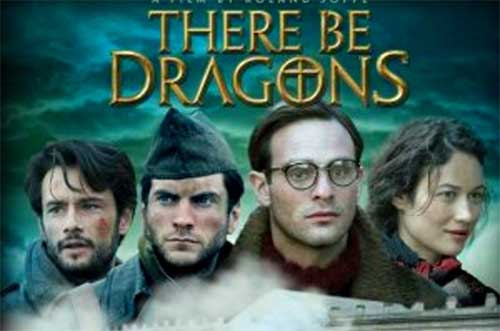 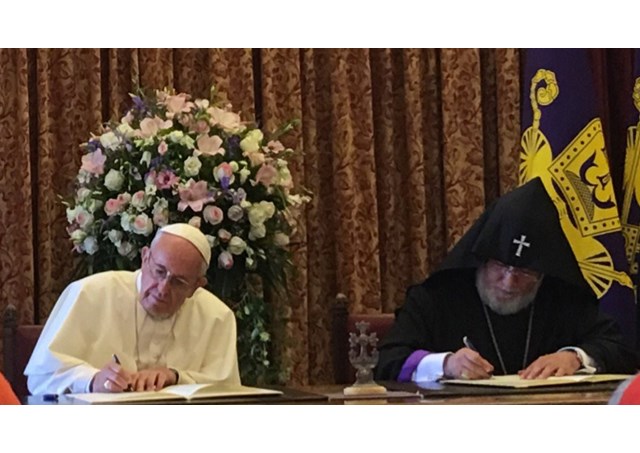 (Vatican Radio) Pope Francis and Catholicos Karekin II, leader of the Armenian Apostolic Church on Sunday signed a common declaration, giving thanks for the progress towards Christian unity, and appealing for peace in the Middle East and other regions torn apart by conflict, terrorism and religious persecution. 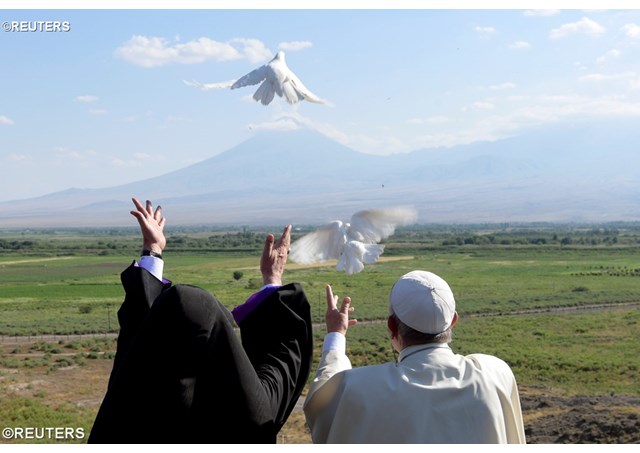 Vatican Radio) Pope Francis ended his three day Apostolic journey to Armenia, his 14th abroad with a visit to ‘Khor Virap’ monastery at the foot of  Mount Ararat. A significant site linked to the conversion of  this nation to Christianity.

The red brick monastery of Khor Virap at the foot of Mount Ararat where tradition holds that Noah’s ark came to rest after the floods is one of Armenia’s most sacred sites. It’s here that the most memorable image of Pope Francis’s visit to Armenia played out.
That of the Pope and the Patriarch standing out against the skyline in unison in the shadow of the snow-capped Mount, as together they release two white doves which flutter into the evening light before soaring up high. A striking gesture which holds within it a symbol of unity and peace.
By contrast the name of the monastery provides a sinking feeling as it means 'deep dungeon'. And while dark and musty dungeons really exist here, some sinking deep into the ground, over six metres under one of the Chapels of the monastery complex, what really matters is that it was in one of these dungeons, often referred to as a well, that Saint Gregory the Illuminator, was held prisoner for thirteen lonng years before bringing about the conversion of the King in 301, so at the beginning of the fourth century. A conversion which led to Armenia becoming the first nation ever to adopt Christianity as a State religion.
And a conversion which was no doubt on the Pope’s mind as together with the Patriarch he made his way up two narrow flights of stairs to the room known as the ‘Well of Saint Gregory’. They were there  to light a candle before making their way to the nearby Chapel to pray: the Patriarch in Armenian and the Pope in Italian.
Before leaving this land which Pope Francis has described as ‘beloved’ he  expressed the idea that it was a grace to find himself on these heights where, beneath the gaze of Mount Ararat, the very silence seems to speak.  And where the 'khatchkar' – the stone crosses – recount a singular history bound up with rugged faith and immense suffering. A history, he went on to say, replete with magnificent testimonies to the Gospel, to which you the Armenian people are heirs.
Words pronounced a day earlier when he had symbolically watered, once again together with the Patriarch, the seedlings of a vine in a model of Noah’s Ark. New life that grows out of memory.
Posted by Jesus Caritas Est at 3:17 PM No comments:

#PopeFrancis "...on this holy Sunday may we follow God’s call to full communion..." at #Divine Liturgy FULL TEXT - Video 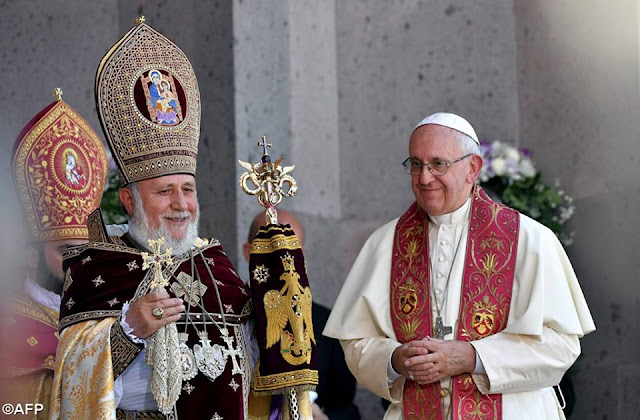 The Divine Liturgy was celebrated in Etchmiadzin, Armenia, by the Catholicos of all Armenians Karekin II who thanked Pope Francis for his “brotherly visit”.