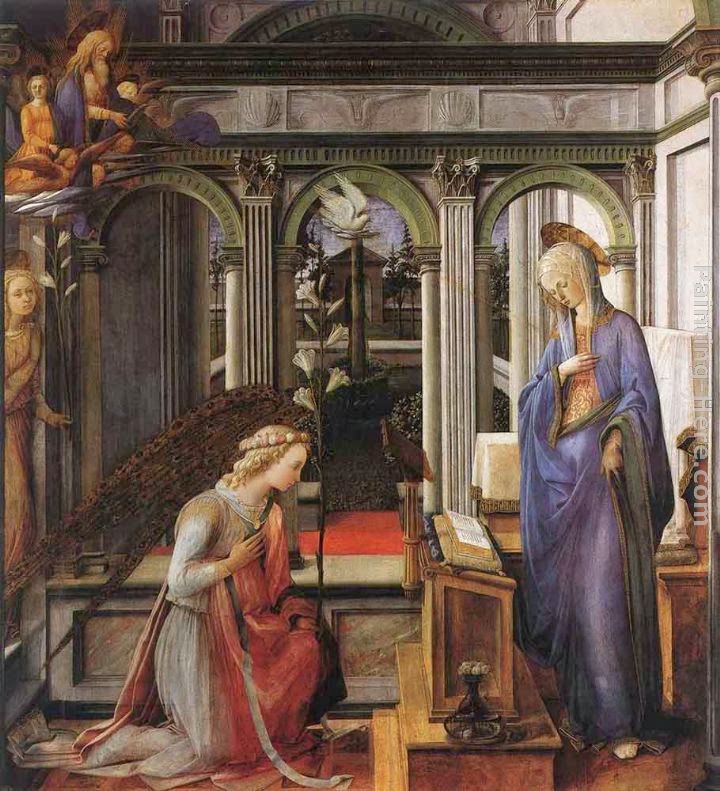 (This Novena honours the nine months during which Our Lady carried Our Blessed Lord in her womb.)

Posted by Jesus Caritas Est at 9:52 AM No comments: 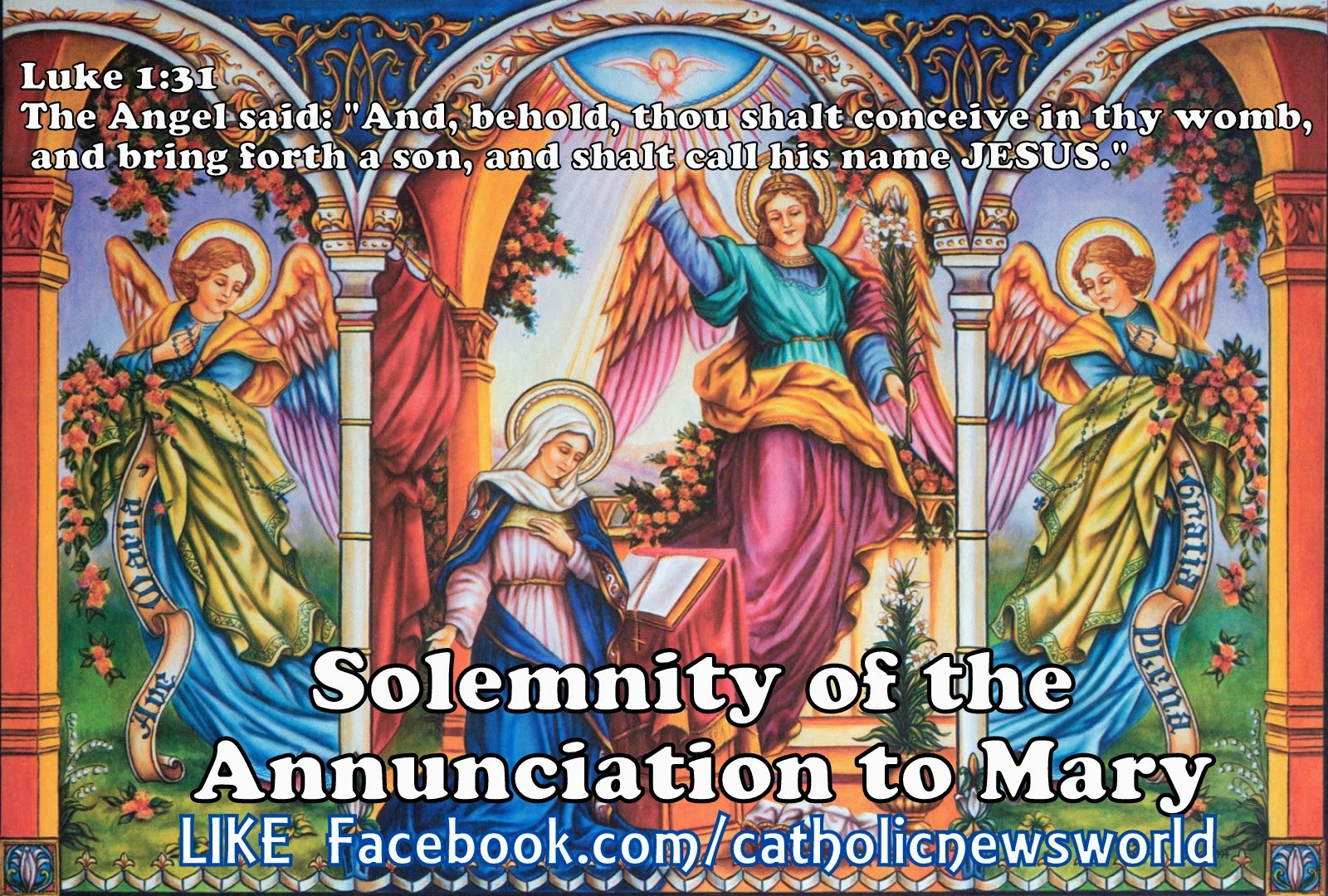 Solemnity of the Annunciation of the Lord

The LORD spoke to Ahaz, saying:
Ask for a sign from the LORD, your God;
let it be deep as the nether world, or high as the sky!
But Ahaz answered,
“I will not ask! I will not tempt the LORD!”
Then Isaiah said:
Listen, O house of David!
Is it not enough for you to weary people,
must you also weary my God?
Therefore the Lord himself will give you this sign:
the virgin shall be with child, and bear a son,
and shall name him Emmanuel,
which means “God is with us!”

Brothers and sisters:
It is impossible that the blood of bulls and goats
take away sins.
For this reason, when Christ came into the world, he said:

“Sacrifice and offering you did not desire,
but a body you prepared for me;
in holocausts and sin offerings you took no delight.
Then I said, ‘As is written of me in the scroll,
behold, I come to do your will, O God.’”

First he says, “Sacrifices and offerings,
holocausts and sin offerings,
you neither desired nor delighted in.”
These are offered according to the law.
Then he says, “Behold, I come to do your will.”
He takes away the first to establish the second.
By this “will,” we have been consecrated
through the offering of the Body of Jesus Christ once for all.


Verse Before The GospelJN 1:14AB

The Word of God became flesh and made his dwelling among us;
and we saw his glory.

The angel Gabriel was sent from God
to a town of Galilee called Nazareth,
to a virgin betrothed to a man named Joseph,
of the house of David,
and the virgin’s name was Mary.
And coming to her, he said,
“Hail, full of grace! The Lord is with you.”
But she was greatly troubled at what was said
and pondered what sort of greeting this might be.
Then the angel said to her,
“Do not be afraid, Mary,
for you have found favor with God.
Behold, you will conceive in your womb and bear a son,
and you shall name him Jesus.
He will be great and will be called Son of the Most High,
and the Lord God will give him the throne of David his father,
and he will rule over the house of Jacob forever,
and of his Kingdom there will be no end.”
But Mary said to the angel,
“How can this be,
since I have no relations with a man?”
And the angel said to her in reply,
“The Holy Spirit will come upon you,
and the power of the Most High will overshadow you.
Therefore the child to be born
will be called holy, the Son of God.
And behold, Elizabeth, your relative,
has also conceived a son in her old age,
and this is the sixth month for her who was called barren;
for nothing will be impossible for God.”
Mary said, “Behold, I am the handmaid of the Lord.
May it be done to me according to your word.”
Then the angel departed from her.
Posted by Jesus Caritas Est at 9:33 AM No comments:


(Vatican Radio) Pope Francis on Tuesday invited all Christians to accept God’s love without being critical and making objections.
He was speaking during the homily at morning Mass in the Casa Santa Marta.
Taking his cue from the Bible reading of the day that speaks of how the children of Israel complained against God during their journey through the desert and of how they objected to the “wretched food” provided, the Pope pointed out that God offers us salvation in a thousand different ways but too often we are incapable of accepting his “divine ways”.
He said that as narrated in the reading from the Book of Numbers the Lord sent in punishment saraph serpents which bit the people and many of them died.
So Moses prayed for the people and obeying the Lord’s command, mounted a bronze serpent on a pole giving salvation to anyone who looked at it after being bitten.
Only Moses’s intercession, and the symbol of the cross on which Christ will die – the Pope said – provides salvation from the poison of the snakes.
And describing the attitude of many Christians today as “spiritually whimsical”, Francis said that we often commit the same kind of error, “becoming sullen and grumbly”.
“How many of us Christians find ourselves ‘poisoned’ by the dissatisfactions of life. Yes: God is good but… we are Christians but… This kind of Christian ends up not opening his heart to God’s Salvation, but always posing conditions. ‘Yes, I want to be saved but in this way…’ This attitude poisons the heart”.
Pope Francis said that to not accept God’s gift in the way it is offered is a sin. It poisons  our soul, deprives it of joy. And Jesus – he said – solved this problem by climbing Mount Calvary.
“Jesus himself takes that poison upon himself. This ‘tepidness’ of ‘half-way’ Christians who show enthusiasm at the start of Jesus’ journey only to become dissatisfied on the way. The only way to heal is to look at the Cross, to look at God who takes upon himself our sins: my sin is there”.
How many Christians – the Pope concluded – today “die in the desert of their sorrow, grumbling and not accepting God’s way”.
“Let’s look at the serpent, at the poison, there, in the body of Christ. The poison of all the sins in the world and let us ask for the grace to accept difficult moments. To accept the divine way of salvation, to accept this ‘wretched food’ that the children of Israel lamented... Let’s accept the paths that the Lord leads us on. May this Holy Week – that begins on Sunday – help us to turn away from the temptation to become “Christians yes, but…”.              (Linda Bordoni)

Posted by Jesus Caritas Est at 9:28 AM No comments:

Saint March 25 : The Annunciation to the Blessed Virgin Mary

Posted by Jesus Caritas Est at 8:50 AM No comments: