Pope Francis says "The merciful look of the Lord reaches us....with this gaze of the divine Master the miracle of the conversion of the sinner begins." Full Text at Angelus 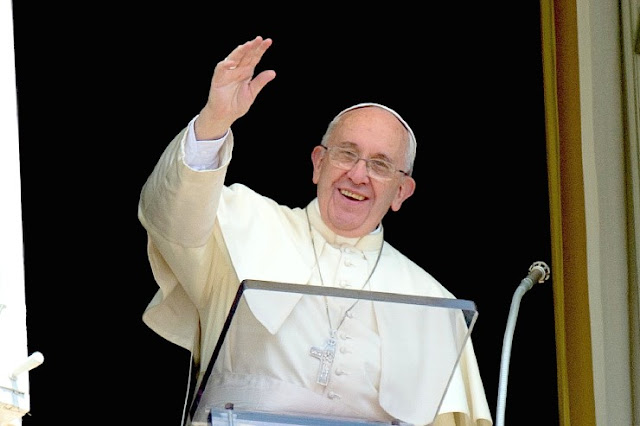 Today's Gospel (cf. Lk 19: 1-10) places us in the wake of Jesus who, on his way to Jerusalem, makes a stop in Jericho. There was so much crowd to welcome him, including a man named Zacchaeus, head of the "publicans", that is, of those Jews who collected taxes on behalf of the Roman empire. He was rich not because of honest earnings, but because he asked for a "bribe", and this increased contempt for him. Zacchaeus "tried to see who Jesus was" (v. 3); he didn't want to meet him, but he was curious: he wanted to see that character he had heard about extraordinary things. He was curious. And being low in stature, "to be able to see it" (v. 4) climbs a tree. When Jesus arrives nearby, he looks up and sees him (see verse 5).

And this is important: the first glance is not from Zacchaeus, but from Jesus, who, among the many faces that surrounded him - the crowd - is looking for just that. The merciful look of the Lord reaches us before we realize that we need it to be saved. And with this gaze of the divine Master the miracle of the conversion of the sinner begins. In fact, Jesus calls him, and calls him by name: "Zacchaeus, come down quickly, for today I must stay at your house" (v. 5). He does not reproach him, he does not give him a "sermon"; he tells him that he must go to him: "he must", because it is the will of the Father. Despite the murmurs of the people, Jesus chooses to stop at the home of that public sinner.

We too would have been scandalized by this behavior of Jesus. But the contempt and the closing towards the sinner do nothing but isolate it and harden it in the evil that it does against itself and against the community. Instead God condemns sin, but tries to save the sinner, he goes to look for it to bring it back on the right path. Whoever has never felt sought by God's mercy, finds it hard to grasp the extraordinary greatness of the gestures and words with which Jesus approaches Zacchaeus.

Jesus' acceptance and attention towards him bring this man to a sharp change of mentality: in a moment he realizes how petty a life is all about money, at the cost of stealing from others and receiving the their contempt. Having the Lord there, at his home, makes him see everything with different eyes, even with a bit of the tenderness with which Jesus looked at him. And his way of seeing and using money also changes: the gesture of giving is replaced by that of giving. In fact, he decides to give half of what he has to the poor and to give back four times to those he has stolen (see verse 8). Zacchaeus discovers from Jesus that it is possible to love for free: so far he was stingy, now he becomes generous; he had the taste for massing, now he rejoices in distributing. Meeting the Love, discovering that he is loved despite his sins, he becomes capable of loving others, making money a sign of solidarity and communion.

May the Virgin Mary obtain for us the grace to always feel the merciful gaze of Jesus upon us, to go out to meet those who have done wrong with mercy, so that they too can welcome Jesus, who "came to seek and save what was lost "(V. 10).

I am saddened by the violence suffered by the Christians of the Tewahedo Orthodox Church of Ethiopia. I express my closeness to this Church and her Patriarch, dear Brother Abuna Matthias, and I ask you to pray for all the victims of violence in that land.

I wish to extend my heartfelt thanks to the Municipality and the Diocese of San Severo in Puglia for the signing of the memorandum of understanding which took place on Monday 28 October, which will allow the laborers of the so-called "ghettos of the Capitanata", in the Foggia area, to obtain a domiciliation at the parishes and registration with the municipal registry office. The possibility of having identity and residence documents will offer them new dignity and will allow them to exit from a condition of irregularity and exploitation. Thank you very much to the City Council and to all those who have worked on this plan.

I address my cordial greeting to all of you, Romans and pilgrims. In particular, I greet the historical corporations of the Schützen and the Knights of St. Sebastian from various European countries; and the faithful from Lordelo de Ouro (Portugal).

I greet the groups of Reggio Calabria, Treviso, Pescara and Sant’Eufemia di Aspromonte; I greet the boys of Modena who received the Confirmation, those of Petosino, diocese of Bergamo, and the Scouts who came by bicycle from Viterbo. I greet the members of the Hakuna movement from Spain.

I wish you all a good Sunday. Please don't forget to pray for me. Good lunch and goodbye.
Full Text Source: Vatican.va - Unofficial Translation
Posted by Jesus Caritas Est at 9:14 AM No comments: 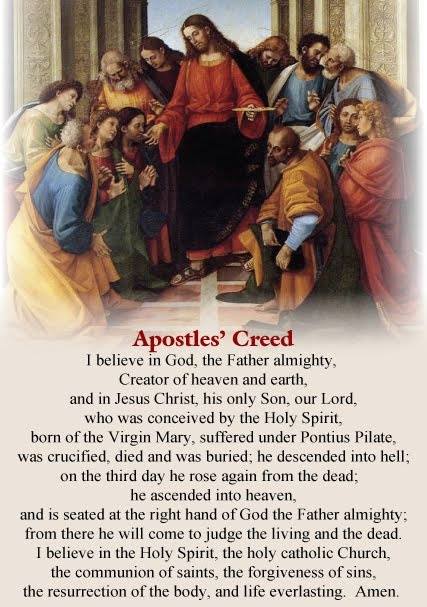 Before the LORD the whole universe is as a grain from a balance
or a drop of morning dew come down upon the earth.
But you have mercy on all, because you can do all things;
and you overlook people's sins that they may repent.
For you love all things that are
and loathe nothing that you have made;
for what you hated, you would not have fashioned.
And how could a thing remain, unless you willed it;
or be preserved, had it not been called forth by you?
But you spare all things, because they are yours,
O LORD and lover of souls,
for your imperishable spirit is in all things!
Therefore you rebuke offenders little by little,
warn them and remind them of the sins they are committing,
that they may abandon their wickedness and believe in you, O LORD!

Brothers and sisters:
We always pray for you,
that our God may make you worthy of his calling
and powerfully bring to fulfillment every good purpose
and every effort of faith,
that the name of our Lord Jesus may be glorified in you,
and you in him,
in accord with the grace of our God and Lord Jesus Christ.

We ask you, brothers and sisters,
with regard to the coming of our Lord Jesus Christ
and our assembling with him,
not to be shaken out of your minds suddenly, or to be alarmed
either by a "spirit," or by an oral statement,
or by a letter allegedly from us
to the effect that the day of the Lord is at hand.

At that time, Jesus came to Jericho and intended to pass through the town.
Now a man there named Zacchaeus,
who was a chief tax collector and also a wealthy man,
was seeking to see who Jesus was;
but he could not see him because of the crowd,
for he was short in stature.
So he ran ahead and climbed a sycamore tree in order to see Jesus,
who was about to pass that way.
When he reached the place, Jesus looked up and said,
"Zacchaeus, come down quickly,
for today I must stay at your house."
And he came down quickly and received him with joy.
When they all saw this, they began to grumble, saying,
"He has gone to stay at the house of a sinner."
But Zacchaeus stood there and said to the Lord,
"Behold, half of my possessions, Lord, I shall give to the poor,
and if I have extorted anything from anyone
I shall repay it four times over."
And Jesus said to him,
"Today salvation has come to this house
because this man too is a descendant of Abraham.
For the Son of Man has come to seek
and to save what was lost."
Posted by Jesus Caritas Est at 9:06 AM No comments: 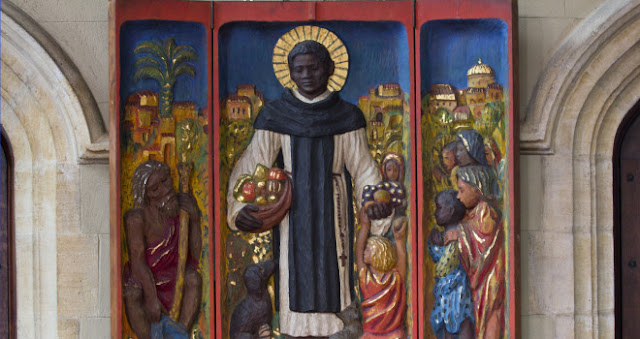 Pope John 23rd chose to remember St. Martin de Porres when he canonized him in 1962. The humble servant of God whose feast day we celebrate on November 3rd, was born in Peru in 1579. He was the son of a nobleman and a young freed slave, and grew up in poverty. Aged 11 he became a sevant in the Dominican priory in Lima, and promoted to almoner, he begged money from the rich to support the poor and sick. Placed in charge of the Dominican's infirmary; known for his tender care of the sick and for his spectacularcures, his superiors dropped the stipulation that "no black person may be received to the holy habit or profession of the and Martin took vows as a brother. He established an and 's for the of the slums. He set up a for the stray and . Martin lived in self-imposed austerity and spent much time in prayer and meditation. He knew St. Rose of Lima. (Vatican.va)
Prayer to St. Martin de Porres

To you Saint Martin de Porreswe prayerfully lift up our heartsfilled with serene confidence and devotion.Mindful of your unboundedand helpful charity to all levels of societyand also of your meekness and humility of heart,we offer our petitions to you.
Pour out upon our familiesthe precious gifts of your solicitous and generous intercession;show to the people of every race and every colourthe paths of unity and of justice;implore from our Father in heaven the coming of His kingdom,so that through mutual benevolence in Godmen may increase the fruits of grace
and merit the rewards of eternal life. Amen. ( Source: https://www.daily-prayers.org)
Posted by Jesus Caritas Est at 8:53 AM No comments: