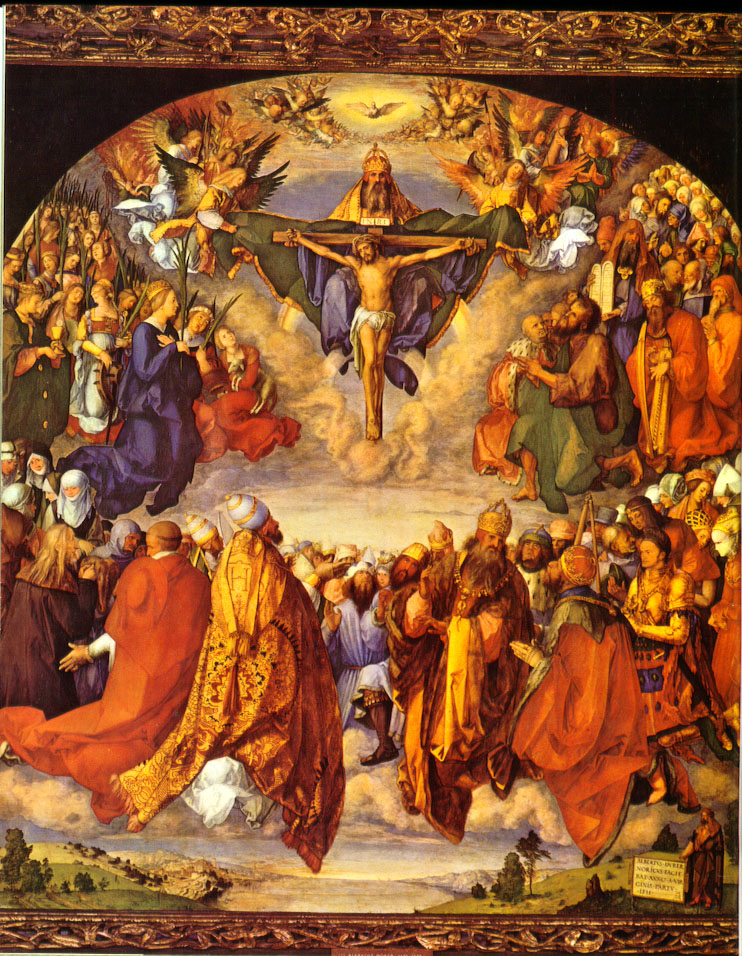 Posted by Jesus Caritas Est at 11:01 PM No comments: 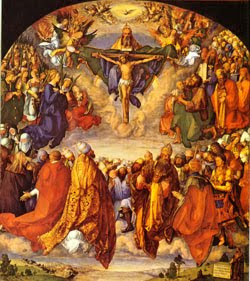 The church in this great festival honours all the saints reigning together in glory; first, to give thanks to God for the graces and crowns of all his elect: secondly, to excite ourselves to a fervent imitation of their virtues by considering the holy example of so many faithful servants of God of all ages, sexes, and conditions, and by contemplating the inexpressible and eternal bliss which they already enjoy, and to which we are invited: thirdly, to implore the divine mercy through this multitude of powerful intercessors: fourthly, to repair any failures or sloth in not having duly honoured God in his saints on their particular festivals, and to glorify him in the saints which are unknown to us, or for which no particular festivals are appointed. Therefore our fervour on this day ought to be such that it may be a reparation of our sloth in all the other feasts of the year; they being all comprised in this one solemn commemoration, which is an image of that eternal great feast which God himself continually celebrates in heaven with all his saints, whom we humbly join in praising his adorable goodness for all his mercies, particularly for all treasures of grace which he has most munificently heaped upon them. In this and all other festivals of the saints God is the only object of supreme worship, and the whole of that inferior veneration which is paid to the saints is directed to give sovereign honour to God alone, whose gifts their graces are: and our addresses to them are only petitions to holy fellow creatures for the assistance of their prayers to God for us. When, therefore, we honour the saints, in them and through them we honour God, and Christ, true God and true man, the Redeemer and Saviour of mankind, the King of the Saints, and the source of all their sanctity and glory. In his blood they have washed their robes: from him they derive all their purity, whiteness, and lustre. We consider their virtues as copies taken from him, the great Original, as streams from his fountain, or as images of his virtues produced by the effusion of his spirit and grace in them. His divine life is their great exemplar and prototype, and in the characteristical virtues of each saint some of his most eminent virtues are particularly set forth: his hidden life in the solitude of the anchorets; his spotless purity in the virgins; his patience or charity in some; his divine zeal in others; in them all in some degree his plenitude of all virtue and sanctity Nor are the virtues of the saints only transcripts and copies of the life or spirit of Christ; they are also the fruit of his redemption; entirely his gifts and graces. And when we honour the saints we honour and praise him who is the Author of all their good; so that all festivals of saints are instituted to honour God and our Blessed Redeemer.
In all feasts of saints, especially in this solemn festival of All Saints, it ought to be the first part of our devotion to praise and thank God for the infinite goodness he has displayed in favour of his elect. A primary and most indispensable homage we owe to God is that of praise, the first act of love and complacency in God and his adorable perfections. Hence the Psalms, the most perfect and inspired model of devotions, repeat no sentiments so frequently or with so much ardour as those of divine adoration and praise. This is the uninterrupted sweet employment of the blessed in heaven to all eternity; and the contemplation of the divine love and other perfections is a perpetual incentive inflaming them continually afresh in it, so that they cannot cease pouring forth all their affections and exhausting all their powers; and conceive every moment new ardour in this happy function of pure love. So many holy solitaries of both sexes in this life have renounced all commerce and pleasures of the world, to devote themselves wholly to the mixed exercises of praise and love, and of compunction and humble supplication. In these, all servants of God find their spiritual strength, refreshment, advancement, delight, and joy. To aid our weakness and supply our insufficiency in magnifying the infinite Lord of all things, and exalting his glory, we have recourse to the spotless victim, the sacrifice of the Lamb of God, put into our hands for us to offer a holocaust of infinite price, equal to the majesty of the Godhead. We also rejoice in the infinite glory which God possesses in himself, and from himself. Deriving from himself infinite greatness and infinite happiness, he stands not in need of our goods, and can receive no accession from our homages as to internal glory; in which consists his sovereign bliss. But there is an external glory which he receives from the obedience and praise of his creatures, which, though it increase not his happiness, is nevertheless indispensably due to him, and an external homage with which all beings are bound to sound forth his sovereign power and sanctity. Nor do we owe him this only for his own greatness and glory, which he possesses in himself, but also for the goodness, justice, wisdom' and power which he manifests in all his works. Compounds of the divine mercies as we are, we are bound to give to God incessant thanks for all the benefits, both in the order of nature and of grace, which he has gratuitously conferred upon us. We owe him also an acknowledgment of praise and thanksgiving for all his creatures from the beginning, and for all the wonders he has wrought in them or in their behalf. For this the psalmist and the prophets so often rehearse his mighty works, and invite all beings to magnify his holy name for them.
SOURCE http://www.ewtn.com/saintsHoly/saints/A/allsaintsday.asp
Posted by Jesus Caritas Est at 10:52 PM No comments: 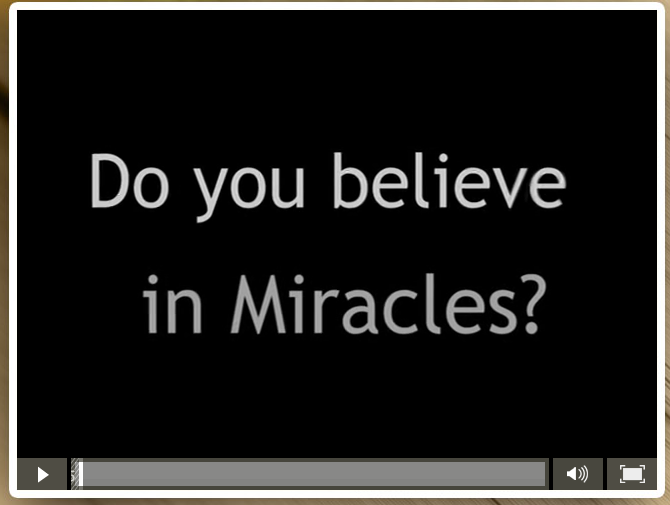 Greg Thomas had been having cancer treatments and his family was making his final arrangements. He went on long walks with his dog when he found an old abandoned church. Praying on the steps every day, Greg then decided to restore the old church. He didn’t realize that God was about to work a miracle to restore him. God is not dead..,SHARE this Amazing Story...

Posted by Jesus Caritas Est at 4:20 PM No comments: 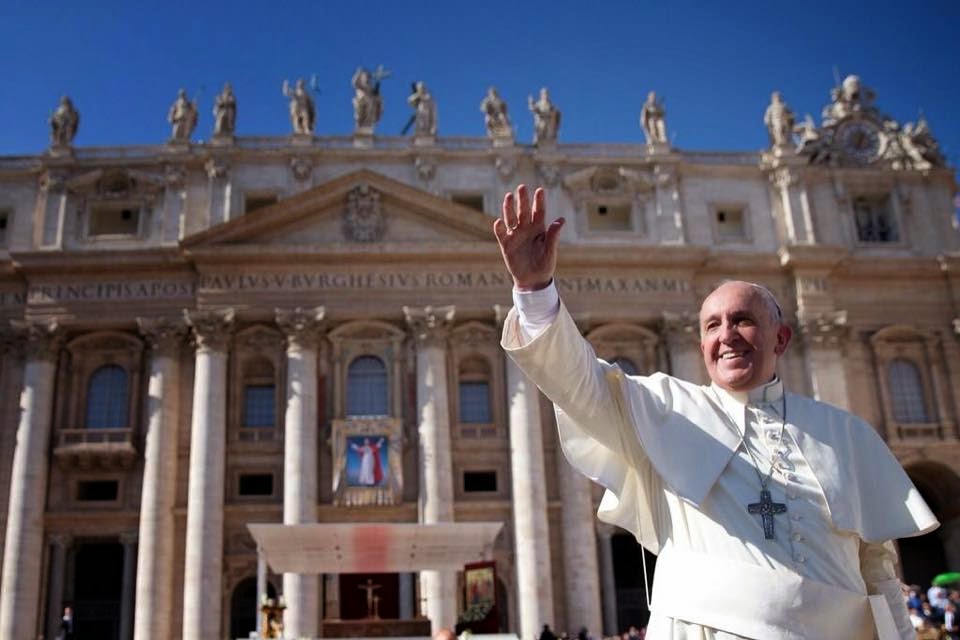 Posted by Jesus Caritas Est at 1:44 PM No comments:

What is Halloween? 5 Things to SHARE about this Christian Feast of All Saints.... #Halloween 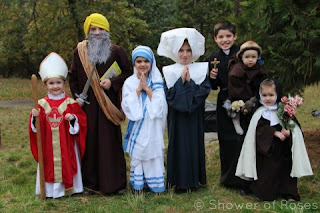 (IMAGE SOURCE; SHOWER OF ROSES BLOG)
Posted by Jesus Caritas Est at 9:59 AM No comments:

Pope Francis “Jesus draws close to us: his closeness is the real proof that.."


(Vatican Radio)  Pope Francis lamented the case of Christians who are so attached to the laws that they neglect the concepts of love and justice. His words came on Friday during his homily at the morning Mass celebrated in the Santa Marta residence.
Taking his cue from the day’s gospel reading where Jesus asked the Pharisees whether it was lawful to heal a sick person on the Sabbath, the Pope reflected on how love and justice are the path to Christ rather than an excessive attachment to the laws.  He reminded how Jesus described the Pharisees as hypocrites for criticizing him behind his back after he healed a sick man on the Sabbath.
“This way of life of being attached to the laws, distanced them from love and from justice.  They followed the laws and they neglected justice.  They followed the laws and they neglected love.  They were the models.  And for these people Jesus had only one word (to describe them): hypocrites. On one hand, you travel across the world looking for proselytes: you’re looking for them.  And then?   You close the door.  Closed-minded men, men who are so attached to the laws, to the letter of the law that they were always closing the doorway to hope, love and salvation… Men who only knew how to close (doors).”
Quoting from St Paul, Pope Francis said that the path towards being faithful to the laws, without neglecting justice and love is the opposite one:  from love to integrity, from love to discernment, from love to the laws.
“This is the path that Jesus teaches us, totally opposite to that of the doctors of law. And it’s this path from love and justice that leads to God.  Instead, the other path, of being attached only to the laws, to the letter of the laws, leads to closure, leads to egoism.  The path that leads from love to knowledge and discernment, to total fulfilment, leads to holiness, salvation and the encounter with Jesus.   Instead, the other path leads to egoism, the arrogance of considering oneself to be in the right, to that so-called holiness of appearances, right?   Jesus said to these people: You like to be seen by the people as men of prayer and of fasting…:’ To be seen, right?  And it’s for this reason that Jesus tells the people: “do what they tell you but do not do what they do.’”
The Pope said these are the two different paths and Jesus shows us the right one.
“Jesus draws close to us: his closeness is the real proof that we are proceeding along the true path.  That’s because it’s the path which God has chosen to save us: through his closeness.  He draws close to us and was made man.  His flesh, the flesh of God is the sign; God’s flesh is the sign of true justice.  God was made man like one of us and we must make ourselves like the others, like the needy, like those who need our help.”
Pope Francis said Jesus’ flesh is the bridge that brings us closer to God and not the letter of the law.   I hope, he concluded, that these examples of Jesus’s love and closeness can help us from sliding into hypocrisy because a hypocritical Christian is a really bad thing.
Posted by Jesus Caritas Est at 9:57 AM No comments: