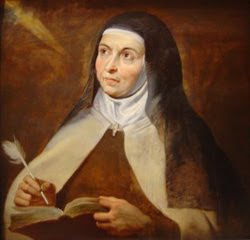 In the Autobiography which she completed towards the end of her life, Saint Teresa of Avila gives us a description of her parents, along with a disparaging estimate of her own character. "The possession of virtuous parents who lived in the fear of God, together with those favors which I received from his Divine Majesty, might have made me good, if I had not been so very wicked." A heavy consciousness of sin was prevalent in sixteenth-century Spain, and we can readily discount this avowal of guilt. What we are told of Teresa's early life does not sound in the least wicked, but it is plain that she was an unusually active, imaginative, and sensitive child. Her parents, Don Alfonso Sanchez de Capeda and Dona Beatriz Davila y Ahumada, his second wife, were people of position in Avila, a city of Old Castile, where Teresa was born on March 28, 1515. There were nine children of this marriage, of whom Teresa was the third, and three children of her father's first marriage.
Piously reared as she was, Teresa became completely fascinated by stories of the saints and martyrs, as was her brother Roderigo, who was near her own age and her partner in youthful adventures. Once, when Teresa was seven, they made a plan to run away to Africa, where they might be beheaded by the infidel Moors and so achieve martyrdom. They set out secretly, expecting to beg their way like the poor friars, but had gone only a short distance from home when they were met by an uncle and brought back to their anxious mother, who had sent servants into the streets to search for them. She and her brother now thought they would like to become hermits, and tried to build themselves little cells from stones they found in the garden. Thus we see that religious thoughts and influences dominated the mind of the future saint in childhood.
Teresa was only fourteen when her mother died, and she later wrote of her sorrow in these words: "As soon as I began to understand how great a loss I had sustained by losing her, I was very much afflicted; and so I went before an image of our Blessed Lady and besought her with many tears that she would vouchsafe to be my mother." Visits from a girl cousin were most welcome at this time, but they had the effect of stimulating her interest in superficial things. Reading tales of chivalry was one of their diversions, and Teresa even tried to write romantic stories. "These tales," she says in her Autobiography, "did not fail to cool my good desires, and were the cause of my falling insensibly into other defects. I was so enchanted that I could not be happy without some new tale in my hands. I began to imitate the fashions, to enjoy being well dressed, to take great care of my hands, to use perfumes, and wear all the vain ornaments which my position in the world allowed." Noting this sudden change in his daughter's personality, Teresa's father decided to place her in a convent of Augustinian nuns in Avila, where other young women of her class were being educated. This action made Teresa aware that her danger had been greater than she knew. After a year and a half in the convent she fell ill with what seems to have been a malignant type of malaria, and Don Alfonso brought her home. After recovering, she went to stay with her eldest sister, who had married and gone to live in the country. Then she visited an uncle, Peter Sanchez de Capeda, a very sober and pious man. At home once more, and fearing that an uncongenial marriage would be forced upon her, she began to deliberate whether or not she should undertake the religious life. Reading the

SOURCE http://www.ewtn.com/saintsHoly/saints/T/stteresaofavila.asp
Posted by Jesus Caritas Est at 8:52 AM No comments:

Memorial of Saint Teresa of Jesus, Virgin and Doctor of the Church
Lectionary: 468

Brothers and sisters:
I am not ashamed of the Gospel.
It is the power of God for the salvation of everyone who believes:
for Jew first, and then Greek.
For in it is revealed the righteousness of God from faith to faith;
as it is written, “The one who is righteous by faith will live.”

After Jesus had spoken,
a Pharisee invited him to dine at his home.
He entered and reclined at table to eat.
The Pharisee was amazed to see
that he did not observe the prescribed washing before the meal.
The Lord said to him, “Oh you Pharisees!
Although you cleanse the outside of the cup and the dish,
inside you are filled with plunder and evil.
You fools!
Did not the maker of the outside also make the inside?
But as to what is within, give alms,
and behold, everything will be clean for you.”
Posted by Jesus Caritas Est at 8:52 AM No comments: