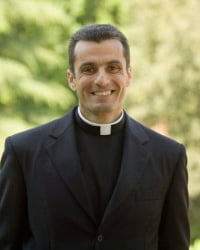 Fr Amin Abboud 1965-2013
"I am every day more convinced that happiness in Heaven is for those who know how to be happy on earth," - St Josemaria Escriva.
The words of the founder of Opus Dei, St Josemaria Escriva, could well have been in the thoughts of the many, many family, friends, colleagues, students and brother priests of Fr Amin Abboud when they attended his Requiem Mass today. They knew him to be happy - and holy. They also knew him to be intelligent, hard-working, good company  and a faithful son of the Prelature of Opus Dei.
Fr Amin was attending a spiritual retreat at Kenthurst Study Centre when he suffered a heart attack and died suddenly on 19th July.
Today they came in their thousands to St Mary's Cathedral for the Requiem Mass celebrated by His Excellency Most Rev. Paul Gallagher, Apostolic Nuncio in Australia and concelebrated by Most Rev. Antoine Tarabay, Maronite Bishop of Australia and Rev. Mgr. Victor Martinez, Regional Vicar of Opus Dei for Australia and New Zealand along with a number of Fr Amin's fellow Opus Dei priests and priests of the Sydney Archdiocese and  Parramatta Diocese.
At the beginning of the mass the Apostolic Nuncio told everyone present including Fr Amin's parents Phillip and Salma that the Holy Father sent his thoughts and prayers. 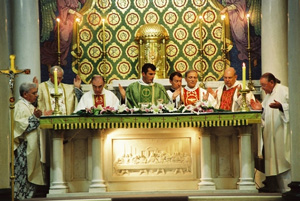 Fr Amin Abboud celebrating mass
Monsignor Victor Martinez, with whom Fr Amin, 48, worked in  the governance of Opus Dei in Sydney said in his homily that today was one of the hardest in his life.
He spoke of Fr Amin's studies to become a doctor, his great intellect, his decision to become a priest as well as his deep spirituality, energy, optimism and dedication in his pastoral work.
Fr Amin's parents grew up in North Lebanon, moving to Sydney in 1960 where they had four children, Fr Amin being the eldest.
Studying medicine at the University of Sydney, Fr Amin graduated with first class honours.
The message of Opus Dei captivated him because he saw that he could become holy through his work as a doctor. In January 1987 he met with the Prelate of Opus Dei, Bishop Alvaro del Portillo on his pastoral visit to Australia soon after which he joined Opus Dei. 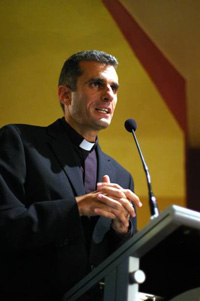 A man of deep spirituality and dedication to the Prelature of
Opus Dei
He studied philosophy and theology in Spain where he obtained a doctorate in contemporary philosophy in 2006 before being ordained a priest for the Prelature of Opus Dei on 27 May 2006 and returning to Australia the following year.
Cardinal George Pell, who knew Fr Amin well is currently in Rio de Janeiro for World Youth Day after leading a group of pilgrims to Peru.
However he sent the following message which was read by Monsignor Martinez:
"Naturally, it came as a great shock to us in Lima, Peru when we heard of the sudden death of Fr Amin Abboud. It was one of the last things we were expecting.
It is hard to see where the hand of God is in all this, because we might have expected Fr Amin's contribution to have continued for at least another 30 years.
We should pray for Fr Amin's soul, we should pray in thanks to the good God for Fr Amin's marvellous contribution.
We pray that all members of the work and all Fr Amin's family and friends will find consolation in their faith.
In a couple of my talks to the pilgrims I've mentioned Fr Amin, recounting his life story.
In God's eyes this story is now complete.
On both occasions I quoted an excerpt from the rule of St Benedict, "Run while you have the light of life, lest the darkness of death overtake you". 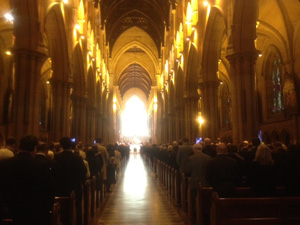 Thousands attend requiem Mass for Fr Amin Abboud in St Mary's Cathedral
May Fr Amin's life and death remind us to do now what we should be doing.
May he rest in peace." - Cardinal George Pell.
For his family and friends the quotation on the back of the prayer card for the repose of the soul of Fr Amin was not only something he lived but what he encouraged everyone to do -
"Don't let your life be barren, Be useful. Make yourself felt. Shine forth with the torch of your faith and your love.
"With your apostolic life, wipe out the trail of filth and slime left by the unclean sowers of hatred.
"And set aflame all the ways of the earth with the fire of Christ that you bear in your heart." - St Josemaria Escriva, The Way.

Shared from Archdiocese of Sydney
Posted by Jesus Caritas Est at 9:20 PM No comments:

Memorial of Saints Joachim and Anne, Parents of the Blessed Virgin Mary
Lectionary: 399

In those days:
God delivered all these commandments:

“I, the LORD, am your God,
who brought you out of the land of Egypt, that place of slavery.
You shall not have other gods besides me.
You shall not carve idols for yourselves
in the shape of anything in the sky above
or on the earth below or in the waters beneath the earth;
you shall not bow down before them or worship them.
For I, the LORD, your God, am a jealous God,
inflicting punishment for their fathers’ wickedness
on the children of those who hate me,
down to the third and fourth generation;
but bestowing mercy down to the thousandth generation
on the children of those who love me and keep my commandments.

“You shall not take the name of the LORD, your God, in vain.
For the LORD will not leave unpunished
him who takes his name in vain.

“Remember to keep holy the sabbath day.
Six days you may labor and do all your work,
but the seventh day is the sabbath of the LORD, your God.
No work may be done then either by you, or your son or daughter,
or your male or female slave, or your beast,
or by the alien who lives with you.
In six days the LORD made the heavens and the earth,
the sea and all that is in them;
but on the seventh day he rested.
That is why the LORD has blessed the sabbath day and made it holy.

“Honor your father and your mother,
that you may have a long life in the land
which the LORD, your God, is giving you.

“You shall not kill.

“You shall not commit adultery.

“You shall not steal.

“You shall not bear false witness against your neighbor.

(Vatican Radio) Pope Francis joined hundreds of thousands of young people for a lively song and prayer fest on Rio de Janeiro’s famous Copacobana beach on Thursday. It was his first official encounter with young people as part of World Youth Day celebrations in Brazil.
Our correspondent,
It would have been easy (and, I admit, it was tempting) to draw comparisons between the sea of young people and the ocean of water beside which they were gathered, to compare the roar of the waves with the waving, roaring crowd – and to make the inevitable links with biblical symbols involving water, seas…and fishermen.
It would have been enlightening (if you like that sort of thing) to concentrate on the numbers, which were certainly impressive: 175 countries, 1,000 Bishops, 300 performers and, most important of all, over a million people…not all of them young.
It would have been entertaining (but unnecessary) to search for superlatives with which to describe Pope Francis’ first encounter with young people from every corner of the globe during the so-called welcoming celebration that effectively marks the first of main World Youth Day events…and his own first WYD.
It would have been excessive (and repetitive) to complain about the rain, yet again… and to describe how the weather blew out the communications links for several interminable minutes.
It would have been instructive (and important) to comment on each of the improvised additions Pope Francis made to his prepared discourse: “Young people are stronger than the rain”, he said…”Benedict is watching you, he accompanies us with his prayers”, he confided…”Faith revolutionizes our lives”, he stressed…
Doubtless, all this would have guaranteed a much more interesting correspondent’s report – but it wouldn’t have communicated any of the beauty and the poetry of the occasion, the sounds and the colours, the songs and the choreographies, the expressions of Pope Francis as he drove through the throng exchanging gestures, emotions, and even his zucchetto. Unfortunately, there are limitations to being a correspondent and to writing reports. I hope you understand.


POPE FRANCIS ON BEACH WITH YOUTH

POPE FRANCIS AT APARECIDA IN WYD

Posted by Jesus Caritas Est at 5:40 PM No comments: