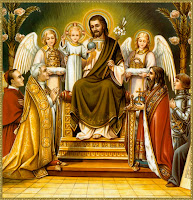 Posted by Jesus Caritas Est at 11:40 AM No comments:

IN HONOR OF THE YEAR OF FAItH - JCE NEWS WILL BE SHOWING SOME OF THE TOP CATHOLIC MOVIES OF ALL TIME. TUNE IN FOR THE NEXT PART OF ST. JOHN BOSCO- TOMORROW

ASIA NEWS REPORT
by Nirmala Carvalho
The jury chose Sima Samar, a former Afghan president, and Mala Yousufzai, a 15-year-old girl who survived a Taliban attack. Both have put their lives on the line to defend women's rights.

Mumbai (AsiaNews) - The 2012 edition of the Mother Teresa Memorial International Award for Social Justice conferred by the Harmony Foundation went to Sima Samar, a former Afghan vice president, and Mala Yousufzai, the 15-year-old Pakistani girl attacked by the Taliban for her commitment to women's rights. The teenager is presently hospitalised in Birmingham, Great Britain, after she was shot in the head on 9 October by Muslim extremist.

Harmony Foundation President Abraham Mathai said the two women were chosen for their courage, for putting their lives on the line for an ideal.

Sima Samar was recognised for her work in the field of women's rights, education and emancipation. After the Taliban's takeover of Afghanistan, she fled to Pakistan where she worked for 20 years to raise awareness about the plight of Afghan women. After the theocratic regime was overthrown, she became the most prominent woman in the country. Currently, she is in charge of the Afghan Independent Human Rights Commission (AIHRC).

Malala Yousufzai is a teenager who was chosen for a special jury award in recognition of her courage and her determination to fight against discrimination against Pakistani girls in the Swat Valley, where the Taliban have imposed Sharia.

From Great Britain, Malala's father, Ziauddin Yousufzai, sent a touching letter on his daughter's behalf thanking the Harmony Foundation for the award. "This means a lot to us," he writes, "especially during our time of crisis. Honouring Malala with this award sends out a strong message of support to those whose daughters have to fight and speak out for their basic right to education."

A special national awards were given to Nayyar Kuldeep, a famous Indian writer, for his contribution to India-Pakistan peace efforts; to Vinay Shetty, for furthering the cause of blood donation; Flavia Agnes, a lawyer, for her commitment to women's rights and fight against domestic violence; Gujarat police officer Sanjeev Bhatt, for his efforts in favour of communal dialogue; and the Shillong Chamber Choir for promoting national integration through music. The Pandita Ramabai Mukti Mission was also recognised for its work towards empowerment of women.

In October 2005, Abraham Mathai founded the Harmony Foundation to promote the idea of peace, dialogue and help for all communities without distinction of religion, caste, creed, gender or region.

In 2007, the Foundation established the Mother Teresa Memorial International Awards for Social Justice in honour of Mother Teresa of Calcutta.
SHARED FROM ASIA NEWS IT
Posted by Jesus Caritas Est at 11:27 AM No comments:

SHARED FROM IND. CATH. NEWS
Posted by Jesus Caritas Est at 11:25 AM No comments:

Agenzia Fides REPORT- Thanks to the program called Llachay, which aims to give back the rights of street children and adolescents who live in situations at risk, 6,365 children throughout Peru will be taken care of until 2013.
The government initiative started from Lima and Iquitos where the problem is particularly serious. In 2013, the program will start in Arequipa, Ica, Cusco, Chincha, Abancay, Juliaca, Huanuco, Huancavelica, Pasco, Ayacucho, Moquegua and Tacna. The government, thanks to this initiative, aims to strengthen the commitment of parents in the education of their children and provide financial contributions to make it possible for families to start small activities that allow them to survive. In addition, if the children do not know where to go after school, there are reception centers where they can do their homework until their parents finish work. Llachay will offer sports scholarships and vocational formation, will distribute school kits, materials for starting small businesses, shelter homes, free legal assistance. (AP) (Agenzia Fides 28/11/2012)
Posted by Jesus Caritas Est at 11:24 AM No comments:

THE Archdiocesan Office for Youth has prepared an Advent resource called We Wait With Joy, to assist young people enter more deeply into the season of Advent.

The resource is suitable for both individuals and youth groups and contains the Gospel readings and some reflection questions for each day of Advent. Each Sunday also includes some prayers that can be used during Mass or a group prayer time. There are also additional sections that people may find interesting or useful in helping them prepare for Christmas.


SHARED FROM ARCHDIOCES
Posted by Jesus Caritas Est at 11:23 AM No comments:

Posted by Jesus Caritas Est at 11:22 AM No comments:

Posted by Jesus Caritas Est at 11:19 AM No comments: