#PopeFrancis “Even the person with disabilities and frailties – physical, mental or moral - must be able to participate in the life of society and be helped...,” Text + Video 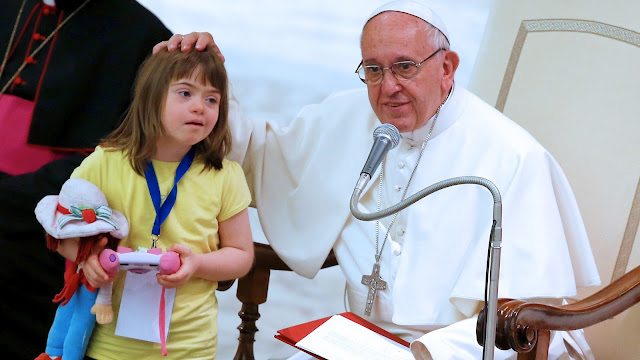 (Vatican Radio) Pope Francis on Saturday encouraged the Comunità di Capodarco in its work to help the disabled and marginalized people of society.

The community was founded in 1966 in the Capodarco neighborhood of the eastern Italian city of Fermo.Its main activity is organizing services for the rehabilitation of disabled people, with a particular aim of social and occupational integration. Over the years, its sphere of action expanded to helping young people, children, drug addicts, immigrants, the mentally ill, and other populations on the peripheries of society.
“The Comunità di Capodarco, existing in numerous local chapters, celebrated its 50th anniversary last year,” – Pope Francis told them – “With you, I thank the Lord for the good accomplished during these years … You have chosen to be on the side of people who are less protected; to offer them hospitality, support and hope, in a dynamic of sharing. In this way, you have contributed and contribute to making a better society.”
The Holy Father said the quality of life within a society is measured from the ability to include its weakest members, “effectively respecting their dignity as men and women,” adding this inclusion should be seen “not as something extraordinary, but normal.”
“Even the person with disabilities and frailties – physical, mental or moral - must be able to participate in the life of society and be helped to implement his or her potential in different ways,” – the Pope continued – “A society that would give space only to people who are fully functional - completely autonomous and independent - would not be a society worthy of man. Discrimination based upon efficiency is no less deplorable than that based upon by race, religion, or ability to pay.”
Pope Francis praised the Comunità di Capodarco for not approaching those who are weaker with a “pietistic attitude” or as if they were welfare cases, but by promoting the “protagonism of the person.”
“In the face of economic problems and the negative consequences of globalization, your community is trying to help those who find themselves being tested not to feel excluded or marginalized; but, on the contrary, to walk at the forefront, carrying the witness of personal experience,” – the Pope said – “This promotes the dignity and respect of each individual, making the ‘losers of life’ feel the tenderness of God, loving Father of all of his creatures.”
The Holy Father also said those marked by physical or mental impediments have a special place in the Church, and their participation in the ecclesial community “opens the way to simple and fraternal relations, and their filial and spontaneous prayer invites all of us to pray to our Heavenly Father.”
Posted by Jesus Caritas Est at 5:34 PM No comments: 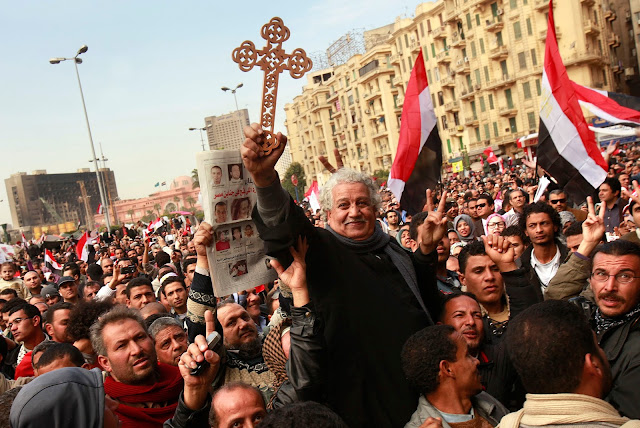 Sinai, Coptic Christian killed with a bullet to the neck, third victim in two days

The Coptic minority is being targeted by local cells of the Islamic state. The murder took place yesterday in Al-Arich. The man's house was set on fire. Previously a 60 year old Christian and son were killed; the young man was burnt alive. Daesh announces new attacks on social networks.
Posted by Jesus Caritas Est at 8:21 AM No comments: 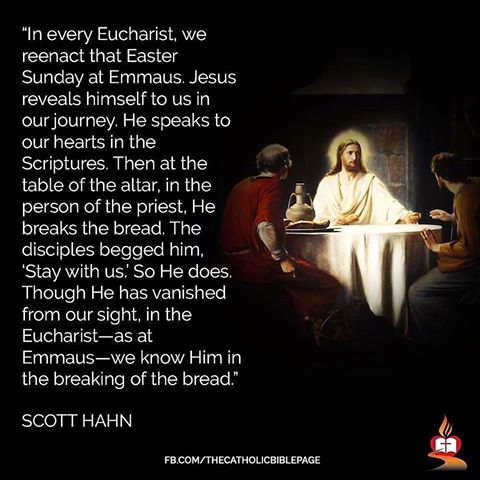 Saturday of the Seventh Week in Ordinary Time
Lectionary: 346

God from the earth created man,
and in his own image he made him.
He makes man return to earth again,
and endows him with a strength of his own.
Limited days of life he gives him,
with power over all things else on earth.
He puts the fear of him in all flesh,
and gives him rule over beasts and birds.
He created for them counsel, and a tongue and eyes and ears,
and an inventive heart,
and filled them with the discipline of understanding.
He created in them knowledge of the spirit;
With wisdom he fills their heart;
good and evil he shows them.
He put the fear of himself upon their hearts,
and showed them his mighty works,
That they might glory in the wonder of his deeds
and praise his holy name.
He has set before them knowledge,
a law of life as their inheritance;
An everlasting covenant he has made with them,
his justice and his judgments he has revealed to them.
His majestic glory their eyes beheld,
his glorious voice their ears heard.
He says to them, "Avoid all evil";
each of them he gives precepts about his fellow men.
Their ways are ever known to him,
they cannot be hidden from his eyes.
Over every nation he places a ruler,
but God's own portion is Israel.
All their actions are clear as the sun to him,
his eyes are ever upon their ways.

People were bringing children to Jesus that he might touch them,
but the disciples rebuked them.
When Jesus saw this he became indignant and said to them,
"Let the children come to me; do not prevent them,
for the Kingdom of God belongs to such as these.
Amen, I say to you,
whoever does not accept the Kingdom of God like a child
will not enter it."
Then he embraced the children and blessed them,
placing his hands on them.
Posted by Jesus Caritas Est at 8:07 AM No comments: 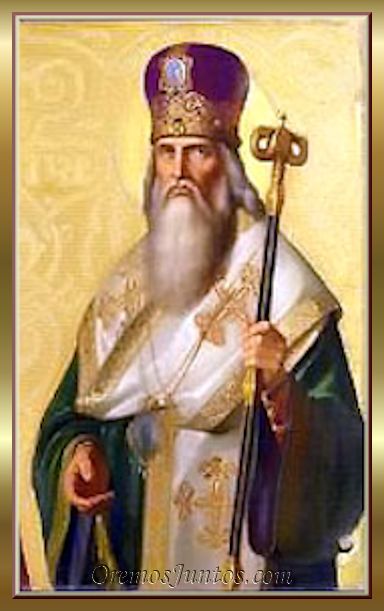 Patriarch of Constantinople, date of birth unknown; died 25 February, 806.
He was the son of the Patrician and Prefect of Constantinople, George, and his wife Eukratia, and entered the service of the State. In 784 when Paul IV Patriarch of Constantinople died Tarasius was an imperial secretary, and a champion of the veneration of images. It may be that before his death the patriarch had recommended Tarasius as his successor in the patriarchate to the Empress Irene who was regent for her son Constantine VI (780-797). After the burial of Paul IV a great popular assembly was held before the Magnaura Palace to discuss the filling of the vacant see. The empress delivered an oration on the new appointment to the patriarchate and the people proclaimed Tarasius as the most worthy candidate. The empress agreed but said that Tarasius refused to accept the position. Tarasius now made a speech himself in which he declared he felt himself unworthy of the office, further that the elevation of a layman was very hazardous, and that the position of the Church of Constantinople had become a very difficult one, as it was separated from the Catholics of Western Europe and isolated from the other Oriental patriarchates; consequently he would only be willing to accept the position of patriarch on condition that Church unity be restored and that, in connection with the pope, an oecumenical council be called. The majority of the populace approved of these views and the imperial Court agreed to it. So on 25 December, 784, Tarasius was consecrated patriarch. In 785 he sent the priest George as his legate to Hadrian I with a letter in which he announced his appointment. In his reply the pope expressed his disapproval of the elevation of Tarasius directly from the laity to the dignity of a bishop contrary to canonical regulation, but allowed clemency to rule in view of the orthodoxy of the new patriarch's views, and recognized him as patriarch. After this by joint action with the pope and the imperial Court Tarasius called the Second Council of Nicaea, the Seventh Ecumenical Council, which rejected Iconoclasm. Union with the Roman Church was restored.
After the synod the patriarch had a number of struggles not only with the Iconoclastic party of the capital but also with a party of Orthodox monks. First, the latter upbraided him for restoring to office the bishops who had formerly maintained Iconoclasm, but who had submitted to the decrees of the Council of 787. As, however, this was in accordance with the decrees of the council the accusation was allowed to drop. Another accusation was much more serious, namely, that Tarasius tolerated and encouraged simony, because those bishops who had given money to obtain their positions were only commanded by him to do a year's penance and were permitted to retain their offices. The patriarch defended himself in writing against this accusation which he denied in toto; moreover, he issued a severe synodal letter against Simonists. The monks, however, were not satisfied; they maintained their accusations and also attacked the Council of 787. At a later date Theodore of Studium, who took part in these disputes, changed his opinion of Tarasius, and also of the Second Council of Nicaea, the oecumenical character of which he acknowledged. Many serious difficulties still existed in regard to Western Europe. There were also fresh disputes in Constantinople when the Emperor Constantine VI put aside his lawful wife and wished to marry Theodata, a relative of Abbot Theodore of Studium. Tarasius positively refused to perform the second marriage and expressed his displeasure at the conduct of the priest Joseph who had married the emperor. The zealous monks, whose leaders were the Abbots Plato of Saccudium and Theodore of Studium, accused the patriarch of weakness, because he took no further steps against the emperor. They refused to have Church fellowship any longer with Tarasius, and were, consequently, violently persecuted by the emperor who, however, also treated the patriarch harshly. After Irene had dethroned Constantine in 797, Tarasius deposed the priest Joseph and peace was once more restored between the patriarch and the monks. (See THEODORE OF STUDIUM). In 802 Tarasius crowned as emperor Nicephorus, who had overthrown Irene, an act that greatly dissatisfied the populace. The patriarch had nothing to do with the intrigues of the court. His life was ascetic and simple, he checked the luxury of the clergy, preached with great zeal, and was very benevolent to the poor. After his death he was venerated as a saint. His name is also placed in the Roman Martyrology under the date of 25 February. Catholic Enclopedia
Posted by Jesus Caritas Est at 7:52 AM No comments: