#BreakingNews over 120 Christians Kidnapped in Syria by Terrorists - Please PRAY 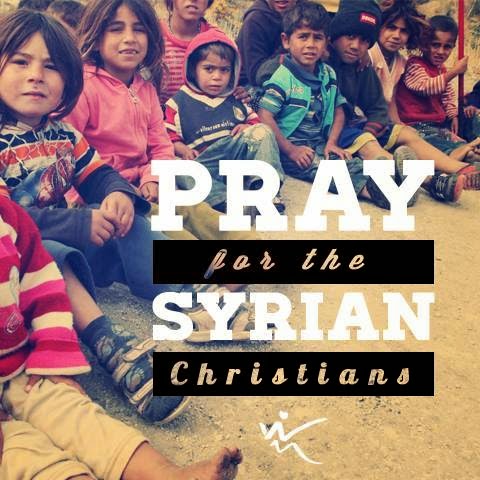 Hassakè (Agenzia Fides) - There are between 120 and 140 Assyrian Christians held hostage by jiahdists of the Islamic State who in the night between Sunday 22 and Monday, February 23 launched a large-scale attack against the Christian villages scattered along the banks of the river Khabur, in the Syrian province in northeastern Jazeera. This was confirmed to Agenzia Fides by Archbishop Jacques Behnan Hindo, ordinary of the Syrian Catholic Archieparchy in Hassaké-Nisibis. The hostages all belong to the villages of Tel Jazira, Tel Shamiram and Tel Gouram. "The jihadists - refers Archbishop - have taken full control of the villages on the western shore of Khabur, while yesterday afternoon, February 24, all the inhabitants of 22 villages scattered along the eastern shore were evacuated and more than a thousand Christian Assyrian and Chaldean families fled to the major centers of Hassaké, Qamishli, Dirbesiye and Ras al-Ayn". The offensive of the jihadists of the Islamic State has so far caused the death in combat of 4 Christians enrolled in the Assyrian militia - deployed with Kurdish battalions against the militia of Is - while at the moment, according to Assyrian sources, a young Christian Assyrian named Milad appears to be the only civilian victim of the Islamists. According to the Syrian Catholic Archbishop, the jihadists have launched an offensive in the region of the Khabur to find new spaces and escape routes. According to Mgr. Hindo even countermoves proposed by some foreign Countries before the recent military strategies of the Islamic State confirms the serious responsibilities of the West in triggering conflicts that are destroying the Middle East. "With their disastrous policies - the Archbishop explains to Fides - mainly the French and the US, with their regional allies, have favored in fact the Daesh escalation. Now they persevere in error, commit strategic, grotesque mistakes such as the announcement of the 'spring campaign' to liberate Mosul and insist on interfering with irrelevant interventions, instead of recognizing that their guaranteed support to jihadist groups has led us to this chaos and has destroyed Syria, making us regress 200 years". (GV) (Agenzia Fides 25/02/2015)
According to AsiaNews : Since the beginning of the uprising against Syrian President Bashar al Assad in 2011, more than 3.2 million people have fled the country whilst another 7.6 million are internally displaced. At least 200,000 people have been killed in the fighting, many of them civilians.

Posted by Jesus Caritas Est at 11:15 AM No comments: 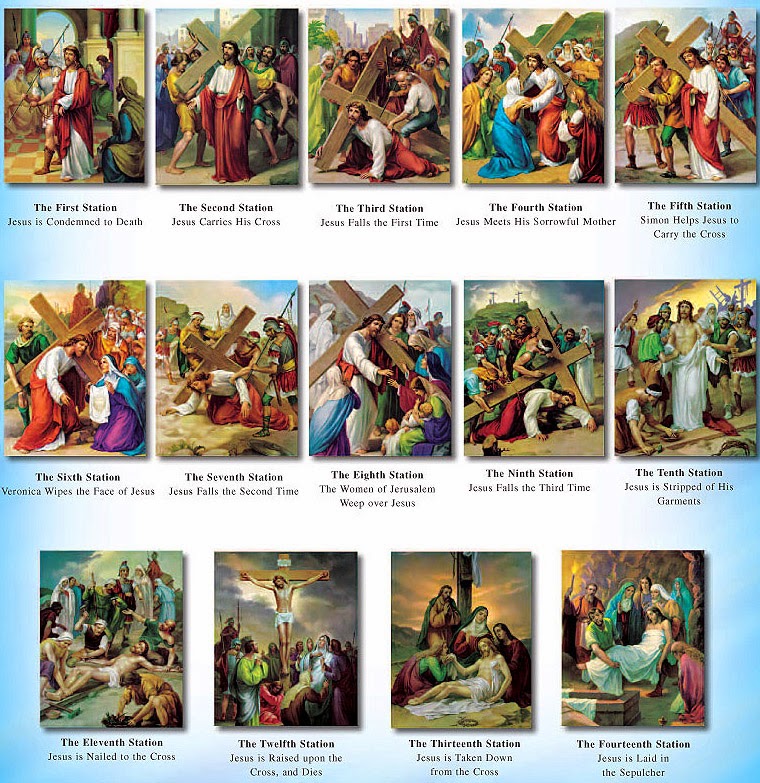 Stations of the Cross (or Way of the Cross; in Latin, Via Crucis; also called the Via Dolorosa) are artistic representations, showing Christ Carrying the Cross to His crucifixion. Many Roman Catholic churches have Stations of the Cross, placed at along the side walls of the Church. The tradition of moving around the Stations to commemorate the Passion of Christ began with St. Francis of Assisi. Some Lutherans and Anglicans also observe the practice. Lent, the 40 days before Easter, is when the "Stations" are typically prayed but it can be said any time through the year. In Jerusalem this is known as the "Via Sacra", or a specific way along which pilgrims walk meditating on the Lord's walk to His crucifixion. In the past the number of stations varied between seven and thirty; seven was common.  In 1731, Pope Clement XII extended to all churches the right to have the stations and adjusted them to fourteen.  Pope John Paul II referred to Acts of Reparation as the "unceasing effort to stand beside the endless crosses on which the Son of God continues to be crucified".
At each Station, the Our Father, Hail Mary, and Glory Be are prayed.
Also the faithful often bend the knee saying "We adore you o Christ and praise you because by your Holy Cross you have redeemed the world." The Church provides an Indulgence for the 14 Stations.
14 pictures or sculptures depicting the following scenes:

Posted by Jesus Caritas Est at 10:51 AM No comments:

Latest from #Vatican News and #PopeFrancis - Clarification on Mexicanisation and End of Life Assistance... 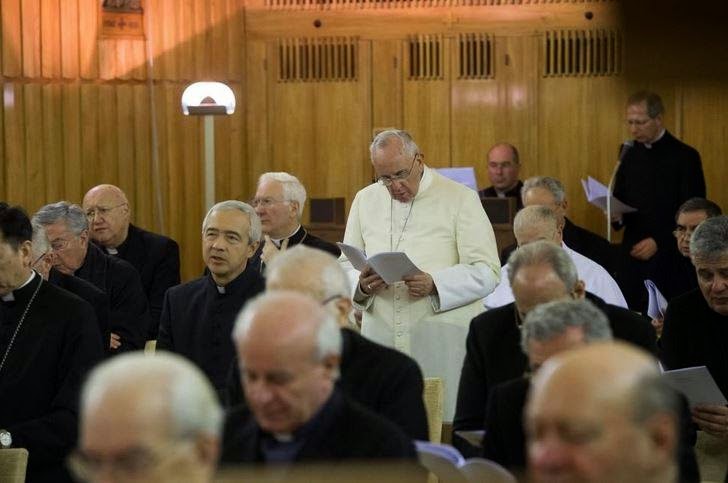 Posted by Jesus Caritas Est at 9:06 AM No comments: 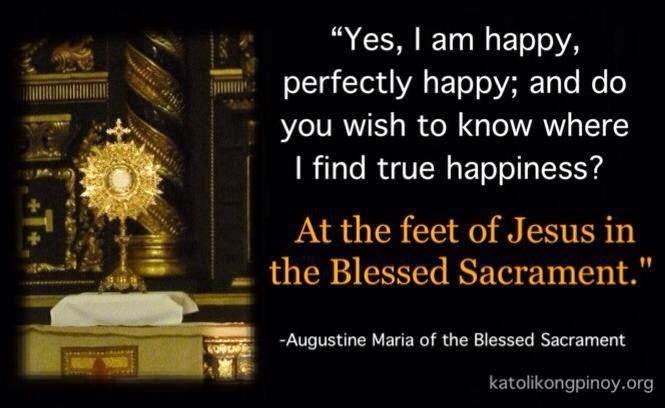 Lenten Weekday
First Reading
Jonah 3:1-10 1Then the word of the LORD came to Jonah the second time, saying,2"Arise, go to Nin'eveh, that great city, and proclaim to it the message that I tell you."3So Jonah arose and went to Nin'eveh, according to the word of the LORD. Now Nin'eveh was an exceedingly great city, three days' journey in breadth.4Jonah began to go into the city, going a day's journey. And he cried, "Yet forty days, and Nin'eveh shall be overthrown!"5And the people of Nin'eveh believed God; they proclaimed a fast, and put on sackcloth, from the greatest of them to the least of them.6Then tidings reached the king of Nin'eveh, and he arose from his throne, removed his robe, and covered himself with sackcloth, and sat in ashes.7And he made proclamation and published through Nin'eveh, "By the decree of the king and his nobles: Let neither man nor beast, herd nor flock, taste anything; let them not feed, or drink water,8but let man and beast be covered with sackcloth, and let them cry mightily to God; yea, let every one turn from his evil way and from the violence which is in his hands.9Who knows, God may yet repent and turn from his fierce anger, so that we perish not?"10When God saw what they did, how they turned from their evil way, God repented of the evil which he had said he would do to them; and he did not do it.
Responsorial Psalm
Psalms 51:3-4, 12-13, 18-19 1Have mercy on me, O God, according to thy steadfast love; according to thy abundant mercy blot out my transgressions. 2Wash me thoroughly from my iniquity, and cleanse me from my sin! 10Create in me a clean heart, O God, and put a new and right spirit within me. 11Cast me not away from thy presence, and take not thy holy Spirit from me. 16For thou hast no delight in sacrifice; were I to give a burnt offering, thou wouldst not be pleased. 17The sacrifice acceptable to God is a broken spirit; a broken and contrite heart, O God, thou wilt not despise.
Gospel
Luke 11:29-32
29When the crowds were increasing, he began to say, "This generation is an evil generation; it seeks a sign, but no sign shall be given to it except the sign of Jonah. 30For as Jonah became a sign to the men of Nin'eveh, so will the Son of man be to this generation. 31The queen of the South will arise at the judgment with the men of this generation and condemn them; for she came from the ends of the earth to hear the wisdom of Solomon, and behold, something greater than Solomon is here. 32The men of Nin'eveh will arise at the judgment with this generation and condemn it; for they repented at the preaching of Jonah, and behold, something greater than Jonah is here.
Posted by Jesus Caritas Est at 8:46 AM No comments:

The Chinese Church mourns Fr. Ye Yaomin, who died aged 105. He spent 25 years doing hard laborHe was the oldest priest in the country. On his deathbed he prayed that new vocations for the local church flourish and condemned hate, which "is always a sin." Catholic sources tell AsiaNews: "He was the last of the 'elder' priests, ordained before the advent of Mao. They had kept the faith and dignity intact."
Guangzhou (AsiaNews) - China's oldest priest, Fr. Philip Ye Yaomin, died "peacefully, praying for the Church, for a flowering of vocations and rejecting hatred. He was the last of the 'elders', the priests ordained before the advent of Mao Zedong, who despite persecution had kept intact both faith and dignity".  This is how a Catholic source Guangzhou remembers Fr. Ye speaking toAsiaNews.  They priest had lived in the region for a long period before he died on 21 January at the age of 105.
His life was described as "epic" and ranged from the fall of the Chinese Empire to the civil war, and  the regime of the Communist Party intolerant of his strong faith.  On meeting him in 2007 in the Cathedral of Guangzhou, capital of the rich southern province of Guangdong, Fr. Ye recalled with a smile the period of the Cultural Revolution: "I was buried alive for a day and a night. Thank God that my faithful managed to stick a bamboo to help me breathe in the ground!".
For his final days Fr. Ye chose the Church of the Immaculate Conception of Foshan, his hometown. UCAN news agency spoke to the nun who cared for him in recent decades, Chen Jianyin, who says: "In recent times he had decided to refuse hospital treatment and food. He seemed aware of the imminence of his end. He told us that the Church was his home and he wanted to die at home. For this reason his parishioners have taken him to the Immaculate Conception, where he died".

Born in 1910 and baptized with the name of Philip, at age 27 Fr. Ye went to Hong Kong to study at the Major Seminary of Southern China. He remained there for seven years, until the end of World War II, then to returned to Guangzhou. He was ordained priest in 1948, and the year after faced the advent of the Communist Party who were determined to quell the Catholic Church.

In 1955 he was reported for "illegal possession of foreign material", a newsletter sent by old seminary classmates still in Hong Kong (at the time still in the hands of Great Britain). He was sentenced to live and work on a pig farm in the province of Qinghai, where he remained until 1980. Recalling those days, Fr. Ye used to say: "Never hate because hate is a sin."
Shared from AsiaNews IT
Posted by Jesus Caritas Est at 8:02 AM No comments: