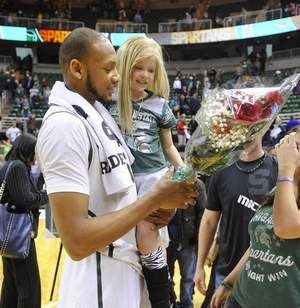 Lacey Holsworth, 8 year old, was the friend MSU Star Basketball player Adreian Payne, 23. They met in hospital 2 years ago and she attended his games. Lacey has passed away after a long battle with cancer. The little girl, from St. Johns, Michigan, she was diagnosed with neuroblastoma, cancer. Her parents said, 'She now dances among angels. 'Lacey is my special friend and she's a good sister to me,'  Michigan State star Payne, told BTN. 'She has taught me to fight through everything, to always have a smile on my face even when things are wrong.'
FOR BREAKING NEWS AND INSPIRATIONAL STORIES AND FREE MOVIES  LIKE US ON FACEBOOK NOW http://www.facebook.com/catholicnewsworld   He called her Princess Lacey. Doctors discovered two tumors - one in her abdomen and another around her spine. Payne's own mother passed away in his arms when he was 13. Payne had said he just wanted to bring Lacey happiness so she can forget her pain for a little while. 'It can't be all about you,' Payne said. 'That’s true with your teammates. What can you do to help make them better? And it’s true with others you meet. 'It's more important to have a role in other people's lives that you care for.' 'She calls me her "Superman", but she’s the one who's got the super strength,' Payne said.
Posted by Jesus Caritas Est at 6:16 PM No comments:

Pope Francis "put down your arms, end the violence! No more war! No more destruction.”

(Vatican Radio) Pope Francis expressed his profound pain over the “brutal killing” of the Dutch Jesuit Priest Father Frans van der Lugt in Syria and called for an end to the conflict there. His appeal came at the end of his Wednesday general audience.Speaking in Italian, Pope Francis said the victim had always carried out good works for everybody and because of this “was admired by both Christians and Moslems.” “His brutal killing filled me with profound pain and made me think again of the many people who suffer and die in that tortured country, my beloved Syria, which has already for far too long been gripped by bloody conflict, which continues to mete out death and destruction. I’m also thinking of the many people kidnapped, Christians and Moslems, Syrians and those from other countries, who include bishops and priests.”The Pope also appealed once again for peace in the war-torn country. “From my heart, I ask you all to join with my prayer for peace in Syria and in the region, and I send a concerned appeal to those responsible in Syria and to the international community: put down your arms, end the violence! No more war! No more destruction.” He also urged that human rights be respected in Syria and that those in need be given humanitarian assistance. Aged 75, Father van der Lugt had been living in Syria for many decades. He was beaten and shot dead by gunmen in the city of Homs on Monday.
Text from Vatican Radio website
Posted by Jesus Caritas Est at 4:38 PM No comments:

Pope Francis "Let us ask Our Lady, who is the Seat of Wisdom, for this gift." 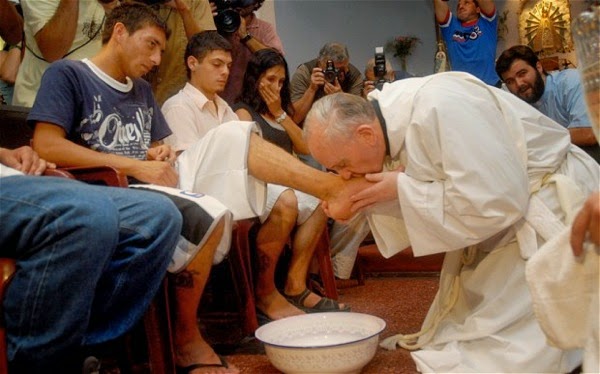 (Vatican Radio) The Holy See Press Office has announced that Pope Francis will celebrate the In Coena Domini mass on Holy Thursday at a residential rehabilitation centre for disabled people run by the Don Carlo Gnocchi Foundation in Rome. Known as the St. Mary of Providence Centre, it has 150 beds for patients suffering from disabilities or requiring rehabilitation because of neuro-motor impairments. Last year, Pope Francis celebrated the In Coena Domini Mass at a Rome prison for juvenile offenders.
Text from Vatican Radio website
Posted by Jesus Caritas Est at 10:03 AM No comments: 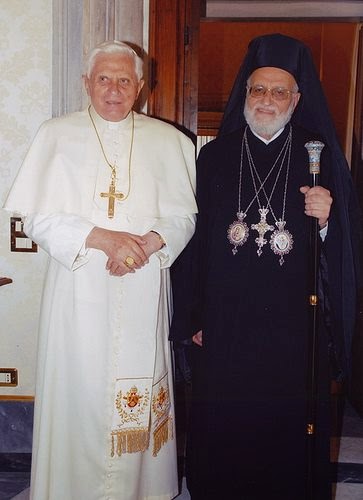 Baghdad (Agenzia Fides) - Cardinal Emmanuel III Delly, Patriarch emeritus of Babylon of the Chaldeans died in a hospital in San Diego (California). He was 87 years old. The news was given by sources of the Chaldean Church. "Cardinal Delly", says to Fides the current Chaldean Patriarch, Raphael Louis Sako I, "served the Chaldean Church for more than 60 years with dedication, first as a priest and then as Bishop and as Patriarch. He suffered moments of difficulty: the revolution in 1958; the wars in the last decades; the persecution of Christians followed by the invasion of the U.S.A.. In all this time he remained loyal to his country and to his people, he did not abandon his flock, he remained with his faithful, praying, helping, encouraging them".In the coming days a solemn requiem mass for Cardinal Delly will also be celebrated in the St. Joseph Chaldean Cathedral in Baghdad. The funeral will most likely take place in the United States. The majority of the Patriarch emeritus’ relatives moved to the U.S.A., and many of them live in Detroit.Patriarch emeritus Delly was born in Telkaif, Archeparchy of Mosul of the Chaldeans on September 27, 1927. He graduated in theology at the Pontifical Urbaniana University and canon law at the Pontifical Lateran University. He was ordained a priest on December 21, 1952 by Cardinal Pietro Fumasoni Biondi in Rome, at the Pontifical Urban College of Propaganda Fide, he returned to Baghdad as secretary of the Patriarch on December 30, 1960. He was elected to the titular Church of Paleopoli of Asia on December 7, 1962 and appointed Auxiliary of Patriarch Paul II Cheikho, receiving episcopal ordination on April 19, 1963. Since that year, as Bishop, he became a member of the Second Vatican Council. In October 2002 he resigned as Auxiliary Bishop for age limit, but a year later, on December 3, 2003, he was elected by the Chaldean Bishops as the Patriarch of Babylon, while Iraq was going through a terrible time in history, after the U.S.-led military intervention led to the fall of Saddam Hussein’s regime. During his patriarchal ministry, in August 2004, there were bloody attacks against churches in Baghdad and Mosul. (GV) (Agenzia Fides 09/04/2014)
Pope's Condolences from Vatican Release:

(Vatican Radio) Pope Francis has expressed his condolences for the death of Cardinal Emmanuel III Delly, who led the Chaldean Catholic Church from 2003 to 2012. Aged 87, he died on April 9 in a San Diego hospital. Born in 1927, Cardinal Delly was ordained to the priesthood in 1952 and the episcopate in 1963. In October 2003 he was elected patriarch of the Chaldean Catholic Church, and Pope Benedict XVI named him a cardinal in 2007.In a telegramme adddressed to the current Patriarch, Louis Raphael I Sako, and signed by Pope Francis and by Vatican Secretary of State, Cardinal Pietro Parolin, the Pope recalled “with deep gratitude” the late Patriarch’s dedication to his people and to the promotion of inter-religious dialogue.Please find below the full text of the telegramme:To: His Beatitude Louis Raphaël I SakoPatriarch of Babylon of the ChaldeansI was deeply saddened to hear of the death of His Beatitude Cardinal Emmanuel III Delly, Patriarch Emeritus of Babylon of the Chaldeans. I offer you, the clergy, men and women religious and lay faithful of the Patriarchate, both in Iraq and in the diaspora, my condolences and the assurance of my prayers. I recall with deep gratitude the late Patriarch’s dedication to his people and to the promotion of respectful, just and peaceful relations with followers of other religious traditions. I join you and all who mourn the passing of this esteemed Pastor in commending his noble soul to the infinite mercy of God our loving Father, and I cordially impart my Apostolic Blessing as a pledge of peace and hope in the Lord.FRANCISCUS PP.I offer you, your brother Bishops and the entire Church in Iraq my heartfelt sympathy on the passing of His Beatitude Cardinal Emmanuel III Delly. I pray that the Lord whom he served with fidelity will grant him eternal rest.Cardinal Pietro ParolinSecretary of State
Text from Vatican Radio website
Posted by Jesus Caritas Est at 9:38 AM No comments:

View funeral details
Fr Byrne was born on 11 December 1926, and educated at Our Lady of Victories, Camberwell and St Kevin’s College, Toorak. In 1945 he commenced his studies for the priesthood at Corpus Christi College and was ordained by Archbishop Mannix on 21st July 1952.
Following his ordination, Fr Byrne served as Assistant Priest at Healesville (1952), West Brunswick (1953-1955), Geelong North (1955-1956), Ormond (1956), and as Catholic Chaplain to the Repatriation Hospital Heidelberg (1956-1969), finally becoming Parish Priest of Oakpark in 1970 until his retirement as Pastor Emeritus in 2002.
Fr Byrne was a dedicated, determined and devoted priest.
I am sure the preacher at his Requiem Mass will reflect upon Fr Byrne’s strong convictions concerning catechesis and his commitment to the formation of young Catholics through his establishment of the St Michael the Archangel Youth Group Oakpark.

Fr Byrne was always keen to remind others, that he saw the potential of engaging young Catholics with the phenomena of World Youth Day, long before it became a feature of diocesan and international Catholic life.
He was a man of deep faith, who expressed little doubt about the place of the Church, the sacraments, Our Lady and prayer in the lives of those he served.
In his retirement Fr Byrne became a student at John Paul II Institute for Marriage and the Family, continued to supply Mass and to enjoy the company of his loyal lay and priest friends in whom he found great support and spiritual comfort.
Fr Byrne was among many people badly affected by the heat of January. After time spent in Epworth Hospital, he came to the realisation that his fierce independence would need to  give way to care at St Catherine’s, where the staff cared for with great dignity and where he died peacefully in the sixty second year of his priesthood.
Grant, we pray, O Lord,
That the soul of Fr Desmond Byrne, your servant and priest
Whom you honoured with sacred office
While he lived in this world,
May exult for ever in the glorious home of heaven. 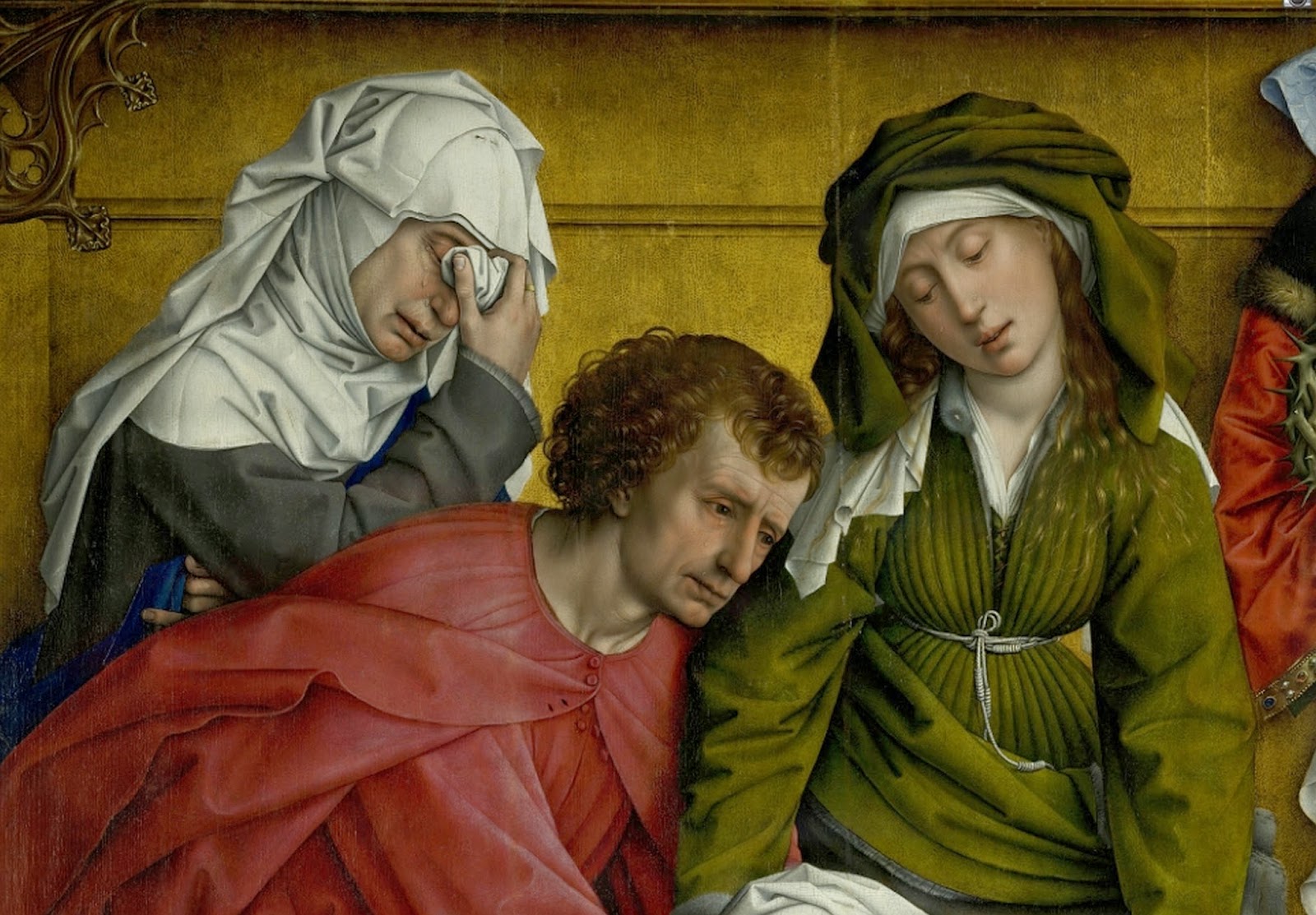 
source: http://www.ewtn.com/saintsHoly/saints/M/stmarycleophas.asp#ixzz1ratqr0YW
Posted by Jesus Caritas Est at 8:20 AM No comments: