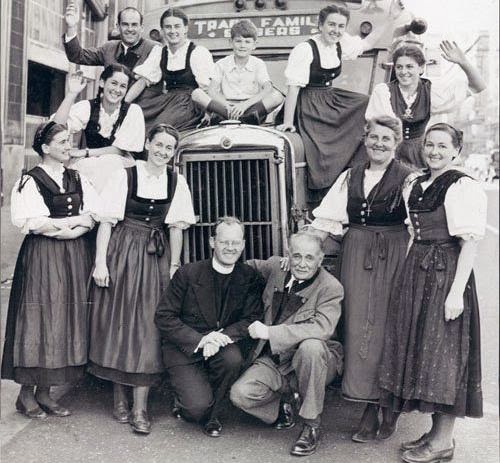 Maria von Trapp, the last surviving member of the Trapp family of seven died at home in Vermont at the age of 99 on Tuesday. Her family's story was told in The Sound of Music. Maria, (played by Louisa) was the second-eldest daughter of the Baron Georg's 1st wife Agathe Whitehead von Trapp. Her family fled their home in Austria to escape from the Nazis. They moved to Vermont in the U.S. This story inspired a musical and the popular 1965 movie The Sound of Music starring Julie Andrews. Baron Von Trapp married Maria Augusta Kutschera. They went on to have three children, Rosmarie, Eleanore and Johannes. 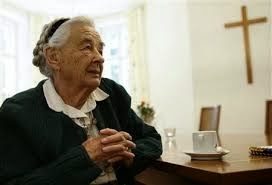 Posted by Jesus Caritas Est at 9:12 PM No comments:

(Vatican Radio) Pope Francis created nineteen new Cardinals on Saturday, the Feast of the Chair of St Peter the Apostle. The newly created Cardinals received the insignia of their office – the red biretta and the cardinal’s ring – in a streamlined ceremony conducted entirely in Latin.

Eighteen of the new princes of the Church were present, while Cardinal Loris Capovilla, the 98 year-old former secretary to Bl. John XXIII and Archbishop-emeritus of Chieti-Vasto in Italy, was created in absentia.

A very special guest was on hand, as well: Pope-emeritus Benedict XVI, whom Pope Francis had invited to share in the occasion. The Pope and the Pope-emeritus embraced warmly and exchanged greetings before the ceremony began.

In his allocution, Pope Francis encouraged the whole College of Cardinals to recognize their office as one of service and readiness for sacrifice. “The Church needs your courage, to proclaim the Gospel at all times,” said Pope Francis, “both in season and out of season, and to bear witness to the truth.”

The Holy Father went on to say, “The Church needs your prayer for the progress of Christ’s flock,” reminding the Cardinals that prayer, along with the proclamation of the Word, is the primary task of the Bishop.

Calling on the Cardinals to pray especially for suffering peoples, and to express with him their spiritual closeness to the ecclesial communities and to all Christians suffering from discrimination and persecution, he said, “The Church needs us also to be peacemakers, building peace by our words, our hopes and our prayers.”

On Sunday, February 23rd, Pope Francis shall celebrate Mass with the new Cardinals in St. Peter’s Basilica at 10 AM Rome Time.

Below, please find a list of the names of the new Cardinals, with brief biographical sketches.

PIETRO PAROLIN
Part of the Holy See’s diplomatic corps since 1986, he was Apostolic Nuncio in Venezuela between 2009 and 2013, when Pope Francis nominated him Vatican Secretary of State.

LORENZO BALDISSERI
Previously Apostolic Nuncio in Brazil, where he welcomed Pope Benedict XVI on his visit in 2007, he was Secretary of the Congregation of Bishops from January 2012 until nominated Secretary General of the Synod of Bishops by Pope Francis in September 2013.

BENIAMINO STELLA
Part of the Holy See’s diplomatic corps since 1970, he was previously Apostolic Nuncio in Cuba and Colombia, and was nominated Prefect of the Congregation for the Clergy by Pope Francis in September 2013.

LEOPOLDO JOSÉ BRENES SOLÓRZANO
He obtained his Licentiate of Sacred Theology at the Pontifical Lateran University in Rome (Italy) and was nominated Metropolitan Archbishop of Managua (Nicaragua) by Pope John Paul II in March 2005.

GÉRALD CYPRIEN LACROIX, I.S.P.X.
Part of the “Institut Séculier Pie X” since 1975, he has been both Secretary General and Director General of the institute, as well as Director General of its centre for spiritual formation “Maison du Renouveau”. He was nominated Metropolitan Archbishop of Québec (Canada) by Pope Benedict XVI in February 2011.

ORANI JOÃO TEMPESTA, O. CIST.
A member of the Cistercian Order since 1969, he was Prior of the São Bernardo monastery in São José do Rio Pardo (Brazil) from 1984 until the monastery became an abbey in 1996, when he was elected its first Abbott. Previously President of Brazil’s National Commission for Culture, Education and Social Communications, he was nominated Metropolitan Archbishop of São Sebastião do Rio de Janeiro (Brazil) in February 2009, in which capacity he welcomed Pope Francis on his visit in July 2013.

GUALTIERO BASSETTI
He was previously a member of the Episcopal Commission of the Italian Episcopal Conference for the Clergy and Consecrated Life, and a member of the Managing Board of the Catholic Committee for Cultural Collaboration with Orthodox Churches of the Byzantine tradition and Eastern Orthodox Churches. He is currently Vice-President of the Italian Episcopal Conference for Central Italy, and Archbishop of Perugia-Città della Pieve (Italy).

MARIO AURELIO PIOLI
Having graduated as Doctor of Philosophy in Theology from the Pontifical Catholic University of Argentina, he was appointed there as professor of Ecclesiastical History in 1980. He is currently President of the Episcopal Commission for Catholic Education and of the Episcopal Commission for Ministries with the Argentinian Episcopal Conference, and was nominated Metropolitan Archbishop of Buenos Aires (Argentina) by Pope Francis in March 2013.

ANDREW YEOM SOO-JUNG
Archbishop of Seoul (South Korea) since May 2012, he previously occupied a series of senior administrative posts within parishes and seminaries across South Korea.

PHILIPPE NAKELLENTUBA OUEDRAOGO
Previously a member of the Congregation for the Evangelization of Peoples, he was nominated Metropolitan Archbishop of Ouadraogo (Burkina Faso) by Pope Benedict XVI in May 2009.

ORLANDO QUEVEDO, O.M.I.
Already a member of the Missionary Oblates of Mary Immaculate, he graduated in Pedagogy from the University of Santo Tomas in Manila (Philippines). He was appointed first Bishop of Kidapawan (Philippines) when the diocese was created in November 1982, and nominated Metropolitan Archbishop of Cotabato (Philippines) by Pope John Paul II in 1998.

CHIBLY LANGLOIS
Nominated Bishop of Les Cayes (Haiti) by Pope Benedict XVI in August 2011, he was previously professor of Pastoral Theology at the Grand Séminaire Notre-Dame in Port-au-Prince (Haiti) and professor at the Diocesan Institute for Human Education and Promotion in Jacmel (Haiti).


LORIS FRANCESCO CAPOVILLA
A qualified journalist and former editor of a diocesan weekly magazine in Venice (Italy), he was secretary to Angelo Giuseppe Roncalli, later Pope John XXIII, first in Venice and then in the Vatican. He was Pontifical Delegate for the Shrine of the Holy House of Loreto (Italy) from 1971 until his retirement in 1988. At 98 years old, he is the third oldest archbishop in the world and the oldest member of the College of Cardinals.

SEBASTIÁN AGUILAR, C.M.F.
A member of the Missionary Sons of the Immaculate Heart of Mary and previously Bishop of León (Spain), he is Archbishop Emeritus of Pamplona (Spain), where he served from 1993 until his retirement in 2007.

KELVIN EDWARD FELIX
Having graduated as Doctor of Philosophy in Sociology from the University of Bradford (UK) in 1970, he was professor of Sociology at the University of the West Indies at Saint Augustine (Trinidad and Tobago) for many years. Previously President of the Caribbean Conference of Churches, President of the Antilles Episcopal Conference, member of the Pontifical Council for the Family and member of the Pontifical Council for Inter-religious Dialogue, he is Archbishop Emeritus of Castries (Saint Lucia), where he led the diocese from his appointment in 1981 until his retirement in 2008.

Text from Vatican Radio website
Posted by Jesus Caritas Est at 7:32 AM No comments: