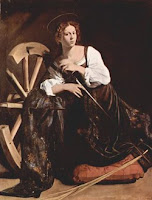 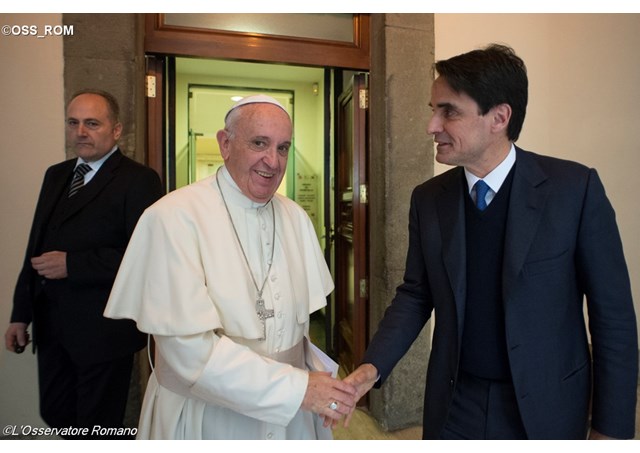 Vatican City, 24 November 2015 (VIS) – This morning, at around 10.30, the Holy Father visited the premises of the Institute for the Works of Religion (IOR) where he spoke with the Board of Directors for approximately twenty minutes, during which he communicated the appointment of the new Director general, Dr. Gian Franco Mammi, to be assisted by Dr. Giulio Mattietti pending the selection of a new Deputy Director.
Published by VISarchive 02 - Tuesday, November 24, 2015 0 commenti

First hearing in trial for the disclosure of confidential information

The representative for the injured party, i.e. the Holy See, was not present.

After the reading of the criminal charges by the chancellor, the president communicated that he had forwarded to the Court of Appeal the request for the appointment of two further private lawyers by Nuzzi and Msgr. Vallejo Balda, for eventual authorisation.

Two preliminary objections were heard, by Bellardini regarding the time limits for evidence for the defence, and – following a declaration by Fittipaldi – from Musso on the nullity of the writ served on Fittipaldi due to a lack of precision regarding the alleged offences.

The promotor of justice, in the person of Professor Zannotti, responded to the second objection, arguing that the intention was not to violate the freedom of the press, but that the defendant was required to respond regarding the activities conducted to obtain the published information and documents, and that this had been specified in the writ.

The panel of judges, after a meeting in the chamber lasting three quarters of an hour, rejected the two objections present and established the date of the next hearing, to be held on Monday 30 November at 9.30 a.m., during which the questioning of defendants will commence, starting with Msgr. Vallejo Balda, followed by Francesca Chaouqui, and then the other defendants. Various hearings are expected to be held during that week.

The hearing was closed before midday.

- Fr. Steven Joseph Lopes as ordinary bishop of the Personal Ordinariate of “The Chair of St. Peter”, United States of America. The bishop-elect was born in Fremont, United States of America on 22 April, and was ordained a priest in 2001. He holds a doctorate in theology from the Pontifical Gregorian University in Rome, and is currently an official of the secretariat of the Congregation for the Doctrine of the Faith. He succeeds Bishop Jeffrey N. Steenson, whose resignation from the pastoral ministry of the same Personal Ordinariate in accordance with canon 401 para. 2 of the Code of Canon Law.

Bishop-elect McAleenan was born in Belfast, Northern Ireland in 1951 and was ordained a priest in 1985. He has served in a number of pastoral roles in the archdiocese of Westminster, including parish vicar and parish priest. He is currently canon of Westminster Cathedral.

Bishop-elect Wilson was born in Sheffield, England in 1968, was baptised in the Anglican Communion and received in the Catholic Church in 1985. He was ordained a priest in 1995. He holds a bachelor's degree in theology and religious studies from the University of Leeds, England, a bachelor's degree in theology from the Pontifical Gregorian University, Rome, a licentiate in moral theology from the Alphonsianum of Rome and a doctorate in ethics from the University of Durham, England. He has served in a number of pastoral and academic roles in the diocese of Leeds, including parish vicar, professor of moral theology, episcopal vicar for evangelisation, and apostolic administrator. He is currently parish priest in Wakefield, Yorkshire. In 2011 he was named Chaplain of His Holiness.

Posted by Jesus Caritas Est at 4:33 PM No comments: 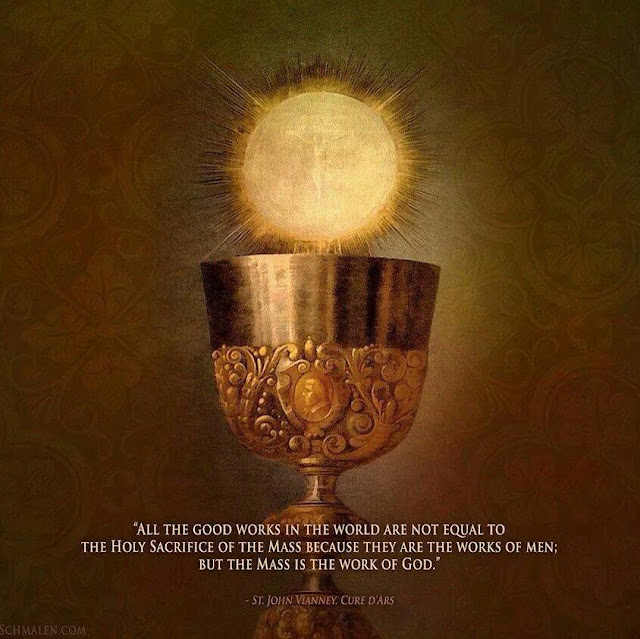 Daniel said to Nebuchadnezzar:
“In your vision, O king, you saw a statue,
very large and exceedingly bright,
terrifying in appearance as it stood before you.
The head of the statue was pure gold,
its chest and arms were silver,
its belly and thighs bronze, the legs iron,
its feet partly iron and partly tile.
While you looked at the statue,
a stone which was hewn from a mountain
without a hand being put to it,
struck its iron and tile feet, breaking them in pieces.
The iron, tile, bronze, silver, and gold all crumbled at once,
fine as the chaff on the threshing floor in summer,
and the wind blew them away without leaving a trace.
But the stone that struck the statue became a great mountain
and filled the whole earth.

“This was the dream;
the interpretation we shall also give in the king’s presence.
You, O king, are the king of kings;
to you the God of heaven
has given dominion and strength, power and glory;
men, wild beasts, and birds of the air, wherever they may dwell,
he has handed over to you, making you ruler over them all;
you are the head of gold.
Another kingdom shall take your place, inferior to yours,
then a third kingdom, of bronze,
which shall rule over the whole earth.
There shall be a fourth kingdom, strong as iron;
it shall break in pieces and subdue all these others,
just as iron breaks in pieces and crushes everything else.
The feet and toes you saw, partly of potter’s tile and partly of iron,
mean that it shall be a divided kingdom,
but yet have some of the hardness of iron.
As you saw the iron mixed with clay tile,
and the toes partly iron and partly tile,
the kingdom shall be partly strong and partly fragile.
The iron mixed with clay tile
means that they shall seal their alliances by intermarriage,
but they shall not stay united, any more than iron mixes with clay.
In the lifetime of those kings
the God of heaven will set up a kingdom
that shall never be destroyed or delivered up to another people;
rather, it shall break in pieces all these kingdoms
and put an end to them, and it shall stand forever.
That is the meaning of the stone you saw hewn from the mountain
without a hand being put to it,
which broke in pieces the tile, iron, bronze, silver, and gold.
The great God has revealed to the king what shall be in the future;
this is exactly what you dreamed, and its meaning is sure.”

Then they asked him,
“Teacher, when will this happen?
And what sign will there be when all these things are about to happen?”
He answered,
“See that you not be deceived,
for many will come in my name, saying,
‘I am he,’ and ‘The time has come.’
Do not follow them!
When you hear of wars and insurrections,
do not be terrified; for such things must happen first,
but it will not immediately be the end.”
Then he said to them,
“Nation will rise against nation, and kingdom against kingdom.
There will be powerful earthquakes, famines, and plagues
from place to place;
and awesome sights and mighty signs will come from the sky.”
Posted by Jesus Caritas Est at 9:52 AM No comments: 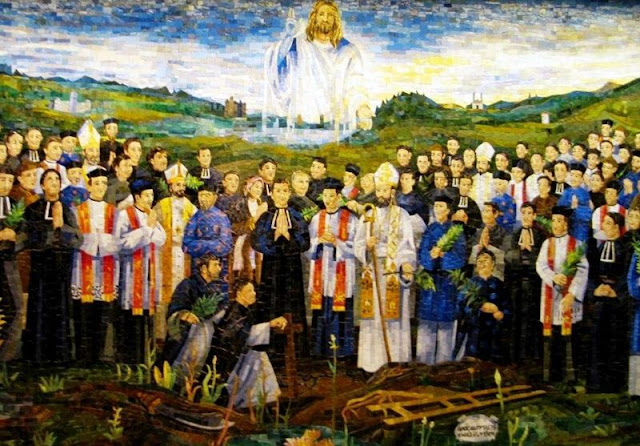 Feast Day:November 24
Born:
1785 in Vietnam
Died:
21 December 1839 in Hanoi, Vietnam
Canonized:
19 June 1988 by Pope John Paul II
Vietnamese priest and martyr and companion of St. Peter Thi. Andrew was arrested and beheaded on Dcember 21, 1839, with Peter Thi during the harsh anti-Christian persecutions. He was canonized in 1988.(Taken from Our Sunday Visitor’s Encyclopedia of Saints)
Posted by Jesus Caritas Est at 8:17 AM No comments: