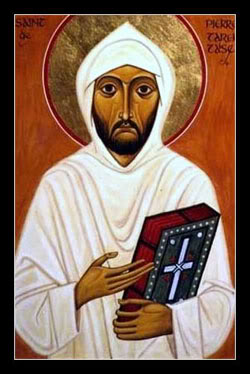 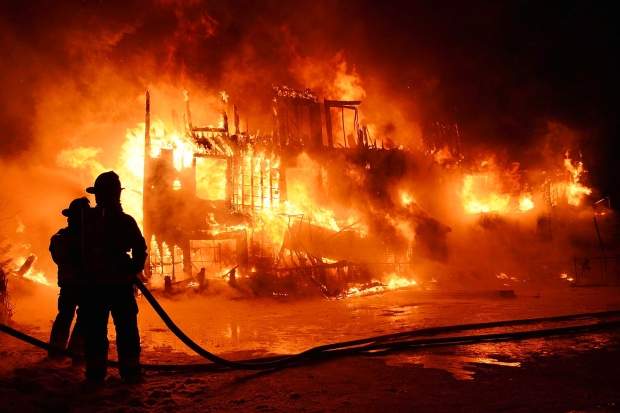 A Canadian wildfire in Fort McMurray, Alberta, has forced an entire town's evacuation. Military planes are on firefighting duty and there are over 88,000 people displaced at oil field camps north of Fort McMurray. Police and military also airlifted of evacuees.One Wildfire victim said: 'It was driving through hell'. The fire is still growing and coming near the neighboring province of Saskatchewan,  Dry and extremely windy conditions are keeping the fire going. It has already burned more than 1,560 square kilometers (602 square miles). Minister Ralph Goodale said Saturday, "The situation remains unpredictable and dangerous".  It has destroyed at least 1,600 structures and sent smoke as far as Iowa.  More than 1,400 firefighters and 133 helicopters are fighting blazes across the province. No fatalities are directly related to the fire.  The wildfire began Sunday, May 1, and had torched 24,710 acres by Wednesday. The cause of the fire was unclear.  Some 15,000 people remain stranded north of the city, but not all will leave. Many evacuees are will end up in Edmonton, the provincial capital some 236 miles to the south, or Calgary. Temporary shelters are being set up. The fire is so large that once brought under control it will burn in some places for "weeks and weeks,"
Posted by Jesus Caritas Est at 10:08 PM No comments:

#PopeFrancis to #SwissGuards "“Dear Guardsmen, my hope for you is that you shall live your days of service strong in the Faith...' Video - Text 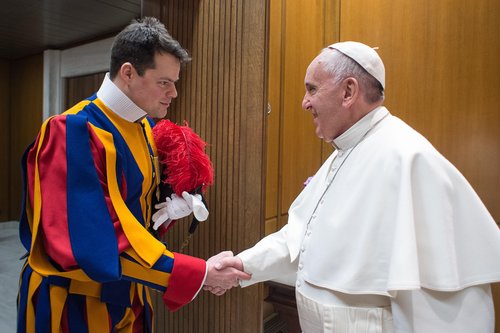 (Vatican Radio) Pope Francis received officers and enlisted soldiers of the Pontifical Swiss Guard on Saturday, one day after new members of the corps took their oath of allegiance and were sworn into active service.

The Swiss Guards hold their swearing-in ceremony each year on May 6th, to mark the day in 1527 when 147 members of their corps gave their lives in a desperate rear-guard action that allowed Pope Clement VII to reach the safety of Castel Sant’Angelo while the soldiers of Holy Roman Emperor Charles V sacked the eternal city.
Pope Francis recalled the spirit of faithful service that animates the great legacy of sacrifice and heroism in his remarks to new recruits and their families on Saturday, saying, “Dear Guardsmen, my hope for you is that you shall live your days of service strong in the Faith and generous in charity toward the people you shall meet: may Mary, our mother, whom we honor especially in this month of May, help you to be ever more sensible each day that profound communion with God, which for us believers begins here on Earth and shall be complete in Heaven.”
Posted by Jesus Caritas Est at 8:30 PM 1 comment: 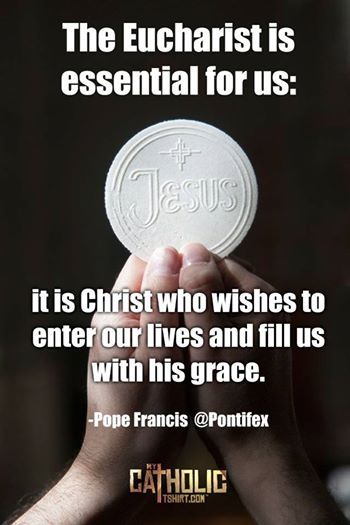 Saturday of the Sixth Week of Easter
Lectionary: 296

After staying in Antioch some time,
Paul left and traveled in orderly sequence
through the Galatian country and Phrygia,
bringing strength to all the disciples.

A Jew named Apollos, a native of Alexandria,
an eloquent speaker, arrived in Ephesus.
He was an authority on the Scriptures.
He had been instructed in the Way of the Lord and,
with ardent spirit, spoke and taught accurately about Jesus,
although he knew only the baptism of John.
He began to speak boldly in the synagogue;
but when Priscilla and Aquila heard him,
they took him aside
and explained to him the Way of God more accurately.
And when he wanted to cross to Achaia,
the brothers encouraged him
and wrote to the disciples there to welcome him.
After his arrival he gave great assistance
to those who had come to believe through grace.
He vigorously refuted the Jews in public,
establishing from the Scriptures that the Christ is Jesus.

Jesus said to his disciples:
“Amen, amen, I say to you,
whatever you ask the Father in my name he will give you.
Until now you have not asked anything in my name;
ask and you will receive, so that your joy may be complete.

“I have told you this in figures of speech.
The hour is coming when I will no longer speak to you in figures
but I will tell you clearly about the Father.
On that day you will ask in my name,
and I do not tell you that I will ask the Father for you.
For the Father himself loves you, because you have loved me
and have come to believe that I came from God.
I came from the Father and have come into the world.
Now I am leaving the world and going back to the Father.”
Posted by Jesus Caritas Est at 2:42 PM No comments:

#Novena to the Holy Spirit for #Pentecost SHARE this Prayer 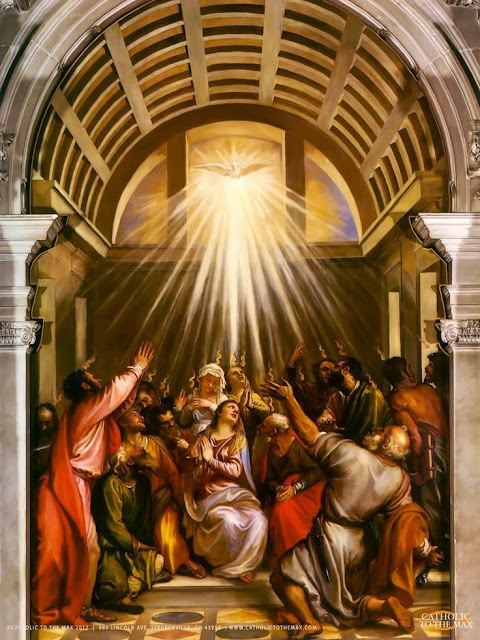 ACT OF CONSECRATION TO THE HOLY GHOST
On my knees before the great multitude of heavenly witnesses I offer myself, soul and body to You, Eternal Spirit of God. / I adore the brightness of Your purity the unerring keenness of Your justice and the might of Your love. You are the Strength / and Light of my soul. In You I live and move and am. I desire never to grieve You by unfaithfulness to grace and I pray with all my heart! To be kept from the smallest sin against You. Mercifully guard my every thought and grant that I may always watch for Your light: and listen to Your voice and follow Your gracious inspirations. I cling to You and give myself to You and ask You / by Your compassion to watch over me in my weakness. Holding the pierced Feet of Jesus and looking at His Five Wounds / and trusting in His Precious Blood and adoring His opened Side and stricken Heart / I implore You / Adorable Spirit I Helper of my infirmity, so to keep me in Your grace that I may never sin against You. Give me grace O Holy Ghost, Spirit of the Father and the Son to say to You always and everywhere / "Speak Lord for Your servant heareth." Amen.


FIRST DAY OF THE NOVENA

Holy Spirit! Lord of Light!
From Your clear celestial height,
Your pure beaming radiance give!
Prayer

Almighty and eternal God, Who hast vouchsafed to regenerate us by water and the Holy Ghost, and hast given us forgiveness all sins, vouchsafe to send forth from heaven upon us your sevenfold Spirit, the Spirit of Wisdom and Understanding, the Spirit of Counsel and fortitude, the Spirit of Knowledge and Piety, and fill us with the Spirit of Holy Fear. Amen.

(Our Father and Hail Mary ONCE. Glory be to the Father 7 TIMES. Act of Consecration, Prayer for the Seven Gifts)

Posted by Jesus Caritas Est at 1:13 PM No comments: