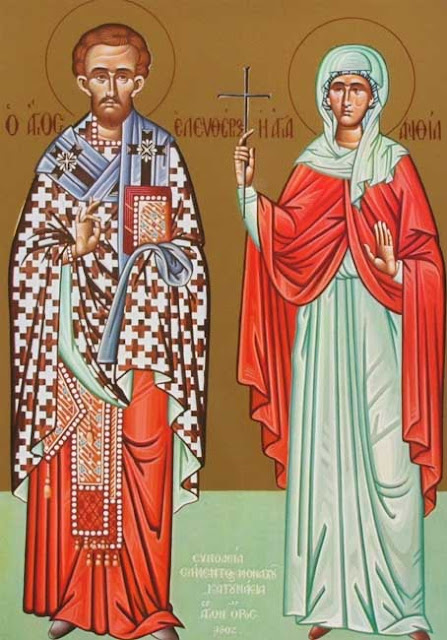 (French ELEUTHERE). Bishop of Tournai at the beginning of the sixth century. Historically there is very little known about St. Eleutherius, but he was without doubt the first Bishop of Tournai. Theodore, whom some give as his immediate predecessor, was either a bishop of Tours, whose name was placed by mistake on the episcopal list of Tournai, or simply a missionary who ministered to the Christians scattered throughout the small Frankish Kingdom of Tournai. Before he became bishop, Eleutherius lived at court with his friend Medardus, who predicted that he would attain the dignity of a count and also be elevated to the episcopate. After Clovis, King of the Franks, had been converted to Christianity, in 496, with more than 3000 of his subjects, bishops took part in the royal councils. St. Remigius, Bishop of Reims, organized the Catholic hierarchy in Northern Gaul, and it is more than likely that St. Eleutherius was named Bishop of Tournai at this time.His cult, however, is well established; there is record of a recovery of his relics during the episcopate of Hedilo in 897 or 898, and a translation of them by Bishop Baudoin in 1064 or 1065, and another in 1247. Relics of this saint were also preserved in the monastery of St. Martin at Tournai, and in the cathedral at Bruges. His feast is given in martyrologies on 20 or 21 July, but is usually celebrated on the former date. The translation of his relics is commemorated 25 August. Shortened bio from the Catholic Encyclopedia Image source : http://full-of-grace-and-truth.blogspot.ca/
Posted by Jesus Caritas Est at 9:43 PM No comments: 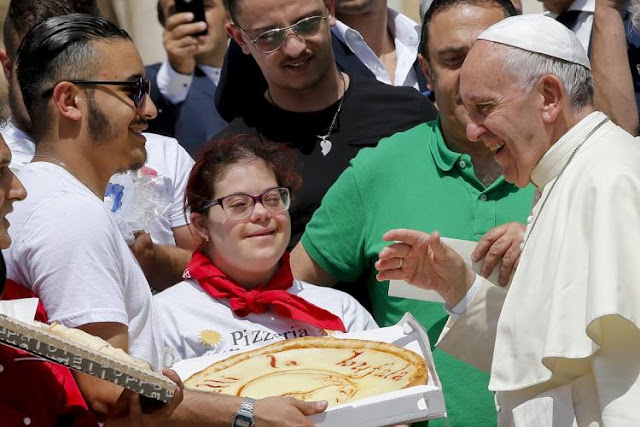 Pope Francis is offered Neapolitan pizza to 1,500 people that was served Sunday afternoon in the atrium of the Paul VI Hall after the canonization of Mother Teresa.
Those invited included the poor and needy, especially from the houses of the Sisters of Mother Teresa. The poor were from all over Italy including Milan, Bologna, Florence, Naples and all the houses in Rome.


The lunch was served by around 250 Sisters of Mother Teresa, 50 Brothers of the congregation for men and other volunteers. The poor were also invited to attend the Canonization Mass.

Posted by Jesus Caritas Est at 2:42 PM No comments:

#PopeFrancis "... by participating in the Sacraments and meditating on Scripture, Christians..." Sept. Prayer Intention + Video

THE POPE'S MONTHLY PRAYER INTENTIONS
September 2016
Universal Intention - Centrality of the Human Person. "That each may contribute to the common good and to the building of a society that places the human person at the center."
Evangelization Intention - Mission to Evangelize. "That by participating in the Sacraments and meditating on Scripture, Christians may become more aware of their mission to evangelize."
Posted by Jesus Caritas Est at 2:23 PM No comments: 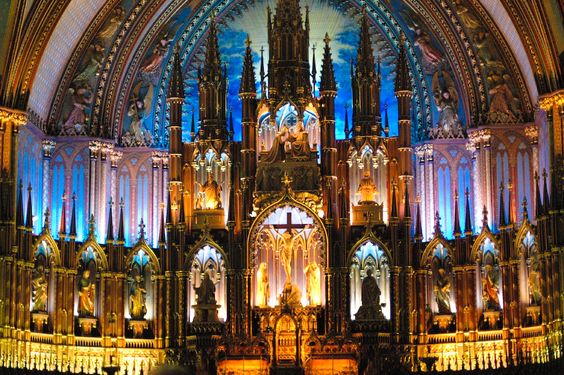 Monday of the Twenty-third Week in Ordinary Time
Lectionary: 437

Brothers and sisters:
It is widely reported that there is immorality among you,
and immorality of a kind not found even among pagans–
a man living with his father’s wife.
And you are inflated with pride.
Should you not rather have been sorrowful?
The one who did this deed should be expelled from your midst.
I, for my part, although absent in body but present in spirit,
have already, as if present,
pronounced judgment on the one who has committed this deed,
in the name of our Lord Jesus:
when you have gathered together and I am with you in spirit
with the power of the Lord Jesus,
you are to deliver this man to Satan
for the destruction of his flesh,
so that his spirit may be saved on the day of the Lord.

Your boasting is not appropriate.
Do you not know that a little yeast leavens all the dough?
Clear out the old yeast, so that you may become a fresh batch of dough,
inasmuch as you are unleavened.
For our Paschal Lamb, Christ, has been sacrificed.
Therefore, let us celebrate the feast,
not with the old yeast, the yeast of malice and wickedness,
but with the unleavened bread of sincerity and truth.

On a certain sabbath Jesus went into the synagogue and taught,
and there was a man there whose right hand was withered.
The scribes and the Pharisees watched him closely
to see if he would cure on the sabbath
so that they might discover a reason to accuse him.
But he realized their intentions
and said to the man with the withered hand,
“Come up and stand before us.”
And he rose and stood there.
Then Jesus said to them,
“I ask you, is it lawful to do good on the sabbath
rather than to do evil,
to save life rather than to destroy it?”
Looking around at them all, he then said to him,
“Stretch out your hand.”
He did so and his hand was restored.
But they became enraged
and discussed together what they might do to Jesus.
Posted by Jesus Caritas Est at 9:48 AM No comments: